by Jules Gomes  •  ChurchMilitant.com  •
ISIS mocks ‘Abrahamic religions,’ threatening fresh attacks on Christians
You are not signed in as a Premium user; we rely on Premium users to support our news reporting. Sign in or Sign up today!

MOSUL, Iraq (ChurchMilitant.com) – Islamic State (ISIS) is threatening fresh attacks on Iraqi churches following Pope Francis’ visit, with an ultimatum that its jihadists “will remove their crosses very soon” as they did “the first time, with Allah’s permission.”

Al-Naba editorial obtained and translated by Church Militant
In a blistering editorial in its Arabic weekly, Al-Naba, the world’s most feared terrorist outfit is interpreting Francis’ interfaith overtures in Iraq as a “crusade” to “remove the shariah of Allah from this land and to establish polytheistic religion in its place” by “lifting his profane cross over the ruins of Mosul.”

Church Militant obtained a copy of the anti-papal polemic and commissioned an English translation of the editorial titled “Messages of the Christian Idolator-Tyrant [Taghut al-Nasara al-Baba] on His Visit to Iraq,” published in the 277th issue of Al-Naba, on March 11. 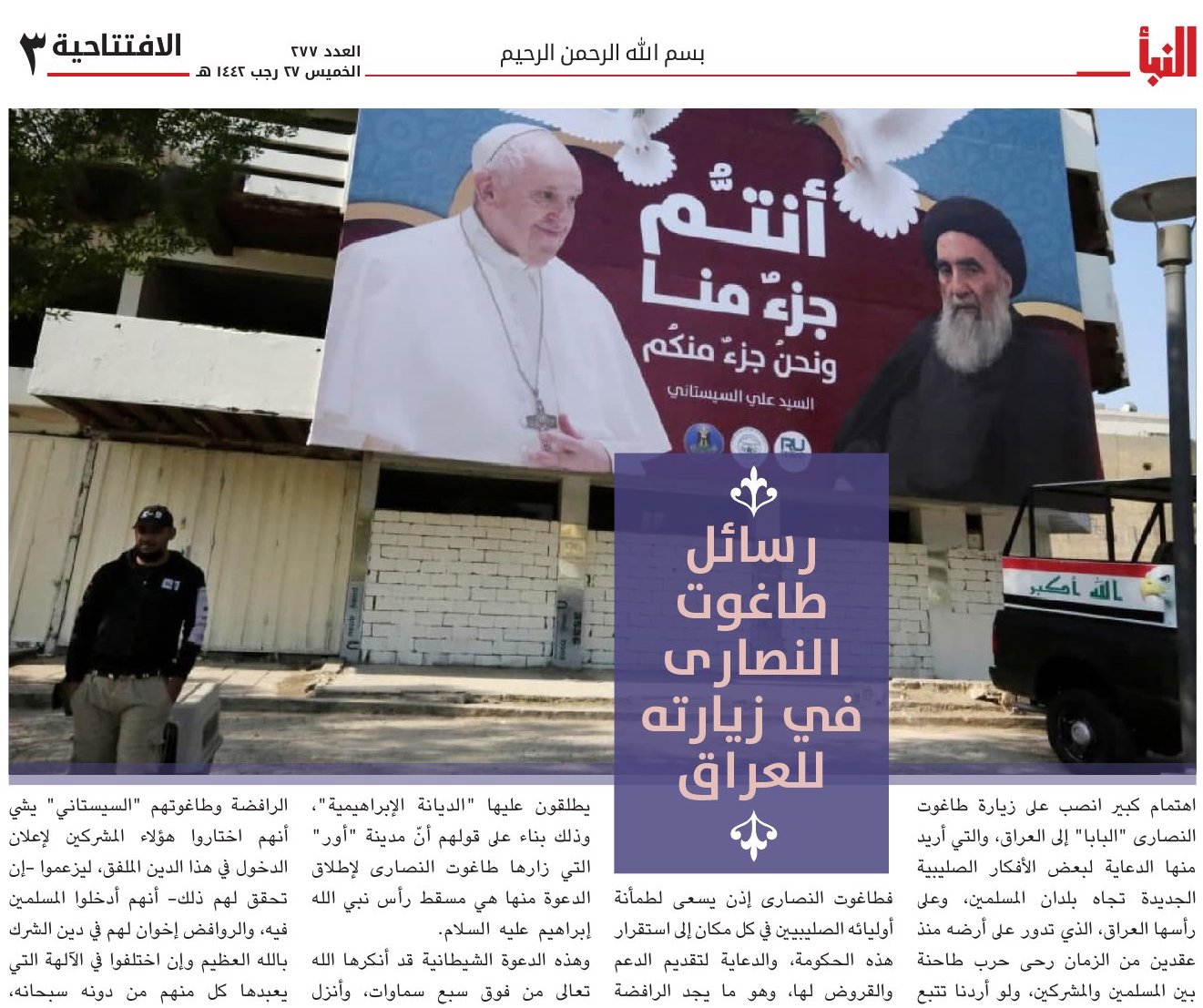 Eminent Islamic scholar Robert Spencer explained to Church Militant the significance of the appellation taghut al-nasara (used eight times in the editorial to describe Pope Francis): “Taghut refers to idols or idolaters, nasara is the Qur’an’s word for Christians and al-baba is the pope. So taghut al-nasara al-baba is ‘the Christian idolater’ — the pope.”

Tyrannical rulers who arrogate God’s absolute power and use it to oppress people are also called taghut. In modern Iran, the term was applied to Shah Mohammad Reza Pahlavi.

ISIS claims the pope’s visit “is for propagating new crusader ideas towards Muslim countries, especially Iraq, which has been the site of a grinding war for the last two decades between the Muslims and the mushrikeen.”

Francis almost certainly doesn’t know that the Qur’an says that ‘the Jews and the Christians will never be satisfied with you until you follow their religion.’Tweet
Mushrikeen are “polytheists” who commit the unforgivable sin of “shirk” by attributing the unique qualities of Allah to others. Christians are ostensibly mushrikeen because they attribute God’s unique characteristics to Jesus.

The Al-Naba editorial reserves its most acerbic attack on Francis’ interreligious event in Ur, accusing the “Christian idolator-tyrant” of “unleashing an invitation to a new religion of unbelief and atheism” by fostering a convergence of Catholics, Jews and the “the idolator-tyrants [taghut] of Muslim countries.”

According to the editorial:

The so-called “Abrahamic religions” — whether true or false — are said to belong to Ibrahim, the prophet of Allah, and based on the claim that the city of Ur, which the Christian idolator-tyrant visited and from where he launched his campaign for this new religion is the birthplace of Ibrahim, the prophet of Allah.
Excoriating the designation of “Abrahamic religions” as “satanic” for “attributing their false religions to Ibrahim,” the ISIS editorial quotes the Qur’anic verse Surah 3:67: “Ibrahim was neither a Jew nor a Christian, but he was an upright Muslim; he was not an idolater.”

Spencer, author of 21 books on Islam and the Middle East, explained that the claim “may seem strange to Westerners in light of the fact that Islam was born 600 years after Jesus.”

“But in the Islamic scheme of things, Islam was the original religion of all the biblical prophets,” Spencer emphasized, noting that Muslims regard Judaism and Christianity as false religions which corrupted the prophetic teachings. “This idea is mainstream Islam, not just the province of ‘extremists.'”

Francis would most likely be shocked to find that his very attempts at peace and conciliation are viewed as provocations.Tweet
Spencer explained that Muslims would view the pope as profaning Mosul by lifting his cross over it because “in Islam, Jesus was not crucified (cf. Qur’an 4:157), and to affirm otherwise is to suggest that Allah is not strong enough to protect his prophets.”

The author of the bestseller The History of Jihad: From Muhammad to ISIS elaborated:

Above all, the document criticizes the pope for supposedly wanting to create a new Abrahamic religion based on his “dialogue” with Muslim leaders. Francis would most likely be shocked to find that his very attempts at peace and conciliation are viewed as provocations. But this is yet another example of his getting involved in affairs that he only dimly understands at best and creating more problems than he is solving.
Francis almost certainly doesn’t know that the Qur’an says that “the Jews and the Christians will never be satisfied with you until you follow their religion” (Qur’an 2:120). So even his outreach is viewed as a sinister attempt to seduce Muslims away from Islam.
While the Al-Naba editorial eviscerates Francis’ interreligious program in southern Iraq as religious opportunism, it castigates the pope’s visit to Baghdad as “a message of support endorsing this government of idolatrous criminals.” 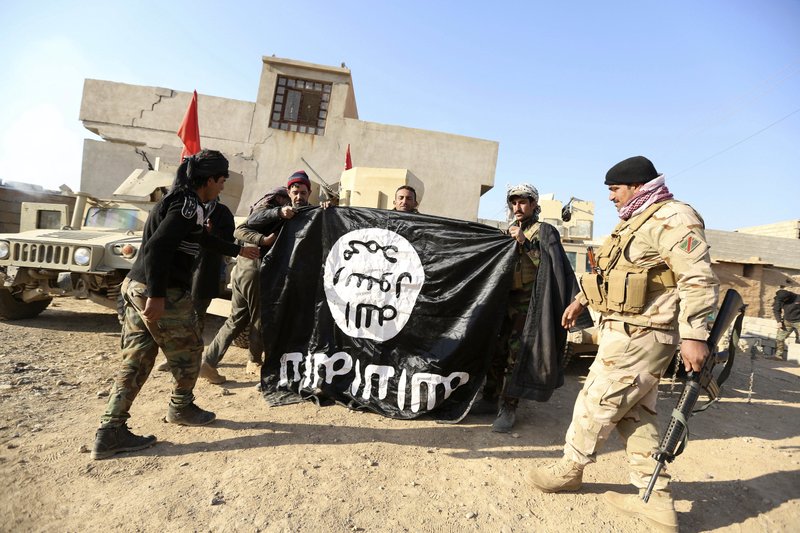 ISIS declares its supremacy over Iraq
Claiming that Islamic State still controls much of Iraq, the editorial describes the visit as a “showcase for the stability of the government with visitors being kept in the illusion of security” and as “propaganda designed to reassure the pope’s crusader friends [Western governments]” and to get them to give loans to a debt-riddled Iraqi state.

“It cannot be ruled out that this religious visit by the Christian idolator-tyrant has purely economic goals,” the editorial states, positing that “some parties seem to have fully funded it to provide moral support to the rafidite government as a reward for securing important contracts which might become public under some other pretext or might be kept strictly private.”

Rafidites (rejectionists), a term of abuse given by Sunnis to Shias, is used to describe Shias rejecting the first four caliphs after Muhammad. Shias believe that the fourth caliph, Ali — Muhammad’s son-in-law — should have succeeded the prophet of Islam as the religion’s head.

It cannot be ruled out that this religious visit by the Christian idolator-tyrant has purely economic goals.Tweet
The Sunni Al-Naba blasts Iraqi’s Shia rulers and the papal meeting with Shia Grand Ayatollah Ali al-Sistani as “brothers in the religion of shirk [idolatry — assigning partners to Allah] even if they disagree in the deities that they worship.” 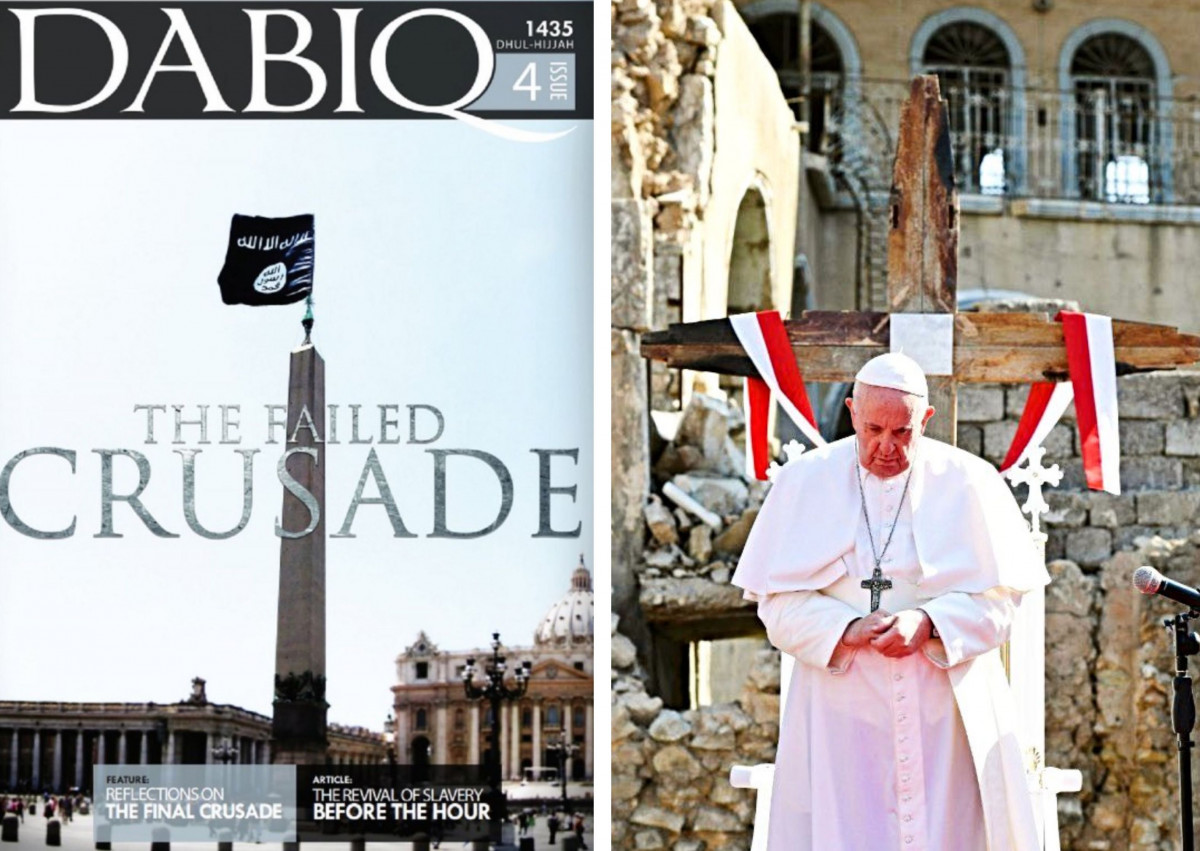 ISIS journal Dabiq on
Vatican Crusade, Pope Francis in Mosul
Islamic State is full of praise for “Isa” (Jesus), for He “did not worship what they worship, nor did He worship the rafidites’ imams, nor did He obey the taghuts which they worshipped besides Allah, but peace be upon Him, He was innocent of shirk.”

The Al-Naba editorial concludes by “supplicating Allah that this visit of the Christian idolator-tyrant would be his last visit to any of the Muslim countries and that Allah would empower us on him and on all his followers.”

In light of the ISIS editorial, Spencer laments that “Francis’ peace outreach may end up getting even more Christians killed than would have been if he had left Islam well-enough alone and stuck to preaching the gospel.”

The Al-Naba issue is significant as it is the most recent which directly addresses Christians following the earlier issues of the ISIS magazine Dabiq — published in English and other languages — which dedicates two entire issues of the journal to the anti-Christian themes of “breaking the Cross” and “the failed crusade.”

Church Militant contacted the Holy See Press Office asking if the Vatican was aware of the new ISIS threats to Iraqi Christians in the run-up to Holy Week. We received no response as of press time.