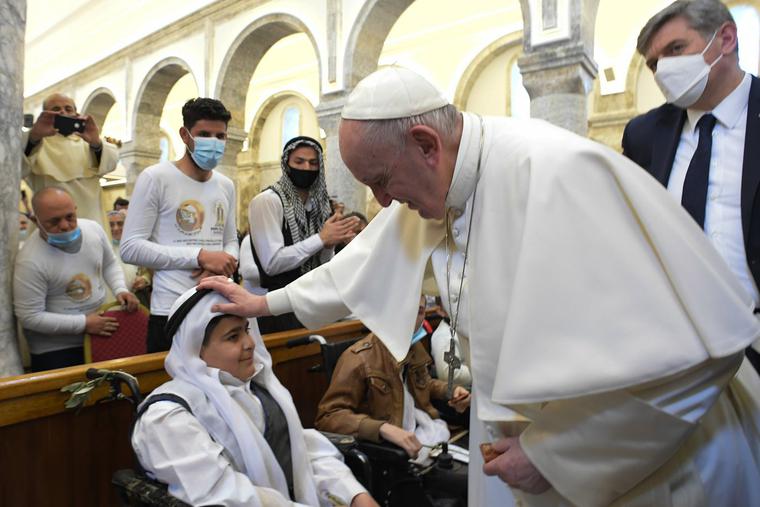 While they are joyful and grateful for the visit, they also stress the importance of building on the pilgrimage’s momentum in order to secure lasting improvement.
Pope Francis blesses a young boy during his visit to the Church of the Immaculate Conception in Bakhdida (Qaraqosh), Iraq, March 7. (photo: Vatican Media/National Catholic Register)
Edward Pentin World March 12, 2021
VATICAN CITY — “Miraculous,” “unbelievable” and “incredibly uplifting” is how Iraqi Christians have described Pope Francis’ historic pilgrimage to their homeland as they look with hope toward a more peaceful and fraternal future.

Commenting to the Register in the days following the March 5-8 visit, Church leaders and local citizens expressed their joy and gratitude for the visit but also a clear awareness of the importance of building on the momentum of the pilgrimage to ensure it brings concrete improvements to their lives and country.

“The visit was unbelievable — Muslims, Christians and Yazidis are all very, very happy,” said Chaldean Archbishop Najeeb Michaeel of Mosul. “This isn’t normal, but something exceptional and very rare, because this pilgrimage of the Pope was a spiritual visit for us.”

The Pope’s words in Mosul, a once-predominantly-Christian city devastated by the Islamic State militant group (ISIS) from 2014 to 2017, “were like a diamond,” Archbishop Michaeel said, “very spiritual, human and divine words to unite humanity.”

The Dominican archbishop, who accompanied Francis through the city on March 7, said he saw the Pope become quite emotional by what he saw.

“I could see tears in his eyes when he saw the massive destruction, the destroyed churches,” he recalled. “When I talked to him face-to-face, he put his finger to his eye and said, ‘I cannot control myself.’”

Rahmah Yaqoob Yousif, a final-year student in international relations at the Catholic University in Erbil, said the Pope’s visit “brought extreme joy and a real happiness for our hearts as a community.” A resident of Qaraqosh, a once-Christian city that the Pope visited immediately after Mosul, Yousif said in a land where “the people have suffered a lot,” the visit “gave us plenty of hope and love.”

Rashel Natheer Marzina, also a student at the Catholic University in Erbil, said Iraqi Christians had been waiting “a long time” for such a papal visit, and they also waited for hours, along with many others, to see the Pope during his visit. “The first moment I saw him in his car, I shouted and cried at the same time. I was very emotional,” she said. “Then his words in the church gave me hope and inner peace.”

Historic Visit
Pope Francis became the first pope in history to visit what was once Mesopotamia, one of the oldest Christian regions in the world evangelized by St. Thomas and St. Jude the Apostles. The land has been racked by conflict for decades, its Christians largely driven from the country. From 1.5 million in 2003, the country’s Christian population is estimated to be about 200,000 today.

Francis said he came as a “pilgrim of peace in the name of Christ, the Prince of Peace,” and he told reporters on the way there it was “an emblematic trip” and “a duty” to visit “a land that has been martyred for so many years.”

As well as visiting Qaraqosh, Mosul and Erbil, the Pope’s itinerary also included stops in Baghdad, where he celebrated Mass; Najaf, where he held a historic meeting with 90-year-old Grand Ayatollah Sayyid Ali al-Husayni al-Sistani (the most influential Shiite spiritual leader in the country); and Ur, the birthplace of the patriarch Abraham, where the Pope took part in an interreligious meeting with leaders of Islam, Yazidi and other religions.

Chaldean Archbishop Bashar Warda of Erbil, the capital of Kurdistan, where many refugees fled after ISIS invaded Mosul and the Nineveh Plains, said he found the visit to be “miraculous and incredibly uplifting,” adding it was “wonderful” the Pope could visit the “cradle of civilization.” Francis, he said, “sowed great seeds of forgiveness, hope and peace for the future.”

A particular highlight, the archbishop said, was the meeting between the Pope and Grand Ayatollah Ali al-Sistani, which sent out a “message of unity” that has been received “very positively by the people and the media throughout Iraq.”

“The Pope is setting a model of going to where the other is and is speaking to him as he has done in his other Middle East visits — this is what God wants us to do,” Archbishop Warda told the Register. He added that for the grand ayatollah to “mention Christian citizen rights rather than Iraqi rights is hugely significant, as we do not have citizen rights.”

He also remarked how the media have been “very supportive of the Pope and the papal visit,” adding that only the Pope could “unite and mobilize a people together, despite their differences, in a country constantly at war and in violence.”

“Fraternity and coexistence,” he pointed out, hasn’t been seen for decades, especially after the 2003 Iraq War and the invasion of ISIS. The Pope’s presence and messages, he added, “brought us together in one nationhood.”

Looking Forward
The question now is whether this wave of goodwill and restored hope will last. For Archbishop Michaeel, three things are needed for that to happen in Iraq: a change of heart to become truly alive and human; relations built with one another in groups who then share the Pope’s message through art and culture; and continuous communication with the government.

He believes the visit will have a positive effect on helping Christians to return — but not immediately.

“We need to start to prepare the place for them,” he said, “to give them confidence because they lost it and are afraid.”

The archbishop said they fear especially coming back to Mosul and then, perhaps only a month or a year later, Islamists return and attack again. Other problems are lack of jobs and security, although Archbishop Michaeel stressed that Mosul was now very safe. He cautioned that while ISIS is “finished” as a military group, “the ideology is still there.” But he believes it’s possible to “fight it though education, the media, mosques, churches and activities.”

Sally Salim of Qaraqosh said Christians who had fled were “depressed” to have to watch the visit from afar. However, she hopes they will return, but realizes it is difficult. As for Christians like her who have stayed the course, she believes the papal pilgrimage will encourage them to continue to remain, and she was sure the visit would help Christian-Muslim relations.

“We were refused as Christians, but now we’re seeing Muslims respect us, covering us in newspapers, on television and in social media,” Salim said. “Pope Francis made us feel more valued — we didn’t have this before.”

Salim, who said she didn’t believe the papal visit would ever happen, spoke of great celebrations before, during and after the trip and welcomed improvements to infrastructure and services in preparation for the event. It was a “truly fantastic, amazing event and an historic visit,” she said.

Archbishop Warda observed that the Iraqi media is “talking about building on the momentum of his visit, the chance for dialogue between all, and a new beginning to seek fraternal coexistence.” He underscored that “Christians contribute to Iraq through education and health care” and noted that the visit showed how much Christians, as a minority within Iraq, “have contributed to bringing a very divided country together.”

One hoped-for aspect of the trip that didn’t happen was the declaration of martyrdom for a number of priests and laity who were slain by Islamists in recent decades. They include 48 Syriac Catholic worshippers brutally murdered in Our Lady of Salvation Church in Baghdad in 2010; Father Ragheed Ganni, killed in 2007; and Archbishop Paolos Faraj Raho (Archbishop Michaeel’s predecessor in Mosul), killed in 2008.

But Archbishop Michaeel said he believed these beatifications would happen soon, “maybe during this year,” and that he talked about the possibility during a few moments he had alone with the Pope.

For now, though, the archbishop’s appeal to the faithful and the world is not to “encourage violence in our country or other countries, but help us through education, love and being an instrument of peace.”