Iraqi Christians in Baghdad have witnessed the first ever papal Mass held in an Iraqi church. The Pope is halfway through his historic trip.
The Pope held his service in a Catholic church but in accordance with Eastern rituals
On the second day of his visit to Iraq, Pope Francis delivered a Mass in the St. Joseph Chaldean Catholic cathedral in central Baghdad.

The Mass was the first time that the 84-year-old pontiff had presided over a liturgy in the Eastern Rite. Attendance was limited due to coronavirus restrictions.

He told the congregation that it was not the rich and powerful who were blessed “but rather those who show mercy to their brothers and sisters,” the German Catholic news agency KNA reported.

A subsequent tweet pointed out that social distancing had been “stretched thin” in the Cathedral with people seated less than six feet away and “poor ventilation.”

What is the Pope doing in Iraq?
Earlier in the day the head of the Catholic Church took part in a historic meeting with the top Shiite cleric in Iraq, Ayatollah Ali al-Sistani, in the holy city of Najaf. He also visited the location believed to be the birthplace of Abraham.

On Sunday, the Argentine Pope is planning on visiting the former Islamic State stronghold of Mosul before heading on to the Kurdish autonomous region where he will hold a Mass for thousands of people in a football stadium. 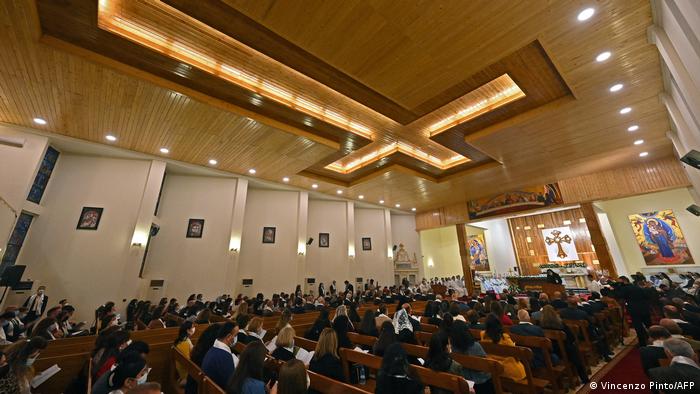 Experts had expressed concerns about the Pope’s visit leading to super spreader events
Iraq’s Christian community is one of the oldest in the world and includes Chaldean, Assyrian, Syrian-Orthodox and Syrian-Catholic Christians, as well as protestants.

Although they numbered some 1.5 million at the beginning of the 2000s, two decades of violence and religious and ethnic conflict led many to leave the country. Now only around 400,000 remain.