ERBIL, Kurdistan Region — Music floats through the backstreets of Erbil’s Christian neighbourhood of Ainkawa, its source is singers and instrumentalists seated in a semi-circle around a priest at Our Lady of Perpetual Help church.

“My childhood dream of seeing the Pope will finally come true,” said Bassam Alya, one of the 87 volunteers from various Ainkawa churches who will sing for Pope Francis in Erbil on March 7. “It’s a symbol of peace.”

Leading the group is Father Nashwan Cosa from Shaqlawa, a town home to a tight-knit Chaldean community, and flocked to every summer by Erbil residents wanting to escape the sweltering city heat.

While the rest of the world rolls out coronavirus vaccines, Iraq, he said, is looking for an antidote to the instability and violence that continues to threaten the country : a peace vaccine, flown in from the Vatican.

“It is a big challenge for us, to prepare… but he will come, and he will bring with him peace for this land. Everyone is looking for the corona vaccine, but we are looking for a peace vaccine,” he told Rudaw English. From the room next door, Cosa can be heard guiding the choir as they prepare songs in Italian, Arabic, and Syriac, a variety of Aramaic.

Sixty percent of his congregation, he said, are Christians displaced from towns and villages across the Nineveh Plains, where the Islamic State (ISIS) terrorised and plundered some of Iraq’s most ancient communities.

The pope’s historic visit comes amid tumult in Iraq, including but not limited to the killing of protesters in the country’s south, an ongoing economic crisis, and rocket attacks on foreign military targets suspected to have been conducted by Iran-backed militias.

Young Iraqis on social media appeal to the pontiff to see the reality of life in their country: “Come to the hospitals, maybe that way they will be cleaned.”

For Cosa, it is a chance for the youth, a core component of the country’s protest movement, to show the rest of the world their potential.

“We will show all the world what we are, what we have, the ability of the youth…we have a lot of things in this land,” he said.

Like all Iraqis, Christians in the Nineveh Plains are feeling the pinch of the shrinking economy and nationwide lockdowns, leaving the Church to try and pick up the pieces. 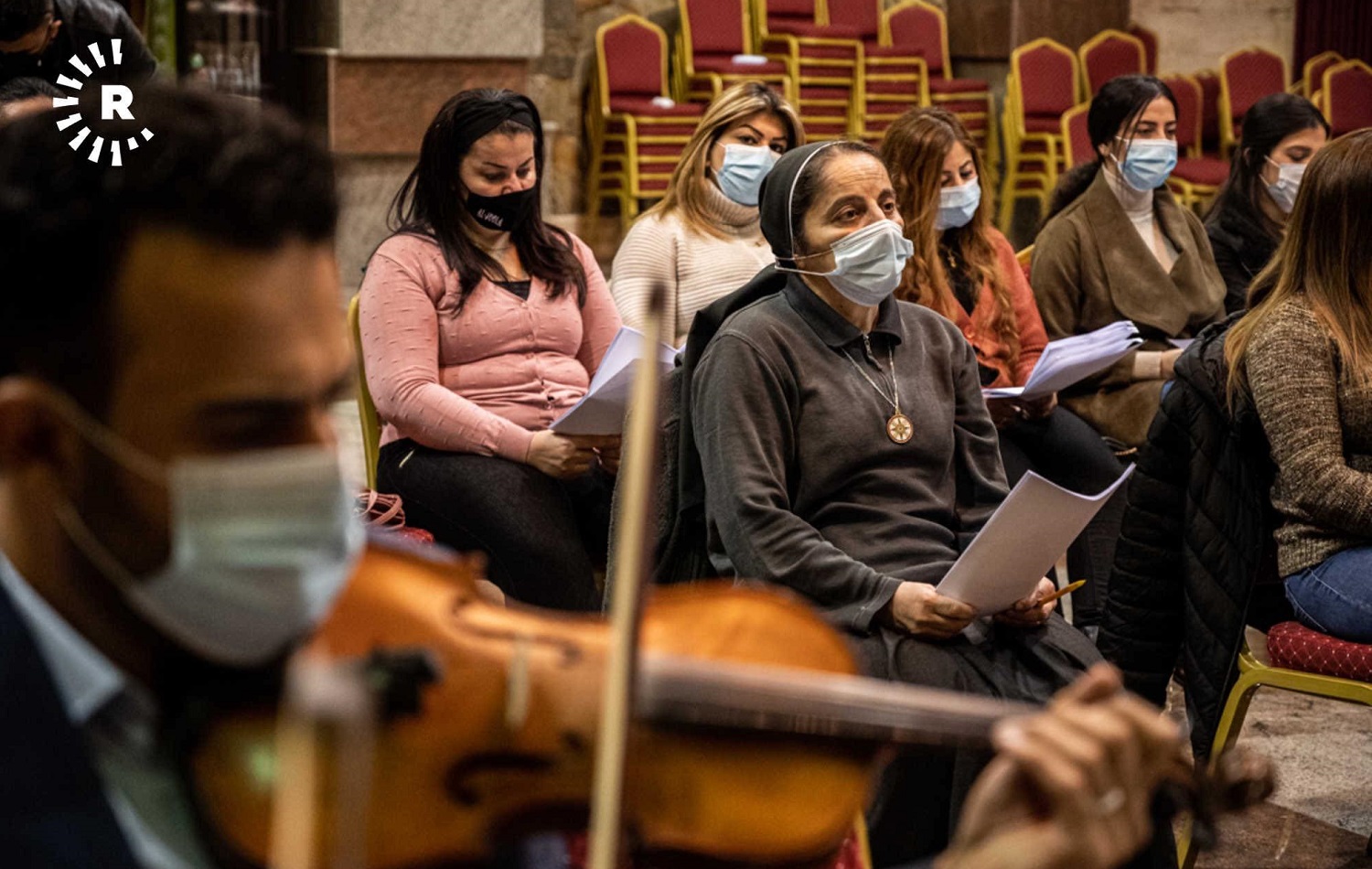 Singers rehearse at Ainkawa’s Our Lady of Perpetual Help (Umm al-Mauna) on February 25 ahead of a performance for Pope Francis. Photo: Bilind T.Abdullah / Rudaw

Also at the Ainkawa church is Father Karam Shamasha, who hails from the village of Tel Skof just north of Mosul. The priest was a student at the Saint Peter the Rock seminary in Baghdad, where insurgent violence forced Shamasha and the seminary north in 2006, to Erbil. Upon his arrival in the Kurdistan Region capital, he shared a caravan with 30 fellow students while studying for the priesthood.

Nine years later, he fled once again as ISIS militants seized his village, where he had served as the priest of St George’s Chaldean Church since 2011. He has since returned to lead a shrunken congregation.

The church has become a vital lifeline for residents caught in the quagmire of rebuilding and restarting their lives in land contested by the governments of the Kurdistan Region and Iraq, which has left a complex network of various military forces scattered across the plains.

“We’re in the middle. We always have to move when there is fighting, but thanks to God now everything is ok, there is no problem, but we don’t know if it will continue like this. We hope this visit will encourage the authorities to think about the people in the middle,” Shamasha said.

Elsewhere in Erbil, Christians sheltering in unfinished buildings have told Rudaw of their desire to leave the country, as they are unwilling to return home to what they are unsafe villages with little prosperity.

“A family leaves usually every week, every month. We have a lot of families that are waiting for a country to accept them, they are waiting five, six years with no hope, because everything is closed,” Shamasha said.

But he also holds hope that the upcoming papal visit may change things for the better.

“His presence is very important for Christians. It gives us the power to continue, to defend ourselves…all we want is to live in peace.”

“We are fighting to show our people there is a future. We have to wait, we have to pray.”

At  the Catholic University of Erbil, people shuffle from room to room, armed with national IDs at the ready. They aim to see the pope, who will hold mass at the city’s Franso Hariri stadium, named after an Assyrian politician murdered in 2001.

Classrooms are lined with volunteers from local Syriac and Chaldean churches registering the details of hopeful attendees. A computer screen shows the origin of registrees, with several from as far south as Basra hoping to witness the once-in-a-lifetime event.

At the registration, talk is not of the rocket attack on Erbil the night before, but of preparations to welcome the holiest man in Catholicism. “I feel so excited,” said volunteer Elisa Sher. “So many people didn’t believe it, because you know, Iraq is a famous country of terror and war. So when he said he would come no matter what, I was happy.” 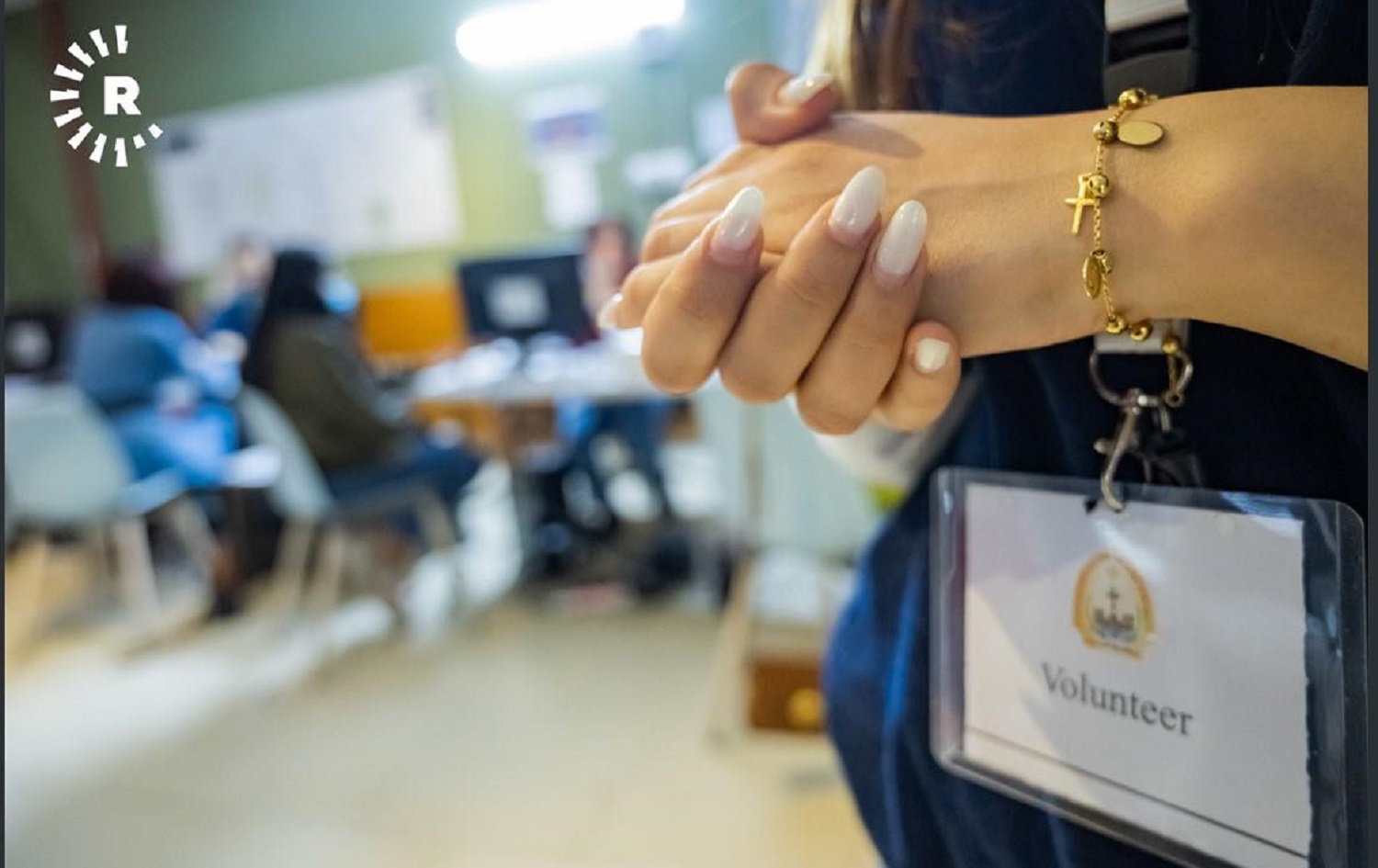 A volunteer wears a bracelet adorned with crosses while waiting at a registration for Pope Francis’ holy mass, on February 16, 2021. Photo: Bilind T Abdullah / Rudaw

North of the university is the monastery of the Dominican Order, which once had its centre in the city of Mosul. It’s priest is a Frenchman, Father Olivier Poquillon, who first came to Iraq in 2003, where he taught at the University of Mosul. More than a decade later, he would return to the city, this time to help rebuild, taking a key role in the reconstruction of the city’s Our Lady of the Hour church,- destroyed by ISIS, with UNESCO.

“In my mind, Mosul was totally destroyed. I was happy to see a roof,” he said of the Dominican Order’s Mosul monastery which was relocated to Qaraqosh, and then to Ainkawa. Next to us are bookshelves salvaged from the Qaraqosh and Mosul, now polished but once burned by ISIS. Behind, a portrait of Pope Francis, who he will introduce to UN workers in Mosul in just days to come.

“There has been a strong desire to come for years,” he said of the Pope’s visit. “He is reminding us we share a common origin, and a shared responsibility. This is very Francis,” said Poquillon, who joined the Dominicans in the 1990s.

Like Cosa, Poquillon believes the visit is an important message to the Iraqi people, particularly in Mosul, where the pontiff will visit the devastated Old City and pray for victims of war.

“Go to Mosul? Who goes to Mosul? It means something. People in Mosul are realising they have value. They aren’t nothing.”

Mosul was once home to a thriving mix of communities – Christians, Jews, Shabaks and more. “Mosul’s prosperity was in its diversity,” said Poquillon. “There were no specific neighbourhoods where the doors closed at night. Different communities lived together.”

Although ISIS may have displaced nearly all of Mosul’s Christians, the slow work of rebuilding the city’s holy sites is mending ties, and reforging trust – a bond the Pope will reflect on in his visit to the country. Christians work alongside Muslims, Kurds and Arabs to rebuild the church bells, once “part of the city’s landscape, and part the city’s pride,” as Poquillon said.

“By rebuilding the stones, we are rebuilding trust. And with the trust, you can begin to rebuild something else.”