NINEVEH PROVINCE, Iraq — Al-Tahira Church in the Nineveh Plains is readying itself for a visitor, in preparations that are far from normal. In its courtyard, workers aren’t sweeping up fine dust, but lifting and sweeping up bits of homes and churches destroyed during the brutal reign of the Islamic State (ISIS).

The visitor is none other than Pope Francis, who will be making the first-ever papal visit to Iraq. Christians, like other religious minorities in Iraq, were subject to exceptional brutality at the hands of ISIS; many of those who survived seeking refuge abroad. But news of the pope’s visit seems to have lifted the spirits of many of the country’s Christians.

Since the pope announced his visit, coronavirus has shown a resurgence, a deadly double suicide bombing has rocked Baghdad, and rockets have been fired at military bases and their surroundings across the country. But Pope Francis has insisted that he will travel to Iraq.“The Iraqi people are waiting for us; they awaited Saint John Paul II, who was not permitted to go,” he said on Wednesday. “One cannot disappoint a people for the second time.”

Like so much of the Nineveh Plains town of Qaraqosh, al-Tahira Church had been brought to ruin. But locals have renovated the once-torched, partially-destroyed place of worship, and it looks as good as new. 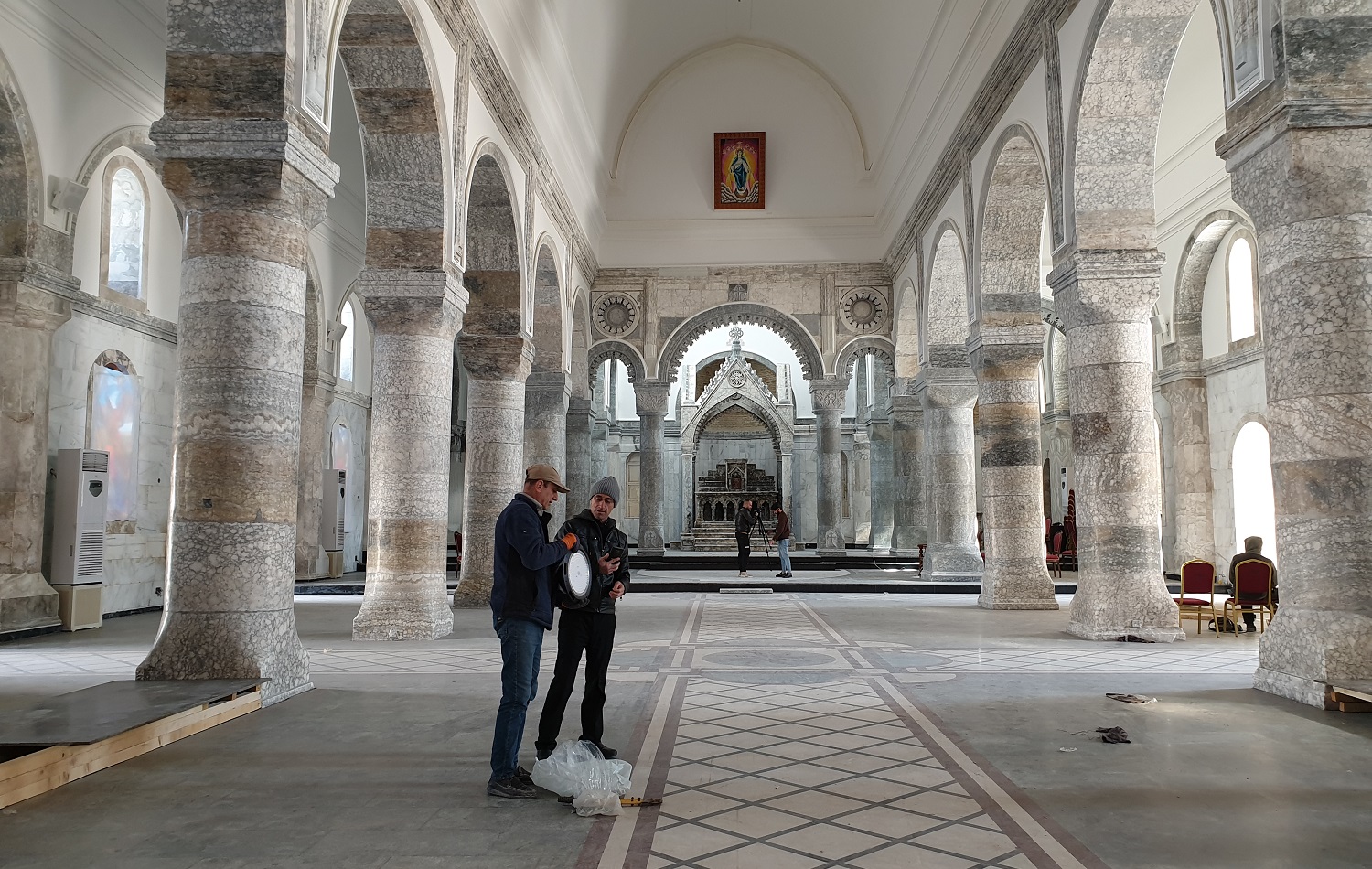 The restored al-Tahira Church in Qaraqosh is prepared on February 25, 2021for the pope’s upcoming visit. Photo: Khazan Jangiz / Rudaw

Overseeing the Syriac-Catholic church’s restoration and its preparation for the pope’s visit is Father Ammar Yako, dressed all in black, hair greying at the temples. He sees the pope’s visit as one of solidarity.

Father Yako has seen the Pope before – in Rome, in the flesh. The pontiff “is a very simple man.” he said. “He is very, very kind.”

As you enter Qaraqosh, also known by its Christian name of Bakhdida, the flags of the Vatican are at full staff, side by side with the Iraqi flag. Posters of the pope have been plastered to the city’s poles, walls and cars by around 200 locals.

At the church’s entrance, the local community works busily all over the building. People are planting flowers, fixing up a small garden to the right of the church gate of entry, scraping fences and crosses of rust, painting those fences and crosses, and hammering on the roof. Inside, everyone was busy at work, a person holding a bolt-cutter here, two fixing up lights for the roof there, a few more cutting and adjusting wooden planks on the floor. Father Ammar ran around the complex, working, supervising others, but kind enough to spare us an hour of his time.

Qaraqosh, an Assyrian city in Nineveh province, northwestern Iraq, was overrun by the Islamic State in August 2014, forcing thousands of Christians to flee to the Kurdistan Region or somewhere further away. Many have not, and do not plan on, returning.

Father Ammar, a native of Qaraqosh, was living in the nearby town of Bartella at the time. He fled to the Kurdistan Region, and worked to bring families without cars to the Region too. When he returned to Qaraqosh following its liberation in October 2016, “It was,” he said with a sigh,  “something that is so sad to see, the church in this situation, burnt, black, all the statues and the crosses were broken… there wasn’t anyone here of course, only the military. Seeing the city without its people was so sad.”

With the support of two international Christian organizations – Aid to the Church in Need, and The Knights of Columbus – work to rebuild the 90-year-old church started at the end of 2019. Since the announcement of the papal visit, reconstruction has picked up pace, Father Ammar and the local community working day and night to see it through. 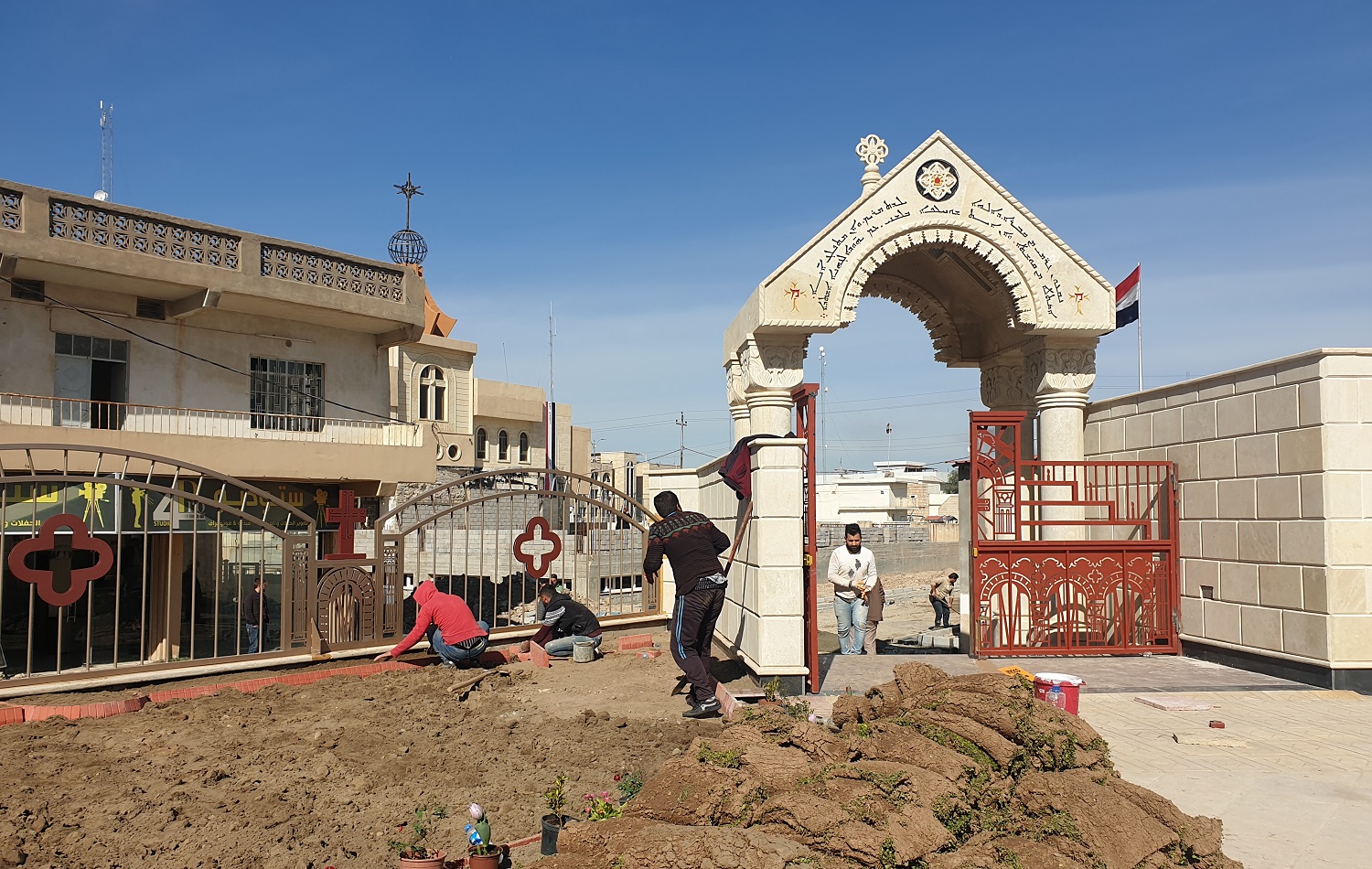 Al-Tahira Church in Qaraqosh is readied for the pope’s arrival on February 25, 2021. Photo: Khazan Jangiz / Rudaw

In Mosul’s Old City, another Tahira is being rebuilt.

Built in 1862, Mosul’s al-Tahira church, one of the oldest and largest churches in the Old City, was destroyed by airstrikes during the war with ISIS. During the city’s occupation, the extremists used the church as a court.

Four churches in the area lie in ruins; local Christian authorities, who had to select one, chose for al-Tahira Church to be rebuilt.

UNESCO started rebuilding the church in June 2020, as part of the “Revive the Spirit of Mosul” initiative that is seeing places of worship in the Old City destroyed during the war with ISIS being brought back to life.

What remains of the church is being used to rebuild it. Its engraved, heavy stones, over a century old, are handled with care by the workers.

The marks of war on al-Tahira are visible, its roof hanging off of its sides. From the vantage point of what is left of the church rooftop, it is clear that much of the surrounding area of the church still lies in ruins.

Around 3,000 tons of rubble and 10 IEDs were removed from this site, among other, gruesome discoveries.

“There was also a dead body of an ISIS person right there,” said Anas Zeyad, a local contract engineer on the site, pointing to where the first-row pew used to be.

The marks of war on al-Tahira are visible, its roof hanging off its sides. From what is left of the church rooftop, it is clear to see that much of the surrounding area still lies in ruins. 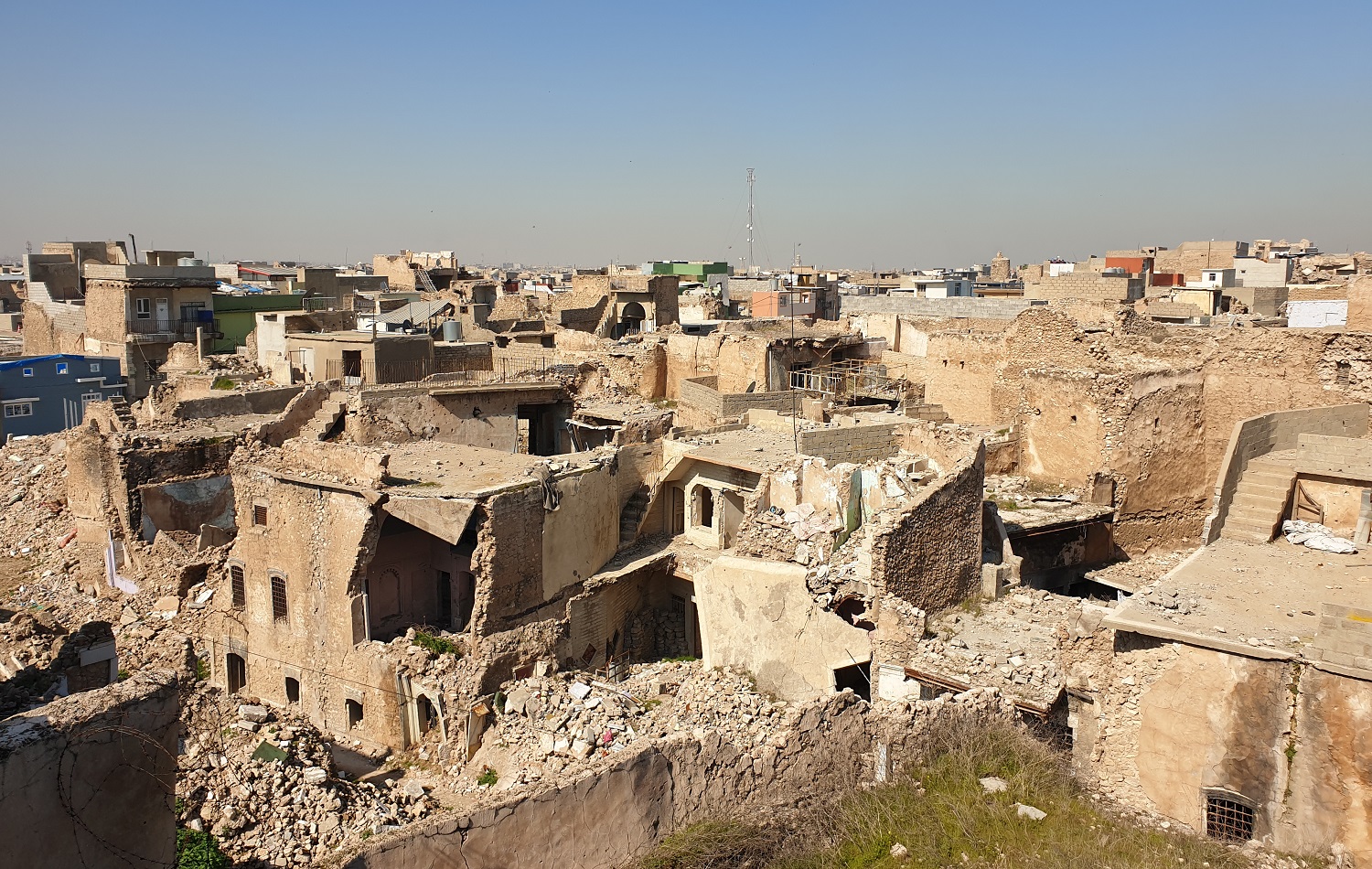 A rooftop view from al-Tahira Church, West Mosul on February 24, 2021, with the houses and buildings of the Old City destroyed during the ISIS war in sight. Photo: Khazan Jangiz / Rudaw

As in Qaraqosh, the Pope’s upcoming visit is being met with excitement by local Christians.

“We believe peace will fall upon Mosul especially, and Iraq overall, and we will of course see good results from this visit,” he added.

According to Father Raid, only a few hundred of what was once a community of thousands of Christians remain in the city

Right next to al-Tahira is the Armenian church, one of the four local churches put up for reconstruction. A message is written on one of its exterior walls: “No entry under the orders of the Islamic State.”

During the rule of ISIS, the Armenian church was used as a prison for Iraqi police officers. It garnered such a reputation among locals that they would come to know it as “The Heavy Prison”.

“No entry under the orders of the Islamic State” written on a wall of the Armenian church in West Mosul on February 24, 2021. Photo: Khazan Jangiz / Rudaw

The pope’s visit comes as Christian communities struggle to survive in Iraq.

“Even the pope, he said several times that it is very important to save Christianity in Iraq,” Father Ammar said.

That involves not just the restoration of the country’s churches, but preserving what is left of the Christian population.

According to data collected by Father Ammar and others, there are about 23,000 Christians living in Qaraqosh now – around half the number that used to live in the town.

“When there are more services, job opportunities, compensations, these things will make it easier for the Christians to come back. Not only for the Christians, but for the Muslims as well, because thousands of Muslims are outside of Mosul,” said Father Raaid.

According to data provided to Rudaw English on March 3 by Bashaar Warda, the archbishop of Erbil’s Chaldean Catholic Church, there were more than one million Christians in Iraq before 2003, of which less than 300,000 remain.

Most of the Christians that left went to Jordan, Lebanon, the United States, Europe and Australia after ISIS, Father Ammar said.

I asked him why he chose to settle down in Qaraqosh. “Something personal”, he said, his smile fading. “I want to be with the people that are suffering here, of course.”