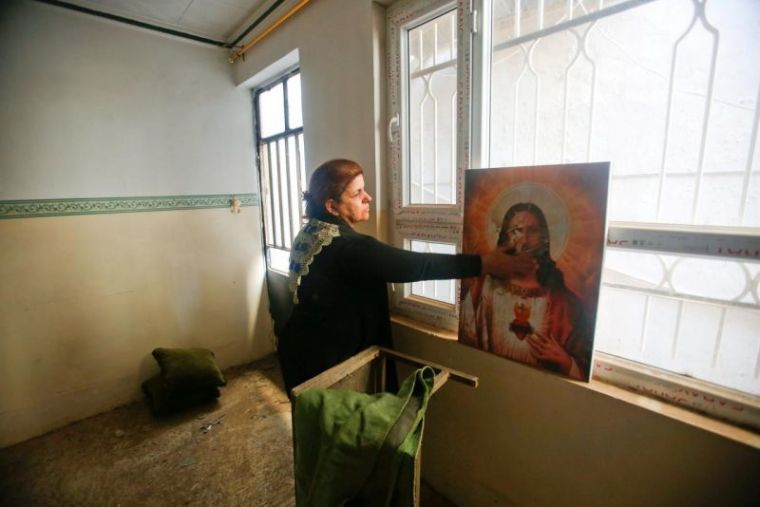 By Anugrah Kumar, Christian Post Contributor FOLLOW| Sunday, December 27, 2020
Facebook Twitter Email Print MenuComment
A Christian woman inspects a home in the town of Bartella east of Mosul, Iraq, after it was liberated from Islamic State militants November 23, 2016. | Reuters/Khalid al Mousily
A church in Iraq’s capital of Baghdad that witnessed the massacre of dozens of worshipers by al-Qaida gunmen in 2010 celebrated Christmas in their place of worship for the first time in 10 years, with their faith still intact.

“I couldn’t feel the spirit of Christmas again,” Nawras Sabah William, a member of the Lady of Salvation church who was 18 at the time of the massacre, told The Sunday Times.

“No one thinks they’re going to go to church and never come home,” he added, as he, along with other members of the community, gathered at the church, amid security guards and police officers, to celebrate Christmas and commemorate the 10th anniversary of the massacre.

Iraq’s Christian community has witnessed years of conflict and targeted attacks, forcing many to flee. From 1.4 million three decades ago, its population has come down to an estimated less than 400,000.

In 2017, an Iraqi Christian lawmaker, Josef Sleve, told Anadolu Agency that as many as 1.5 million Christians, or close to 75% of all followers of Christ in Iraq, had fled the country since

Days before Christmas, the Muslim-majority country’s parliament announced that Christmas will now be an annual national holiday.

At St. Joseph’s Cathedral in Baghdad on Christmas Eve, Iraq’s Sunni Muslim President Barham Salih said the government “must make serious efforts to enable Iraqi Christians to return and to live a secure and dignified life in their homeland,” according to Crux Now.

In Iraq, the president is only the nominal head of the state while the prime minister is the head of the government.

“Their religious and cultural rights must be protected. As the country’s history shows, they are a major and important part of Iraq’s people,” Salih added.

He acknowledged Iraq’s diversity, saying that without Christians, “the strength given us by our diversity of religions and ethnicities, would surely be lost.”

“Over recent years, Iraq’s Christians have suffered because of extremism and terrorism here. This has seen the country lose their human capital as they have been forced to leave their homes, or have been murdered or displaced, by primitive and backward groups,” he said.

Pope Francis recently announced he would visit Iraq for the first time in early March. He is scheduled to visit Baghdad, the southern city of Ur and the Christian heartland of Nineveh province.

The announcement has sprung hope in Karemlash, a predominantly Christian town on the Nineveh Plains about 18 miles southeast of Mosul and which was once held by the Islamic State terror group.

“We hope this visit can prevent demographic change, preserve the identity of our region, and prompt the government to seriously start rebuilding our areas,” St. Adday’s priest, Fr. Thabet al-Mekko, said, according to AFP. “We’ve started the countdown. We need to feel closer to the Christian community in the rest of the world.”

Responding to the pope’s announcement, Zuhair Mansour, a 50-year-old school principal in Karemlash, said, “It could be the step in building peace in this wounded country.”

Martin Banni, the priest at the Church of the Assumption of the Virgin Mary in Baghdad, called the pope’s decision “a great, wonderful Christmas gift.”

In July, Aid to the Church in Need, an international humanitarian aid organization, published a lengthy report based on a series of surveys of Christians still living in the Nineveh Plains of Iraq.

The report estimates that unless “urgent steps” are taken by the international community, the Christian community in the region could drop to just 23,000, which would suggest that about 20% of the Christian population that lived in the region before the Islamic State invaded in 2014 would remain.