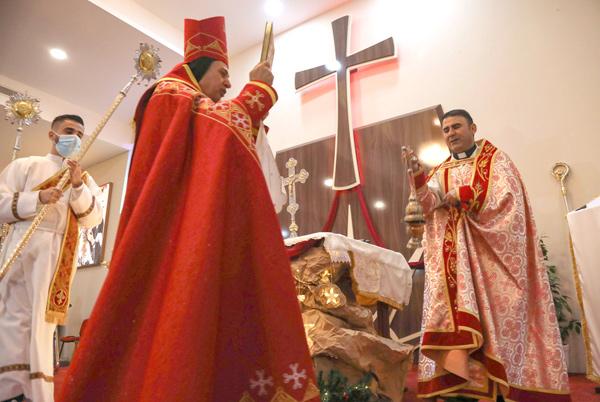 By AFP –
Iraqi priests hold the Christmas Eve mass at the Sultana Church in the Ankawa suburb north of Erbil, the capital of the autonomous Kurdish region of northern Iraq, on Thursday (AFP photo)
QARAQOSH, Iraq — It wasn’t Santa on a sleigh, but it was close: Just before dusk on Christmas Eve, a busload of volunteers pulled into the Iraqi Christian town of Qaraqosh to deliver holiday happiness.

Under a pinkish sky, they disembarked from their charter bus with cardboard boxes full of Christmas cards, bearing hand-written messages from across Muslim-majority Iraq.

“A special greeting to our Christian brothers,” read one card, signed in the overwhelmingly Muslim southern port city of Basra the previous day.

On foot, members of Iraq’s Tahawer (Dialogue) initiative and other volunteers delivered some 1,400 cards across the northern town, which was ravaged by extremist rule after the Daesh group advanced east across the Nineveh Plains in 2014.

“It’s a beautiful initiative,” said Rand Khaled, after receiving a Christmas card outside the Syriac Catholic Church of the Immaculate Conception in Qaraqosh.

She was dressed in her Christmas Eve finest, with a chic chocolate-coloured coat shielding her from the cold.

“We need initiatives like this every once in a while, because people who don’t know these areas absolutely should get to know them,” Khaled told AFP.

Iraq’s Christians number around 400,000 today, down from some 1.5 million before the US-led invasion toppled president Saddam Hussein in 2003.

It is a tiny minority in a country of 40 million people, most of whom are Shiite Muslims.

The cards came from all over Iraq: From the capital Baghdad and the Shiite shrine city of Najaf, from mainly Sunni Arab Salahaddin province in the west and the Kurdish city of Dohuk in the far north.

They were packed into dozens of boxes and transported up to 950 kilometres through military checkpoints before reaching Qaraqosh.

“I don’t know how to describe it,” said Nishwan Mohammad, Tahawer’s programme manager.

“People were ecstatic — they never expected someone to come visit them, much less bring them letters from all over Iraq,” he told AFP.

In addition to the handwritten messages, each card bore a special hand-drawn symbol of the province from which it was sent.

Those from Basra — signed by sheikhs, university students and even fishmongers — featured the port city’s emblematic new bridge across the Shatt Al Arab waterway with Santa and his reindeer flying overhead.

Those from Baghdad showed part of the capital’s much loved Tahrir (Freedom) Monument.

And the cards from Salahaddin bore an image of the spiralled Great Mosque of Samarra, which was designed to look like the ancient Mesopotamian ziggurat — but also roughly resembles a Christmas tree.

Pharmacists, tailors, a linen shop owner and a cellphone salesman were among the signatories there.

Since the terrorists from the Daesh group were pushed out of Qaraqosh in 2016, the town has slowly started to rebuild thanks to funding by international organisations and its residents’ own savings.

It sees few visitors, however, which is why the Christmas Eve delivery was so special.

“After the war that took place in this province, there was a kind of estrangement among the different communities,” said Imad Al Sayer, an activist from the nearby city of Mosul who helped distribute the cards.

“We’re taking the initiative. God willing, these letters will be constructive messages that bring positive changes to the communities of this province.”