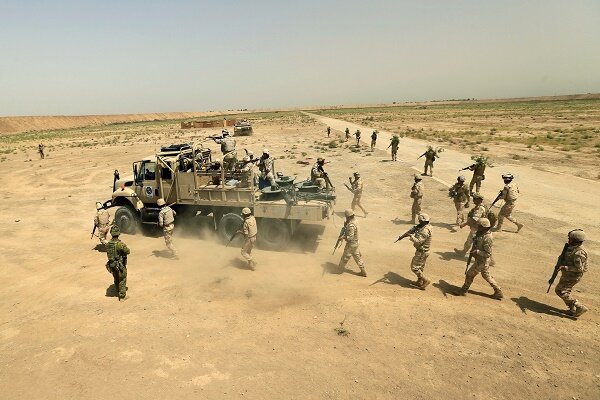 TEHRAN, Dec. 20 (MNA) – Iraqi army and Popular Mobilization Units, also known as Hashd al-Sha’abi carried out a large-scale security operation against terrorist elements in the western province of Nineveh, on the Syrian border.
Hashd al-Sha’abi forces carried out a large-scale security operation in western Nineveh, specifically in Al-Hadar, against the remaining elements of the ISIL terrorist forces.

According to the report, the operation extends to the border with Syria. The commanders of the Hashd al-Sha’abi forces announced that on the first day of the operation, a number of terrorist hideouts in the west of Al-Hadar were identified and destroyed.

ISIL takfiri terrorists attacked military bases on the eastern axis of Diyala to take control of a number of Iraqi army security bases in this province, Al-Masalah reported.

According to the report, ISIL takfiri terrorists’ attempt to seize military and security headquarters was met with a timely reaction by the Iraqi army. After the timely presence of Iraqi forces, ISIL forces fled east of Diyala.

In late 2017, Iraq declared victory over Daesh, but the armed forces still conduct operations against militants and sleeper cells that are active in different parts of the country.

In recent months, Hashd al-Sha’abi forces and the Iraqi Army have carried out a series of operations against ISIL members in Al Anbar, Nineveh, Saladin governorates since the middle of last month.