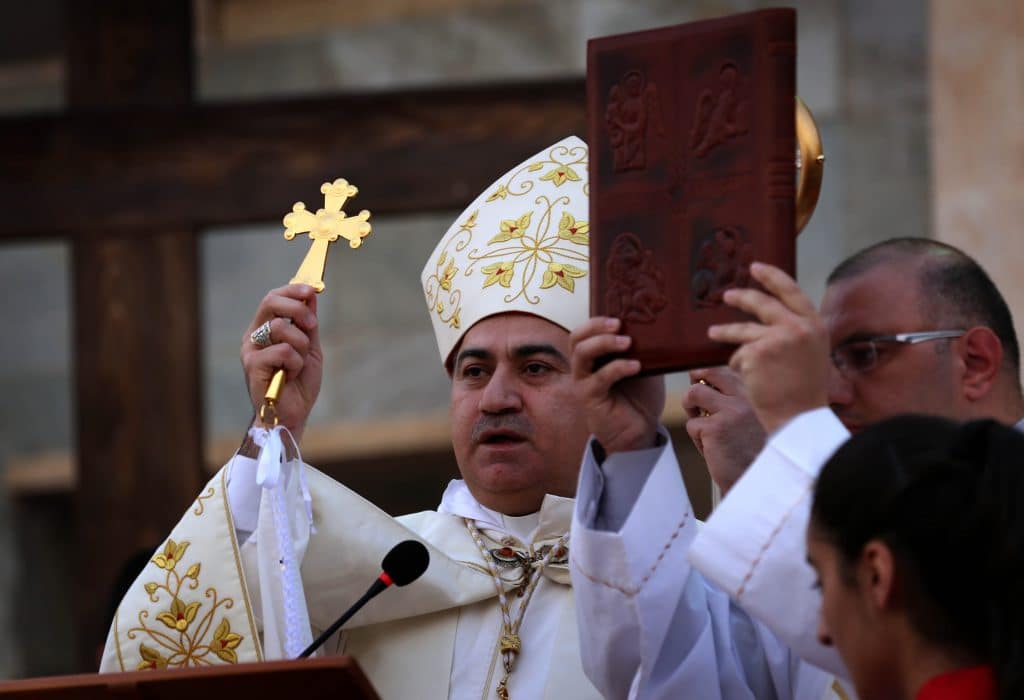 John Cookson
Editor’s note: Slated to appear in our January issue dedicated to Christian persecution, this interview-essay is adapted from John Cookson’s upcoming book, The Kurds: my friends in the north, coming in March from Conrad Press.

And all that will live godly in Christ Jesus, shall suffer persecution. — 2 Timothy 3:12
There was an armed guard on the front and rear gates at St Joseph’s Church in the Ankawa district of Erbil. “Mostly for show,” assured the Archbishop’s aide with a smile as I stepped in. Security was tight for a reason.

Six years before, the jihadists of the so-called Islamic State had much of western Iraq in their grip, including the Kurdish region. More than 125,000 Christians, mainly Chaldean, had been brutally displaced from their homelands. 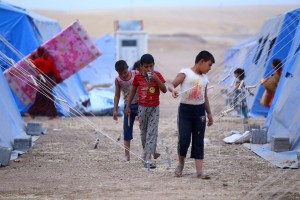 June 12/13, 2014: Christian refugees near Erbil in Iraq. (CNS)
Countless thousands had been killed when they’d refused to renounce their faith.

Many families were left without shelter and refuge, work or their homes. Churches and monasteries had been blown up, leaving them with nothing that gave Christian life dignity: family visits, celebration of weddings and births, the sharing of sorrows.

“In Iraq,” he said, “there is no redress for those who have lost properties, homes and businesses. Tens of thousands of Christians have nothing to show for their lives’ work, in places where their families have lived, maybe, for thousands of years.”

He paused to gather his thoughts.

“One of the oldest churches, if not the oldest church in the world – the Christian one – is  perilously close to extinction in Iraq,” he said with a catch in his voice, “and those of us who remain must be ready to face martyrdom.”

Even in late 2020, when the so-called caliphate had been destroyed, several Islamic State cells still roamed former Christian enclaves. Nowhere is truly safe. “Islamic State are the personification of the devil and are our tormentors,” Archbishop Warda said. “I.S. confiscated our present, while seeking to wipe out our history and destroy our future.”

Archbishop Warda is as much at home ministering to his flock in Erbil as hobnobbing with a President in the Oval Office or taking tea with Britain’s Prince Charles in London—the heir to the British throne has always taken a concerned interest in the plight of Christians in the Middle East. 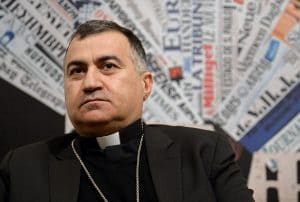 “A bit of a bruiser” – Chaldean Archbishop of Erbil (Iraqi Kurdistan), Archbishop Bashar Warda gives a press conference on January 30, 2017 in Rome. (Photo credit: FILIPPO MONTEFORTE/AFP via Getty Images)
My initial impression was: this man of the cloth looks like a bit of a bruiser—he’s exactly the type of guy I’d want on my side in a fight.

He takes a keen interest in local and international politics and is perfectly relaxed with journalists.

It seemed a reasonable point in our conversation to ask whether the persecution of Christians in Iraq and Syria had been a challenge to his faith.

Speaking with passion, Archbishop Warda responded: “It’s a catastrophe. But you know, the persecution of we Christians has strengthened our faith, it’s given me, personally, more courage to fight on.”

“Christianity,” he explained, “is a faith of forgiveness.”

So, could he pardon the jihadists who’d beheaded and committed countless other atrocities against Christian families?

Without a moment’s hesitation he said: “What kind of Christian would I be if I didn’t forgive?” 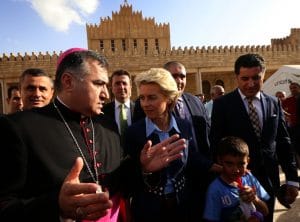 Iraqi Archbishop Bashar Warda (L), the Chaldean Archbishop of Erbil, chats with German Defence Minister Ursula von der Leyen (C) during the latter’s visit to Iraqi Christians who fled the violence in the northern province of Nineveh, on September 25, 2014 at the Saint Joseph church in Erbil. (Photo credit: SAFIN HAMED/AFP via Getty Images)
“We forgive those who murdered us, who tortured us, who raped us, who sought to destroy everything about us. We forgive them. In the name of Christ, we forgive them.”

When the Archbishop and I met, Baghdad and other big cities like Najaf and Basrah were rocked by ongoing street protests against corruption and mismanagement by the government. Hundreds of, mainly young, Iraqis had died in the violence.

Similar protests flared again in late 2020, sparked by similar grievances, although the demonstrators’ violence and government crackdown had been less brutal.

Archbishop Warda remarked on the circumstances and the agitation, saying: “Instead of bringing hope and prosperity, the current government structure has brought continued corruption and despair, especially to the youth of Iraq.”

“Our young people have made it clear they want Iraq to be independent of foreign interference,” he said, “and to be a place where all can live together as equal citizens in a country of legitimate pluralism and respect for all.”

At stake is whether Iraq will finally emerge from the trauma of Saddam Hussein and the past sixteen years, to become a legitimate, independent and functioning country, or whether it will become a permanently lawless region, open to proxy wars between other countries and movements, and a servant to the sectarian demands of those outside Iraq.

“If protests lead to a new government with a new constitution not based in Sharia, but instead based upon the fundamental concepts of freedom for all…then a time of hope can still exist for the long-suffering Iraqi people,” he said.

When the Pope had to postpone his planned visit to Iraq in 2020 over security concerns, a Vatican spokesman sent a message to Iraq’s Christians. The Pope said: “I say to you, citizens of Iraq, I am very close to you. Your country is a battlefield with wars on each side.”

Archbishop Warda reacted with joy, just as soon as the new date of the Pope’s visit was publicised: “I thank the Pope for his courageous decision to visit Iraq in March 2021,” He tweeted. “It has always been his mission to go to the margins and the marginalised. His important flock here is not forgotten. The Pope will come spreading the gospel of peace, goodwill and reconciliation for all in Iraq.”