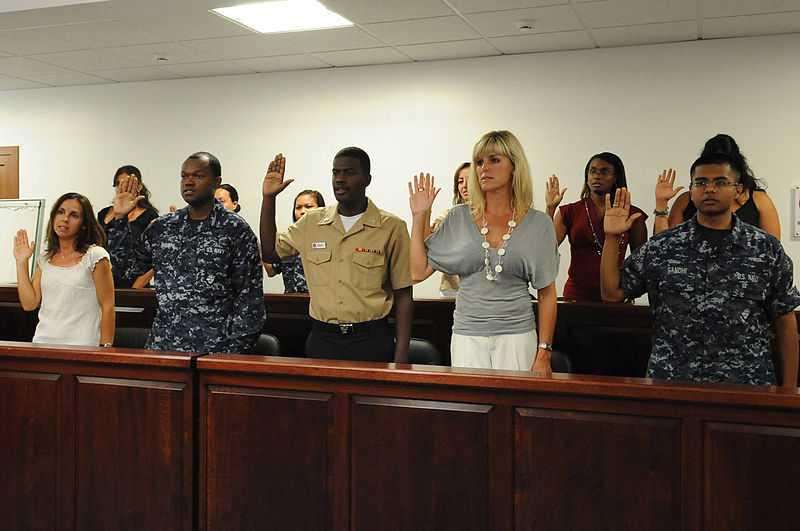 
The lead plaintiff in a class-action lawsuit that sought the release of 1,400 detained Iraqi Americans was sworn in as a United States citizen Friday after winning his immigration case.

Usama “Sam” Hamama of West Bloomfield Township, the lead plaintiff in Hamama v. Adducci, said his family sought this conclusion when the case began more than three years ago. On Saturday, he said he finally felt liberated.

“I honestly told my wife ‘something’s gone.’ I just feel like my mind, back, shoulders, you feel free,” Hamama told The News. “Where I came from, I didn’t have rights and when I came here, I didn’t respect the rights, and now I finally feel like I have a responsibility for my own. I thank God, I really do.”

The case, filed by the American Civil Liberties Union of Michigan, sought an end to the detention of some 1,400 Iraqis nationally, including 114 initially from Metro Detroit, who had been swept up in Immigration and Customs Enforcement raids for deportation in June 2017.

Due to the pandemic, Hamam’s citizenship ceremony was delayed, and he said he couldn’t wait to take the pledge of allegiance.

“Having the backing of the ACLU, many other people and my family is what kept me going,” Hamama said. “I honestly just wish I could have voted in this election.”

In January, an immigration judge dismissed the deportation case, saying Hamama had rehabilitated himself since a former assault charge, which was erased by a pardon granted by Gov. Rick Snyder in one of his last acts before leaving office in December 2018.

Over the last three years, The Detroit News has covered the Iraqi deportations, with Hamama at the forefront.

Hamama, 58, came to the United States at age 11 and hasn’t lived in Iraq for more than 40 years. He had 1988 convictions for felony assault, felony firearm and carrying a pistol in a motor vehicle.

Hamama flashed an unloaded gun at another driver during a road confrontation and served two years in prison. At the time of the incident, the crime was not an offense that could trigger deporation. Later, the government issued an order to remove him but did not try to send him back.

He was arrested again along with 1,400 others in the raids on June 11, 2017, following President Donald Trump’s executive order barring admission to the United States of nationals from seven countries, then including Iraq. For years, the men had been allowed to stay in the United States because Iraq wouldn’t accept them, and it remains unclear if they will now. — More:Fearing deportation, Iraqi refugees cut tethers

Hamama had been detained for eight months in St. Clair County by ICE officials until posting a $100,000 bond in February 2018. He returned to his job as a grocery store manager and with his wife and four children kept fighting his case while he was detained, he said.

His wife, Nahrain Hamama, joined families during rallies outside of the McNamara Federal Building in 2017 in the emotional battle to keep their family members close.

“Her smile was as big as mine,” he said, as they walked out of the Detroit Immigration Field Office. “She had the weight lifted off her too. Uncertainty was so hard on the family. We’ve been waiting and waiting and nothing is like the day it actually happens. We feel like we got our wish to be together.”

Like the Hamama’s, the ACLU of Michigan is celebrating knowing that more than one Iraqi-American family will be able to have Thanksgiving dinner together.

“What Sam’s case really shows us is that due process matters,” said ACLU attorney Miriam Aukerman. “This fight started more than three years ago when the Trump administration rounded up him and hundreds of others, attempted to board them on a plane without their day in court, and they could have been killed there.”

He said he’s excited to see his daughter attend Central Michigan University, where she will pursue a career in the medical field.

“It’s a blessing, and to think which road would she have to take if I wasn’t here to support her. … It’s ironic but you look and see other families being deported and you can’t do much for them as much as a father does for his family,” he said. “I’m blessed and honored to be in this country.”

Few Iraqi nationals remain in detention and Aukerman hopes that will continue.

“I can’t tell you how much it means to me, as someone who works on this case,” she said. “It speaks to the critical importance of due process and making sure people have a chance to tell their stories. It shows the real damage the policies that have been in place have been tearing families apart, not just at the border but at the heart of our communities.”

The lawsuit was brought to give detainees time to challenge their immigration cases individually and make new arguments about their safety if deported to Iraq. The ACLU had argued that if the detainees were repatriated, they would face torture or death for their Christian faith and some for having served in the U.S. military.

Jimmy Aldaoud, 41, of Shelby Township, who came to the U.S. as a 6-month-old from a refugee camp in Greece, was deported to Iraq in summer 2019 after being sentenced on drug possession charges. Aldaoud, who family said was a bipolar schizophrenic and diabetic, was found dead due to lack of insulin a month later, the ACLU said. — More: Refugee who died after being deported to Iraq laid to rest in Michigan

Fearing the same fate, other detainees with final orders of removal began cutting their electronic tethers in an act of protest.

In 2018 and 2019, U.S. District Judge Mark Goldsmith made a series of decisions in favor of the immigrants, who were then released from custody to individually fight deportation orders. Those rulings were overturned by an appeals court on Jan. 6, with the jurists saying Goldsmith had exceeded his authority in granting the releases.

Democratic U.S. Rep. Andy Levin of Bloomfield Township and Republican Rep. John Moolenaar of Midland also spearheaded a bill — calling for relief from deportations until individual hearings could be held — and was backed by 30 lawmakers across the country.

Martin Manna, president of the Chaldean American Chamber of Commerce and Chaldean Community Foundation, said the outcome is better than they pictured years ago.

“There’s no more deserving American than Sam and he’s demonstrated that for the past few decades,” Manna said. “We’re so happy he was able to become a citizen and hopefully, the next administration will consider the challenges Iraqi nationals face and find a different path to provide citizenship.”