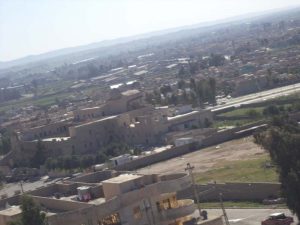 By John Pontifex AN oxygen machine is to be despatched to COVID-hit northern Iraq after a leading Catholic charity agreed to fund the project. Aid to the Church in Need (ACN) approved the ‚ā¨55,000 (¬£49,360) oxygen generator system, which will be installed in Maryamana Catholic Hospital, in Erbil, the capital of semi-autonomous Kurdistan.

Iraq is witnessing a surge in COVID, with confirmed cases passing 500,000 this week.

In his letter asking the charity to fund the oxygen machine, Chaldean Catholic Archbishop Bashar Warda of Erbil said: ‚ÄúI ask ACN to cover the cost [of the project] as we are very badly affected by COVID.‚ÄĚ

He added: ‚ÄúThe community and IDPs [internally displaced people] of all faiths look to the Archdiocese to help them. We need a constant supply as oxygen is the most vital tool against the virus.‚ÄĚ

The archbishop stressed that free COVID care was essential in Erbil, which is home to many refugees and displaced people, and the Nineveh Plains, where unemployment was up to 70 percent.

Local reports describe an upsurge in cases in Erbil and Qaraqosh, and Archbishop Warda highlighted concerns especially about the virus spreading within Christian communities.

He added that, rather than coming to Maryamana to receive the oxygen, nurses and doctors would use refillable bottles to treat people at home.

The diocese expects to treat 70 COVID patients a week.

The oxygen generator will be sent to Erbil from Turkey and will take a week to install. The objective is to have it up and running before Christmas.

ACN has already provided medical equipment for the Maryamana hospital, which was opened in 2016.

Iraq is a priority country for ACN which increased its help, providing emergency and pastoral aid, after the 2014 Daesh (ISIS) invasion of Nineveh and Mosul, which sparked a humanitarian crisis.

The situation remains delicate with security challenges continuing four years on from the military defeat of the militants.

¬†Founded in 1947 by Fr Werenfried van Straaten, whom Pope St John Paul II named ‚ÄúAn outstanding Apostle of Charity‚ÄĚ, the organisation is now at work in 140 countries throughout the world.

Undertaking thousands of projects every year, the charity provides emergency support for people experiencing persecution, transport for clergy and lay Church workers, Child‚Äôs Bibles, media and evangelisation projects, churches, Mass stipends and other support for priests and nuns and training for seminarians.

¬†Aid to the Church in Need UK is a registered charity in England and Wales (1097984) and Scotland (SC040748). ACN‚Äôs UK office is in Sutton, Surrey and there is a Scottish office in Motherwell, near Glasgow and another office based in Lancaster that covers the North-West.

¬†Please always acknowledge Aid to the Church in Need as the source when using our material.

Aid to the Church in Need sends out its press releases to members of media organisations, and individuals who have specifically requested to be on our list. If you no longer wish to receive our press releases please email fionn.shiner@acnuk.org@acnuk.org¬†with the word ‚ÄúRemove‚ÄĚ in the subject box. ACN‚Äôs Privacy Policy can be found at¬†www.acnuk.org/privacy.

The initiative is titled ‚ÄėLet's build bridges of peace and…

Mosul¬†is the latest movie from Joe and Anthony Russo's AGBO…