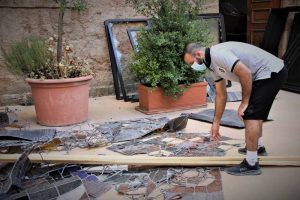 By Fionn Shiner ONE HUNDRED days after the explosion in Beirut on 4th August, a leading Catholic charity has revealed details of its aid programme which will enable church bells to ring again across the Lebanese capital.

Aid to the Church in Need (ACN) announced that its €5million (£4.53m) aid package will be spent mainly on reconstruction, with churches, a cathedral and a convent among the buildings being repaired.

The explosion was triggered by 750 tons of ammonium nitrate, creating one of the largest non-nuclear explosions ever recorded, causing more than 200 deaths, 6,500 injuries and leaving 300,000 people homeless.

Among the seven projects confirmed by ACN – with a further 19 being considered – is St Saviour’s Melkite Greek Catholic church which lost its roof in the explosion.

Parish priest Father Nicolas Riachy told ACN: “We want to give hope for those who still want to remain here. Our mission is to bring light into the darkness through which we are living. There is no Christianity without the Cross. Christ is our example.

“It is not easy to be Christians, but many of our people are still very much aware that this land is Holy Land and we cannot abandon it.”

Father Riachy stressed that the roof repairs were vital before the harsh winter months.

He said: “If the first of the winter rains arrive, they will spoil everything. And there is also a crack in the building which needs to be fixed, or else everything else will come down.

“All the houses of our faithful have had their windows smashed and doors blown in. And on top of this we have the economic crisis. The banks have frozen people’s assets, so now they have nothing. How are they going to help me rebuild this church?

“Pope Francis has told us that a Middle East without Christians is unthinkable. If Christians are to remain in this country, we need each and every one of you. Let’s hope that this church can continue to be a beautiful testimony to the word of the Lord.”

He added: “Around 10 percent of the population of this particular suburb have left, because they can no longer live in their homes.

“I can’t do anything to stop them because I can’t offer them the security, which is what they are seeking.”