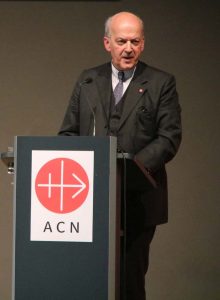 By John Newton THE international head of a leading Catholic charity for persecuted Christians has expressed horror at the killing of three people just before the start of Mass in France – and called on world leaders to condemn the attack.

In a statement made last night (Thursday, 29th October), Dr Thomas Heine-Geldern, international executive president of Aid to the Church in Need (ACN) wrote: “ACN is deeply shocked by the horrific attack which took place this morning in the Basilica of Notre-Dame of the Assumption in Nice, France, causing the death of three people, including the beheading of a woman.

“ACN denounces this outburst of violence, yet another terrorist act in France, and one more on the long list of crimes against Christians in the world.”

The assailant, Brahim Aouissaoui, was a 21-year-old Tunisian man who arrived in France shortly before the attack.

Dr Heine-Geldern added: “Our thoughts and prayers are with the victims, the injured, their families and the entire French Catholic community.

“At the same time, we call on all political and religious leaders in the world to firmly and explicitly condemn this radical Islamist attack.

“As the French bishops have written, these people have been attacked because they were in the church and because they ‘represented a symbol’ to be destroyed.”

Dr Heine-Geldern went on to say: “We feel that these days Christians in Europe are caught between a radical and visceral attack on two fronts: one which wants to destroy their roots and to create a purely individualistic society without God.

“And another which has been radicalised and wants to impose a fundamentalist Islamist system by force, sowing terror and violence as we have seen in Nice, abusing the name of religion and God.”

ACN’s international executive president also called for respect for religious belief and decried the ridicule of the symbols of faith of any confession.

Two people died in the church during the attack. A 60-year-old woman’s neck was almost completely severed and the basilica’s 55-year-old sacristan was also killed.

Outside, a woman of 44 was stabbed, succumbing to her injuries shortly afterwards.