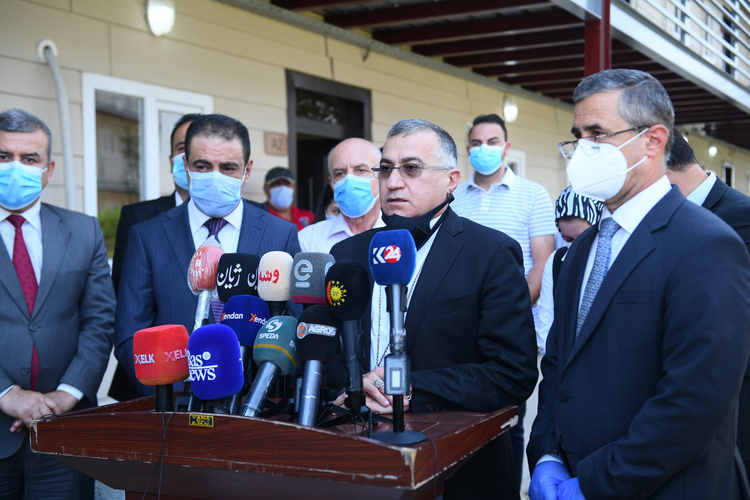 Kevin Clarke Archbishop Bashar Warda speaks at the opening of a new recovery center originally built by L’Œuvre d’Orient, France, and prepared for Covid-19 patients by the Chaldean Archdiocese of Erbil. (Photo by Stivan Shany, courtesy of the Archdiocese of Erbil)
As nations around the world grapple with the coronavirus pandemic’s second wave, many will struggle to build capacity to care for the sick and provide for the vulnerable. That effort will be especially challenging in places like northern Iraq. The pandemic response in Iraqi-Kurdistan and Nineveh is complicated by political tension and dysfunction and a still-smoldering ISIS insurgency. And civic and donor resources have already been significantly strained by the cost and effort of reconstruction and relocation after years of conflict.

Though the Christian communities around Erbil, like much of Iraq, were largely spared by the first wave of the pandemic in the spring, the numbers of Covid-19 cases and deaths rose dramatically over the summer. After steadying in recent weeks, they appear on the cusp of another significant acceleration.

In Erbil, “we now have about 2,000 families affected by Covid,” said Archbishop Bashar Warda, the spiritual (and these days frequently material) leader of the Chalden Church in Erbil. He reports that 23 members of Erbil’s Christian community have been lost to Covid-19 since March.

Archbishop Warda said that sourcing affordable and reliable supplies of effective medicines and oxygen tanks to distribute among Covid-19 victims has become a major preoccupation.

The death toll throughout Iraqi-Kurdistan is of course much higher, approaching 2,100 out of more than 57,000 cases. Nationwide, more than 413,000 have been infected and 10,000 have perished so far.

The archbishop, who responded to questions from America about Erbil’s pandemic response by email, said that sourcing affordable and reliable supplies of effective medicines and oxygen tanks to distribute among Covid-19 victims has become a major preoccupation.

The Archdiocese of Erbil, he said, has agreed to assist the regional government in its efforts to respond to the coronavirus. According to an archdiocesan spokesperson, while the recently opened Maryamana Hospital in the largely Christian Ankawa neighborhood is being used to coordinate treatment of Covid-19 patients in the community, none of the Covid-19 cases have so far been brought into the new facility as a precautionary measure to protect current patients. The archdiocese’s role had been pivotal in the building of the new hospital. It is perhaps the best equipped in Erbil, but it is small, with about 70 beds and seven I.C.U. units.

Most coronavirus victims are being treated in their own homes by visiting medical teams dispatched from Maryamana. Other patients are being diverted to a temporary facility the archdiocese helped establish to treat active and recovering Covid-19 victims exclusively.

A spokesperson for the archdiocese reports that as the case numbers increase, “a considerable amount of time is spent trying to find oxygen, and the demand exceeds supply.” He said parish priests “visit hospitals in search of oxygen, and there is little guarantee that a supply will be found.”

Many of the Covid-19 patients are indigent and rely completely on the archdiocese for medicine and oxygen supplies. “To go to a private hospital will cost $2,000 per day, and that is without medicines,” Archbishop Warda said, an impossible sum for many of the refugee families and other dislocated people who are largely unemployed and have been for months.

Many of the Covid-19 patients are indigent and rely completely on the archdiocese for medicine and oxygen supplies. “To go to a private hospital will cost $2,000 per day, and that is without medicines.”

Archbishop Warda detailed conditions in Erbil that sound close to crisis level. “The public hospitals are not highly thought of nor trusted,” he said. “They also lack oxygen supplies and the beds are full. In order to get a bed you now have to apply for a waiting ticket until someone vacates the bed, either in death or being cured. Therefore there is no real choice, so we handle most of our cases, and some of those for Muslims, in the homes with medicines and oxygen, both of which are in short supply.”

Describing the expensive and time-consuming logistics of maintaining a reliable supply of oxygen for deployment to scores of patients across Erbil, Archbishop Warda said, “A huge and life-saving boost would be if we could afford an oxygen machine to fully fill the bottles at the Maryamana instead of sending them to the factory,” he said. “The machine would cost $60,000. This would be put into our hospital and would save many lives.”

The pandemic of course has also created acute economic dislocation in a community ill-prepared to accept one more burden. Unemployment was already high before the pandemic led to even more job losses. The archdiocese has undertaken efforts to keep food on the table for scores of families across Ankawa.

With churches closed and breadwinners out of work, donations and collections within the diocese are down 32 percent, Archbishop Warda said. He worries that overseas Christian agencies that have assisted the archdiocese and its reconstruction efforts in Nineveh Province will soon face their own financial challenges related to the pandemic and may be forced to reduce support.

Still, the archbishop remains determined to encourage the remnant community of Christians hanging on in northern Iraq. Their numbers had been falling for years before the disorder engendered by the 2003 U.S. invasion of Iraq. The ISIS rampage across Nineveh in 2014 drove the Christian population in northern Iraq to historic lows.

Can Christianity in northern Iraq survive after ISIS?
Kevin Clarke
“Education is vital to bring hope to the Christians,” he said. The archdiocese is financially supporting over 60 percent of the tuition—about $2,500 per student—at the Catholic University in Erbil. “Overseas agencies are now sponsoring 26 C.U.E. students,” he said. “We are searching for more sponsors all of the time.” The archdiocese also supports 300 students at other Catholic schools.

A key challenge throughout the pandemic, and one that will continue beyond it, remains “livelihood programs,” said Archbishop Warda—that is, finding or creating work and new businesses for the Christian families who remain. In some communities in northern Iraq and in the Christian villages of the Nineveh Plains, unemployment may reach as high as 70 percent, he said.

Kurdistan has endured recession and deep political uncertainty for many years. The lockdown related to the pandemic has only been an additional, if substantial, blow to an economy that had already been reeling. In northern Iraq the majority of jobs are provided by the government, Archbishop Warda said. Now only two out of six of those government salaries are being paid.

A key challenge throughout the pandemic, and one that will continue beyond it, remains “livelihood programs,” said Archbishop Warda—that is, finding or creating work and new businesses for the Christian families who remain.

“We have to find support to help the families during this difficult time,” Archbishop Warda said. “The pandemic has only exacerbated the issues and challenges for my church. We have to look after the community, as there is no government help…. We have to rely on our own initiatives and resources.”

Archbishop Warda implored international bodies to keep up their assistance to the region “to help to get us back on our feet.”

Though the task ahead seems daunting, Archbishop Warda is confident that his team can respond to the challenge. The archdiocese has had to learn the hard way how to deal with tremendous logistical challenges. He noted that the Rev. Shwan Kakona, who is helping coordinate the pandemic response now, “was in charge of the rental and food program during the ISIS crisis when we had 75,000 [internally dislocated people] and refugees to deal with.”

“His experience during that time,” Archbishop Warda said, “is proving invaluable to what we are trying to do for the community.”