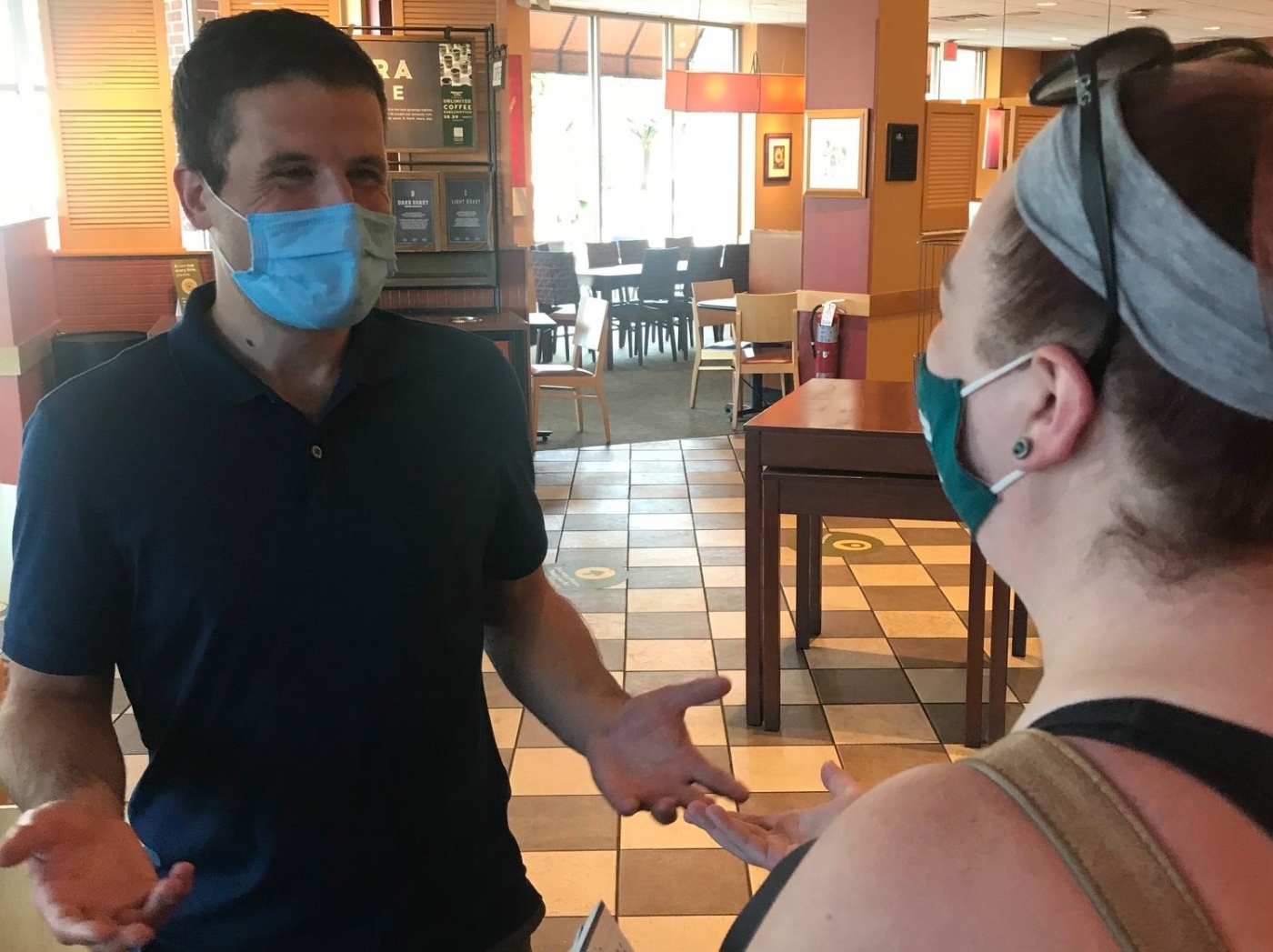 Eric Esshaki, a Republican running for Congress in Michigan, says his Iraqi-Christian heritage taught him about hard work, family and faith, and “the value of the American dream”.

The 36-year-old lawyer, who worked as a registered nurse in his early 20s, is backed by US President Donald Trump to unseat Democratic Congresswoman Haley Stevens.

US presidential election explained in five questions
Read More »
If elected, he would become the first Iraqi-Christian Chaldean to serve in Congress. Michigan is home to a large community of Chaldeans – Iraqi Catholics who are mostly politically conservative.

In a phone interview with Middle East Eye, Esshaki paid tribute to his Iraqi immigrant father.

“My dad came here because he wanted to partake in the American dream,” Esshaki told MEE. “He knew that if he worked hard and made sacrifices, it wouldn’t be easy but that he could create a better life for himself and his family, and he passed those general sentiments on to me.”

Despite the rampant anti-immigrant rhetoric in his Republican party, the candidate invoked his father to assert conservative values. “He knew that the American dream wasn’t a handout from the government. It was about having the opportunities, and if you’re willing to seize those opportunities and work hard, you can do what you want to do in this country.”

Policy priorities
Esshaki said his policy priorities in Congress would be dealing with the coronavirus crisis, addressing issues in the health care system and reviving the economy.

“We need to focus on those issues and the policies at the national level, and they certainly have a very strong impact on the folks here in the district and throughout Michigan,” he said.

Esshaki called for a common-sense approach, decrying the politicisation of America’s problems rather than focusing on solutions.

Stevens, his opponent, was elected in 2018 as part of the “blue wave” that saw Democrats take back the House of Representatives amid intense organising efforts and anger at Trump’s policies.

– Eric Esshaki, Republican candidate for Congress
Still, the district, which encompasses western Detroit suburbs, is a relatively conservative one. In 2016, Trump won it by about five percentage points. And then-Republican incumbent Congressman David Trott retained his seat by almost 50,000 votes.

Stevens has tried to present herself as a pragmatic moderate to accommodate the political realities, though she faced Republican outrage for voting in favour of impeaching Trump over allegations of abusing his power to pressure Ukraine to investigate Biden’s son.

Esshaki portrays the congresswoman as a left-wing Democrat who merely perpetuates her party’s rhetoric.

“You get things done by having adult conversations about what’s going to work and putting forth solutions and having a dialogue about those solutions,” he said. “We’re not seeing that from her. Quite frankly, we’re not seeing it from our government at the federal, state or local levels.”

Immigration
In many ways, Michigan’s 11th District represents the coveted suburban vote that has been decisive in recent presidential elections, though America’s once predominantly white suburbs are becoming more diverse.

For example, immigrants constitute more than 15 percent of the population in the 11th district, with tens of thousands of voters of South Asian and Middle Eastern descent, many of whom are Muslim.

If elected, Esshaki would have to represent these communities which have been openly chastised by the president he embraces.

Esshaki rejected bigotry against Muslims, saying that everyone needs to be treated with “dignity and respect”.

‘I am against a Muslim ban, against a ban on anybody based on their religious views’

– Eric Esshaki
“The first thing that we need is a strong leadership that understands the issues and is willing to speak up when there is that sort of divisive rhetoric,” he told MEE.

“We need to understand that people are different and we benefit by people being different. But at the end of the day, we all share the same common goals.

“We want a strong economy. We want our children to do well. And we want to leave our country and our communities in a better state than we received them for our children.”

The Republican candidate, however, objected to labelling Trump’s executive order that banned travel from several Muslim-majority countries as a “Muslim ban”, saying that the decree was a “national security” measure aimed at countries that were not secure.

Asked about Trump’s 2015 call for “a total and complete shutdown of Muslims entering the United States”, the Republican candidate said he was not familiar with that statement.

“But certainly I am against a Muslim ban, against a ban on anybody based on their religious views,” Esshaki told MEE. “That’s fundamentally contrary to our country, our Constitution and the principles that we believe in as humans.”

‘Death sentence’
Michigan’s Chaldean community has seen first-hand the effects of Trump’s immigration policies. After the US administration worked out a deal with Baghdad that saw Iraq accept deportees from the United States, immigration authorities rounded up dozens of Chaldeans who had for years been leading normal lives in Michigan despite outstanding deportation orders.

During the deportation campaign, community advocates argued that sending Christians back to Iraq would amount to a “death sentence”. Iraq’s Chaldean population has been dwindling because of a systematic campaign by the Islamic State (IS) group and other militants targeting the country’s religious minorities since the 2003 US-led invasion.

Jimmy Aldaoud’s death confirms worst fears about Trump’s deportations
Read More »
Many were deported, including 41-year-old Jimmy Aldaoud, who died from lack of access to his diabetes medication after arriving in Iraq last year. Aldaoud had lived in the United States since he was six months old.

“I’ve been on record multiple times saying that we should not have gone in and deported these folks or attempted to,” Esshaki told MEE. “I spoke with President Trump a couple of weeks ago about this issue. He reassured me that his team is working on it, that the Chaldean folks here are here to stay.”

The Chaldean community had favoured Trump in 2016. Early this year, the president vowed to keep Michigan’s “wonderful” Iraqi Christians in the country, but most of those targeted for deportation are still in drawn-out court battles to secure their stay in the United States.

On Israel-Palestine
Esshaki’s campaign website does not address foreign policy in the Middle East. Earlier this month, Esshaki welcomed the endorsement of the staunchly pro-Israel Republican Jewish Coalition, which had welcomed the Israeli government’s plan to annex parts of the West Bank in clear violation of international law.

Asked about the issue, Esshaki avoided discussing the details of the conflict, saying that if he had all the answers to solve it, he would be running for a different position entirely – though he did laud US-Israeli ties.

“The United States needs to support Israel. Israel stands for human rights in the Middle East. They stand for a democratic form of government,” Esshaki said. “I think that it’s in our economic interest to support Israel. We have a lot of joint ventures. We work with them, especially in areas like technology.”

‘Out-vote the hate’: Tlaib and Omar call for large Muslim turnout
Read More »
While Israel portrays itself as “the only democracy in the Middle East”, critics and human rights advocates accuse it of committing major abuses and war crimes against Palestinians.

UN experts said in June that annexation would cement “an already unjust reality: two peoples living in the same space, ruled by the same state, but with profoundly unequal rights”.

“This is a vision of a 21st century apartheid,” they wrote.

Stevens has also been an uncritical pro-Israel voice in Congress during her first term, drawing criticism from Michigan’s Arab community.

Esshaki told MEE that all sides in the conflict should “come together and work together for a solution without having the United States or any other outside powers dictating what that ought to be”.