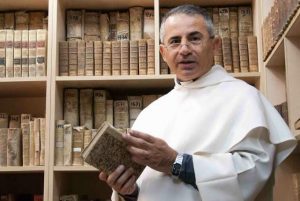 By John Newton with Maria Lozano A BISHOP in Iraq has been nominated for the Sakharov Prize for Freedom of Thought for saving more than 800 historic manuscripts from destruction by the terrorist group Daesh (ISIS).

Archbishop Najeeb Michaeel of Mosul, who is one of three finalists on the shortlist for the award, oversaw the evacuation of Christians to Iraqi Kurdistan – and safeguarded manuscripts dating from the 13th to the 19th century – after Daesh took Mosul in June 2014.

The Chaldean Archbishop, who showed the collection of historic documents to an ACN project team visiting Iraq in 2017, described the importance of preserving the Church’s heritage.

He said: “Just before ISIS came and occupied our land, our monastery, I felt something will happen very dangerous against us.

“That’s why I decided to put all these collections in the big truck and take them out of the Nineveh Valley and Mosul and put them here in Erbil, Kurdistan.

“It’s very important to us to save our heritage and keep it safe for future generations.

“We have many grammars and many dictionaries dating from the 12th to 13th century, in Aramaic especially, the language of Jesus Christ – it’s our mother tongue – and we are proud to keep them.”

The Sakharov Prize for Freedom of Thought, which is awarded by the European Parliament annually, was set up in 1988 to honour individuals and organisations that defend human rights and fundamental freedoms.

It is named in honour of the Soviet physicist and political dissident Andrei Sakharov.

Award nominees in previous years include Chaldean Patriarch Louis Raphael I Sako and Asia Bibi, the Christian who was on death row in Pakistan before she was acquitted and started a new life with her family in Canada.

The winner will be announced on 22nd October.