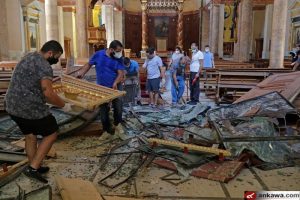 By John Pontifex MEMBERS of an ancient Chivalric Order with close ties to the Middle East have raised more than £10,000 for the people of Beirut suffering following the catastrophic explosion.

The Military and Hospitaller Order of St Lazarus of Jerusalem responded to an urgent appeal for help from Catholic charity Aid to the Church in Need (ACN), which is providing emergency support for nearly 6,000 families worst affected by the blast on 4th August.

An initial grant of £5,000 was made by the St Lazarus Charitable Trust of the Grand Priory of England and Wales, and further donations were made by members of the Order.

The Order’s commander of Wales, Chevalier Dr David Woolf, said the donations reflected members’ concern to help the people of Beirut, which is the Lebanon base of the group’s spiritual protector, Melkite Greek Catholic Patriarch Joseph Absi.

Dr Woolf said: “We immediately saw the need to act and to act quickly in support of those suffering in Beirut.”

ACN is providing emergency help – food, shelter and pastoral support – amid reports that 300,000 families were displaced by the explosion, the brunt of which was particularly felt in Beirut’s Christian districts.

Thanking members for their speedy and generous response to his calls to support the ACN appeal, Dr Woolf said: “We were motivated by the need to show Christian compassion in response to a terrible situation.

“The people of Beirut went from one moment, where everything was completely normal, to the next, where there was complete catastrophe – all of it projected onto our screens around the world.”

Last October, the Order in Wales held a fund-raising dinner hosted by the Cardiff Oratory in Formation, collecting £5,000 for ACN’s work for Christians fleeing persecution in Syria, the second such event in support of the Catholic charity. 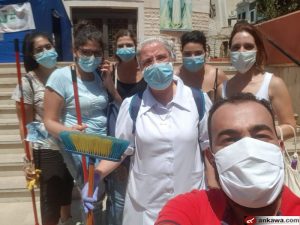