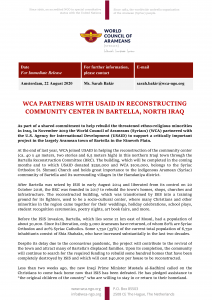 Dear sir/madam,
In Nov. 2019, the World Council of Arameans (Syriacs) joined the United States Agency for International Development (USAID) in supporting the reconstruction of a community center in the largely Aramean (Syriac) town of Bartella in the Nineveh Plain, North Iraq. Due to COVID19, this critically important project experienced a delay, but it is expected to be completed in the next months.

After Bartella was seized by ISIS in early August 2014 and liberated from its control on 20 October 2016, the Bartella Reconstruction Committee was founded in 2017 to rebuild the town’s homes, shops, churches and infrastructure. The reconstructed building, which was transformed by ISIS into a training ground for its fighters, used to be a socio-cultural center, where many Christians and other minorities in the region came together for their weddings, holiday celebrations, school plays, student recognition ceremonies, poetry nights, art book fairs, and more. 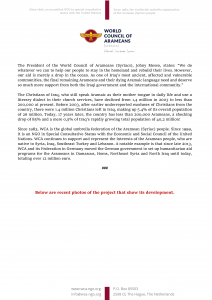 Less than two weeks ago, the new Iraqi Prime Minister Mustafa al-Kadhimi called on the Christians to come back home now that ISIS has been defeated. He has pledged assistance to “the original children of the country” who are willing to stay in or return to their homeland.

For the rest of our press release, which you are free to republish and share with interested people in your network, please see attached or https://www.wca-ngo.org/wca-news/press-releases/632-wca-partners-with-usaid-in-reconstructing-community-center-in-bartella,-north-iraq .

– Since 1983, the world federation of the Aramean (Syriac) people
– Since 1999, the only Aramaic NGO in Special Consultative Status with the United Nations