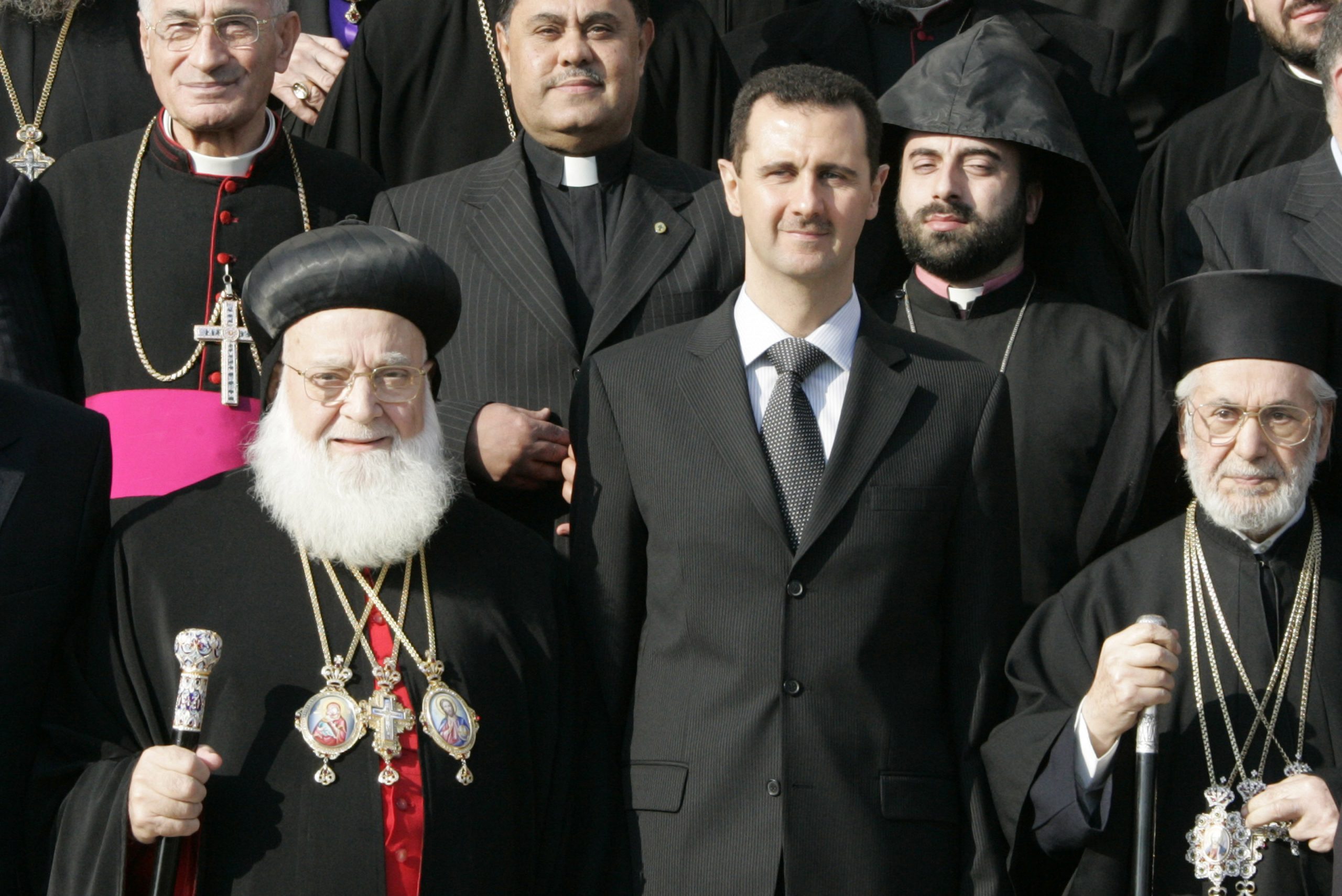 by Ayman Abdel Nour Politics & Diplomacy Syria
Syriac Orthodox Patriarch of Antioch and All the East and Supreme Head of the Universal Syriac Orthodox Church Ignatius Zakka I Iwas (L) stands next to Syria’s President Bashar al-Assad (C) along with others clerics in Damascus in this December 25, 2007 file photo. Iwas died in Germany at the age of 80 on March 21, 2014, Syrian state media said. REUTERS/Khaled al-Hariri
As expected, on August 11, Syrian President Bashar al-Assad ordered that Hammuda al-Sabbagh remain in his position as speaker of parliament. This raises the question as to why he was selected again after serving in this position since 2017 and, more importantly, why he was appointed in the first place?

The speaker of parliament, like other government positions, is often not based on experience or qualification. And simply because Assad knows individuals in top positions does not mean they will have the ability to impact regime policies. All important decisions are made based on orders coming from the top. Thus, all that is left in the hands of the appointed official is routine procedures and administrative work. These appointments are mostly used by the regime to send a message to domestic and international audiences.

When the 2011 Syrian revolution erupted, Muhammad Naji al-Otari of Aleppo was the prime minister and Mahmoud al-Abrash of Damascus was the speaker of parliament. This pairing of politicians from Damascus and Aleppo was rather common since Syria’s independence in 1946 and up until Hafez al-Assad’s reign in 1971. Hafez introduced a new concept in which he assigned top governmental positions to candidates based on their cities, religious and ethnic sects, and his level of satisfaction with said groups in order to gain their support—particularly during crises.

There are very clear examples of this. After the Lebanese Civil War erupted in 1975 and Syrian forces subsequently entered Lebanon, the regime hired Maronite Christian Kamal Youssef to lead the investigation branch of the military intelligence agency. Appointing a Christian in this position furthered the regime’s goals in several ways. Firstly, rebellious Maronites in Lebanon could be more easily controlled by “one of their own,” as it allowed Assad to take away their ability to charge his regime with sectarianism. Instead, he could be viewed as the protector of minorities. Secondly, the appointment of a Christian had the complete opposite effect with regard to the Muslim population, as it further eroded the social fabric of the country by driving fear between the two sects. Finally, the appointment of Youssef also pitted Maronites against each other because he was charged with confronting the families of the Lebanese Civil War detainees and hostages in Syrian jails, who were mostly Maronites from Lebanon too. Youssef also confronted the Maronite patriarch of Lebanon Nasrallah Sfier, who sought answers about the whereabouts of the detainees and hostages, but never received adequate responses.

In 1987, the Syrian regime appointed Matanios Habib—a Maronite—as oil minister prior to intensifying the shelling on predominantly Maronite Christian neighborhoods in east Beirut in preparation for an incursion in 1990. His appointment was intended to win the support of the Syrian Maronite sect and send a message that the regime has no issue with the Maronites. After taking over east Beirut, the regime promptly had Habib leave his position at the oil ministry in 1992.

Years later, in 2000, when the Syrian role in Lebanon was criticized, Bashar al-Assad—Hafez’s son and successor—appointed another Maronite, Walid al-Buz, as a member of the Baath Party Regional Command—equivalent to a prime minister position in prestige—to act as a shield. Soon after the Syrian forces left Lebanon on April 26, 2005, Assad did not think twice before replacing him; Al-Buz was removed on June 9, 2005.

It is worth noting that there are other ethnic and religious sects that are significantly larger than the Syrian Maronite sect—whose numbers do not exceed a few thousand families—that never receive any top positions. Rather, the Assad regime—be it father or son—gave the Maronites this limited special treatment in order to portray itself as a protector of minorities and drive a wedge between the Maronites and other sects.

When Bashar al-Assad took power in 2000, he inherited Muhammad Mustafa Mero from Damascus as prime minister and Abd al-Qadir Qaddura—also from Damascus—as the speaker of parliament. Assad continued displaying strong support for Damascus because he needed the support of its businessmen and inhabitants in order to consolidate power against the old guard. He continued this for two years before installing a politician from Aleppo, Muhammad Naji al-Otari, as the new speaker of parliament. A few months later, Assad transferred Otari to the premiership position and appointed Mahmoud al-Abrash from Damascus in the former’s role.

This pairing of a prime minister and a speaker of parliament from Aleppo and Damascus continued from 2003 until April 2011 when the revolution started. At this point, Assad’s top priority was securing the capital and its surrounding areas, not Aleppo. Thus, he replaced the prime minister, who was from Aleppo, with Adel Safar from Damascus. When Safar failed to quell the uprising in rural Damascus and the situation in Deir Ezzor deteriorated, Assad appointed Riyad Farid Hijab from Deir Ezzor to the position of prime minister in June 2012 in order to quash the uprising. Hijab rejected the regime’s bombardment of his hometown and subsequently defected, leaving Syria in August 2012, only a few months after his appointment. Assad replaced him with Wael Nader al-Halqi from Daraa, using him to suppress the growing movement the latter’s home region. Assad also kept a politician from Damascus in charge of parliament with the appointment of Mohammad Jihad al-Laham in May 2012. The two top officials, prime minister and speaker of parliament, continued to work together for four years.

In 2016, Assad instituted new changes intended to send a harsh message to defector Hijab. Assad appointed Hadiya Khalaf Abbas, who is from Hijab’s province, as the first female speaker of parliament in Syria. Assad’s message was clear: not only can the regime easily replace you with someone from Deir Ezzor, but it also can find someone who is willing to adhere to the government’s will.

By doing this, Assad also made a point to the international community—he encourages the appointment of women in top positions in the Syrian government and that the Syrian regime is secular and progressive. After fifteen months, Assad dismissed Abbas from her position and appointed the Syriac Christian Hammouda al-Sabbagh from Hasakah to embarrass the autonomous administration in eastern and northern Syria and to send a message that the regime is more diverse and inclusive when it comes to religious freedom, as evidenced by the appointment of a Christian to the premiership.

Yet in the parliamentary elections on July 19, Assad did not allow Sabbagh to participate in the primary held by Baath Party members in order to ensure that he remains in his current position. Assad knew that Sabbagh was likely to lose that election, so he used the pretext that the politician is a member of the Baathist Regional Command, which controls and runs everything in Syria, and therefore cannot partake in the primary. However, to make a point to Sabbagh that he was in his position merely because Assad instated him there—as was the case with other politicians—not because of his popularity or supporters in Hasakah, Assad placed him third on the list of winners. This is despite the fact that Sabbagh could have been placed first, as was done with Ammar al-Assad, a relative of the president and others closely tied to the regime.

The Syrian regime deals with all groups and sects in the same way. It has appointed members of Arab and Alawite tribes, Armenians, and, most recently, the Ahmadiyya and Uthmaniyah sects in exchange for using their connections abroad to keep the regime afloat and to alleviate some of the sanctions imposed on it. In reality, the regime is neither a protector of minority rights nor an advocate of women’s rights—let alone a promoter of peace and reconciliation. It operates merely to preserve itself, it undermines chances of Syrians uniting across religious and ethnic lines, and gouges the government’s chances of effectiveness by manipulating positions, all while retaining the true decision-making power for itself.

Ayman Abdel Nour is a noted Syrian reformist. He is also the editor-in-chief of All4Syria (Syria’s leading independent news outlet), and the president of the non-profit Syrian Christians for Peace.

The Syrian regime wheels and deals minorities to remain in power