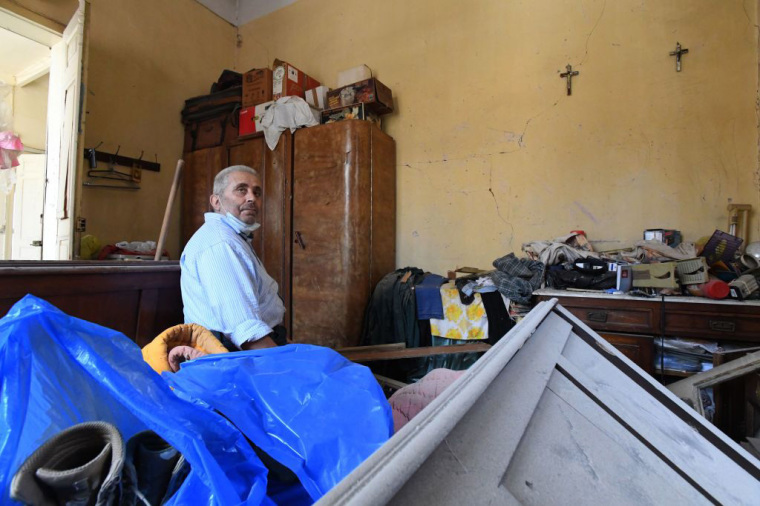 By Michael Gryboski, Christian Post Reporter A man sits inside his damaged house in the Lebanese capital Beirut on August 6, 2020, two days after a massive explosion shook the Lebanese capital. – The blast, which appeared to have been caused by a fire igniting 2,750 tonnes of ammonium nitrate left unsecured in a warehouse, was felt as far away as Cyprus, some 150 miles (240 kilometres) to the northwest. The scale of the destruction was such that the Lebanese capital resembled the scene of an earthquake, with thousands of people left homeless and thousands more cramming into overwhelmed hospitals for treatment. | AFP via Getty Images
A cardinal serving in Lebanon said churches have a duty to help Beirut, which he described as a “devastated city” after a massive explosion at its port killed at least 145 people and injured 5,000.

“Beirut is a devastated city. A catastrophe struck there because of the mysterious explosion which occurred in its port,” Cardinal Bechara Boutros Rai, Maronite Patriarch of Antioch, said Wednesday in a statement released by the Catholic Telegraph.

“The Church, which has set up a relief network throughout Lebanese territory, today finds itself faced with a new great duty which it is unable to assume on its own,” he added.

Rai called the devastation of the explosion “a war scene without war,” adding that there was “desolation in all its streets, neighborhoods, and houses.”

From sea to mountain: How a massive explosion left a trail of destruction across Beirut and beyond. https://t.co/yIQq4LcTDb pic.twitter.com/3K8DfjzmMD

“[The Church stands] in solidarity with the afflicted, the families of the victims, the wounded, and the displaced that it is ready to welcome in its institutions,” he continued.

The Maronite Church is an Eastern rite denomination that has canonical ties to the Roman Catholic Church, tracing their origins to an early church Syrian hermit named St. Maron.

On Tuesday, an explosion caused by an estimate of 2,750 tons of ammonium nitrate, used in fertilizers and bombs, that had been stockpiled for years in a port warehouse. The explosion left 460 feet wide crater at the site of the blast which is now filled with water from the sea.

The result was a massive explosion that leveled homes and smashed windows, resulting in thousands of casualties; the noise of the blast could be heard as far away as the island of Cyprus.

New footage of the explosion in Beirut pic.twitter.com/Zo4Hs25sUK

French President Emmanuel Macron toured the city Thursday, where crowds pleaded with him for help.

A Message from Edifi – Christian Podcast App
The World’s Most Powerful Christian Podcast App
Edifi is a transformational app that aggregates thousands of the best Christian podcasts in one place. Cut through the noise and grow your faith by diving into the world’s top Christian podcasts. Find entertainment and inspiration. Download the FREE app today!
As he walked the streets of the hardest-hit neighborhoods, Christians shouted: “Mr. Macron, free us from Hezbollah,” The Epoch Times reported, adding that they were referring to the Iran-backed Shi’ite Muslim terrorist organization.

Another person in the crowd told Macron “… you’re on General Gouraud Street, he freed us from the Ottomans. Free us from the current authorities.” The French president assured residents he would send medical aid to Lebanon and said he would discuss “home truths” with the government about reforms Western countries have been seeking regarding its economy and politics.

Others in the crowd chanted “Revolution” and “The people want to bring down the regime,” France 24 reported, adding that those were the same slogans chanted last year during mass protests.

The Lebanese government is investigating the cause of the Beirut explosion, having already put multiple port officials under house arrest.

“Those responsible will be held accountable whomever and wherever he is,” said Interior Minister Mohammed Fahmi at a press conference on Wednesday, NBC News reported.

The Rev. Scott Parker, who resides in Beirut and works for the Presbyterian Church (USA) Presbyterian Mission, reported on social media that they were under lockdown.

“We’ve got stay-at-home orders because of the spread of chemicals through the air,” Parker said, according to the Presbyterian News Service.

“Please pray for the vulnerable, and the hospital and rescue workers and all who are helping those in need.”

by Abigail R. EsmanA priest plays with a child after…

DECLARATION OF AUA IN AUSTRALIA IN SUPPORT OF ITS ACTIONS…

Then-Fr. Najeeb Michaeel at a "Global Dialogue" event in Buenos…

An Iraqi archbishop who helped save hundreds of ancient manuscripts…

MARD?NArcheologists in southeastern Turkey initiated an excavation to unearth mosaics…

Iraq: dozens of Christian manuscripts stolen by ISIS recovered in…

The historical artefacts were stolen from a church and hidden…

by Anadolu AgencyMARD?N TurkeyA view of one of the mosaics…

MARDIN, TURKEY—Abdulgani Tarkan of the Mardin Museum told the Anadolu…

The abuses have been directed against women and children, and…

Final Statement The Executive Committee of the Middle East Council…