Maria Lozano – ACN
Archbishop Tobji: “The restoration of the cathedral is proof that we are still in this country. Our mouths must continue to praise God in this place.”
On Monday, July 20, after many difficulties in the work of reconstruction, the Maronite Cathedral of St. Elijah, which suffered severe damage from mortar attacks during the war, will be officially re-opened and re-consecrated.

“The restoration and re-opening of the cathedral has both a symbolic and a practical meaning,” stated Maronite Archbishop Joseph Tobij of Aleppo, in an interview with the international Catholic pastoral charity and pontifical foundation Aid to the Church in Need (ACN). 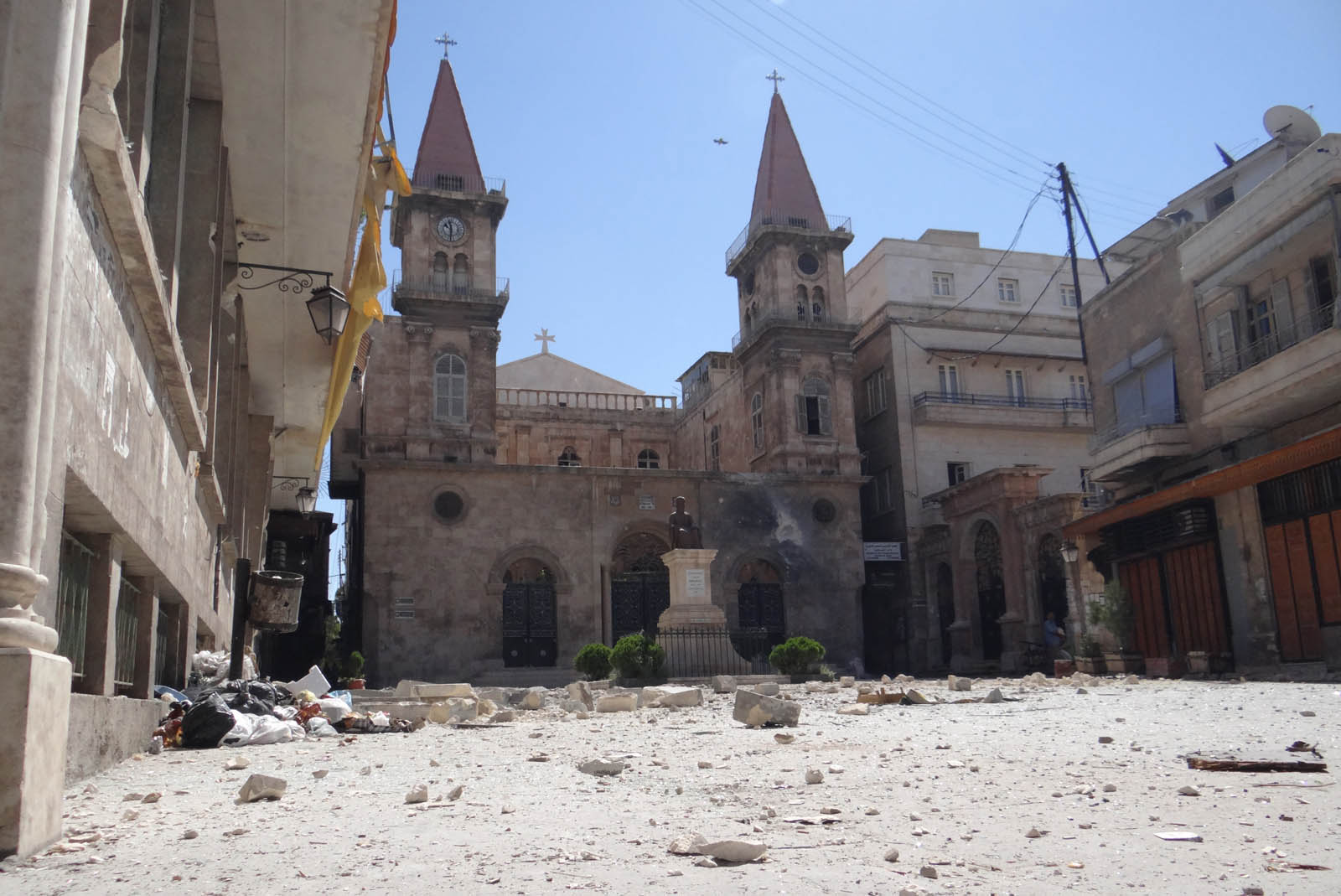 Aid to the Church in Need
Before: The Cathedral of St. Elijah in Aleppo was destroyed during the Syrian war.
“In the symbolic sense it is a message to the parishioners and Christians in Aleppo and the world that we are still in this country despite our dwindling numbers, and the restoration of the cathedral is proof of this. The mouths must continue to praise God in this place despite all the difficulties.”

The Cathedral of Saint Elijah, in the Al Jdeydeh suburb of Aleppo, has a long history, the present building having been constructed in 1873 and renovated in 1914, replacing the original small 15th-century church built on the same site.

During the Syrian Civil War, between 2012 and 2016, the cathedral suffered at least three extensive missile attacks and numerous less serious attacks. However, the worst damage happened in 2013 when the jihadist rebels broke through into this quarter of the city and attempted to destroy all signs of Christianity. 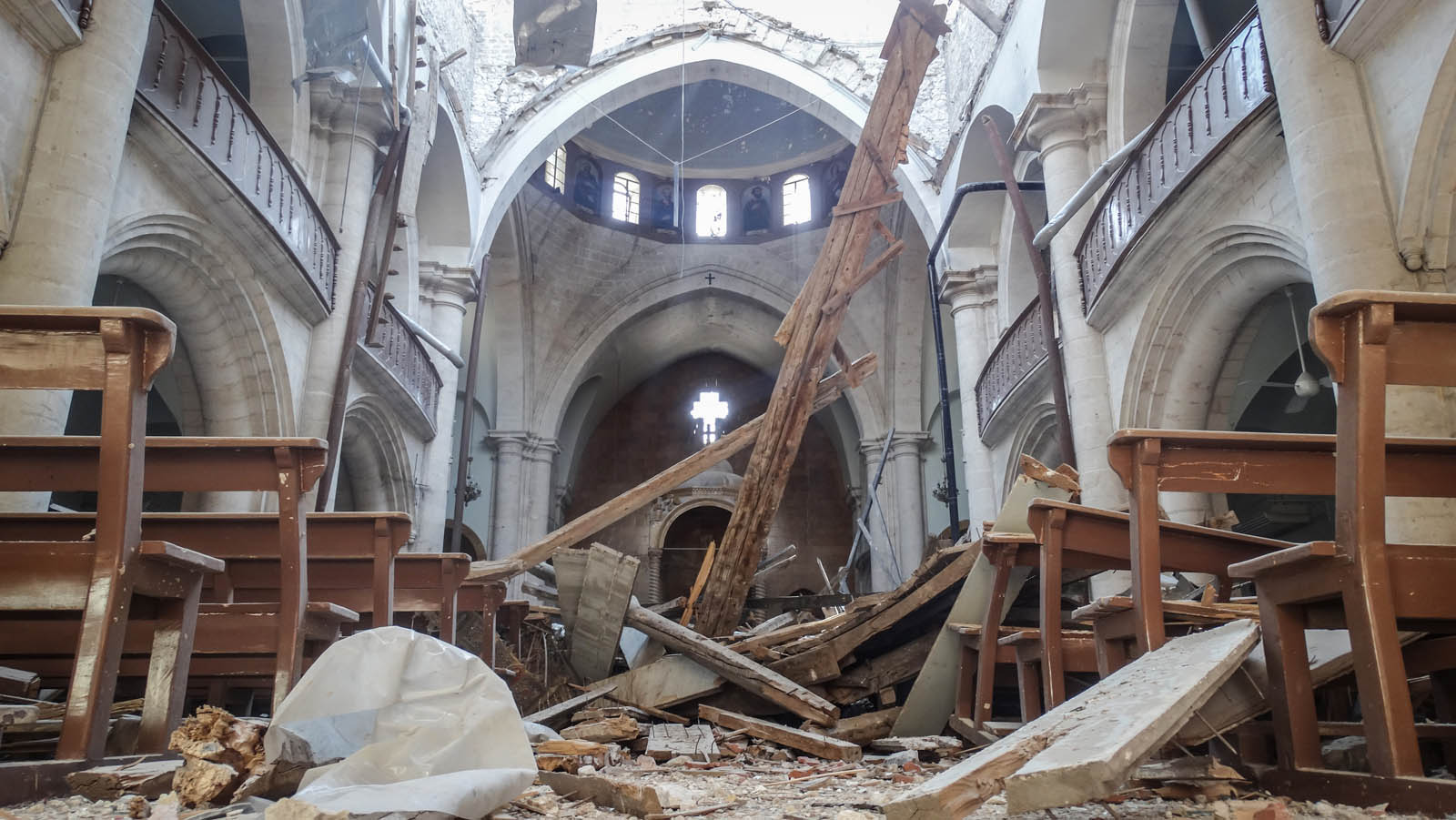 Aid to the Church in Need
Before: The interior of the Cathedral after it was destroyed by ISIS
After lying in ruins for four years, the cathedral was finally able to re-open it doors for Christmas 2016, despite its ruined state, after this part of the city had been liberated from rebel control earlier that year.

“We decided to send a message of hope that the Son of God was incarnate and He is still with us, accompanying us in our sorrows and pains, and carrying them with us, so that they transform into a life of hope, faith, love and thus a life of holiness”, Archbishop Tobji explained.

“The moment during the Mass when the Child Jesus was placed in the manger made of the ruins of the collapsed roof was very touching, as I, with the people attending the service, were crying and laughing at the same time, and everyone was clapping and cheering with joy.” 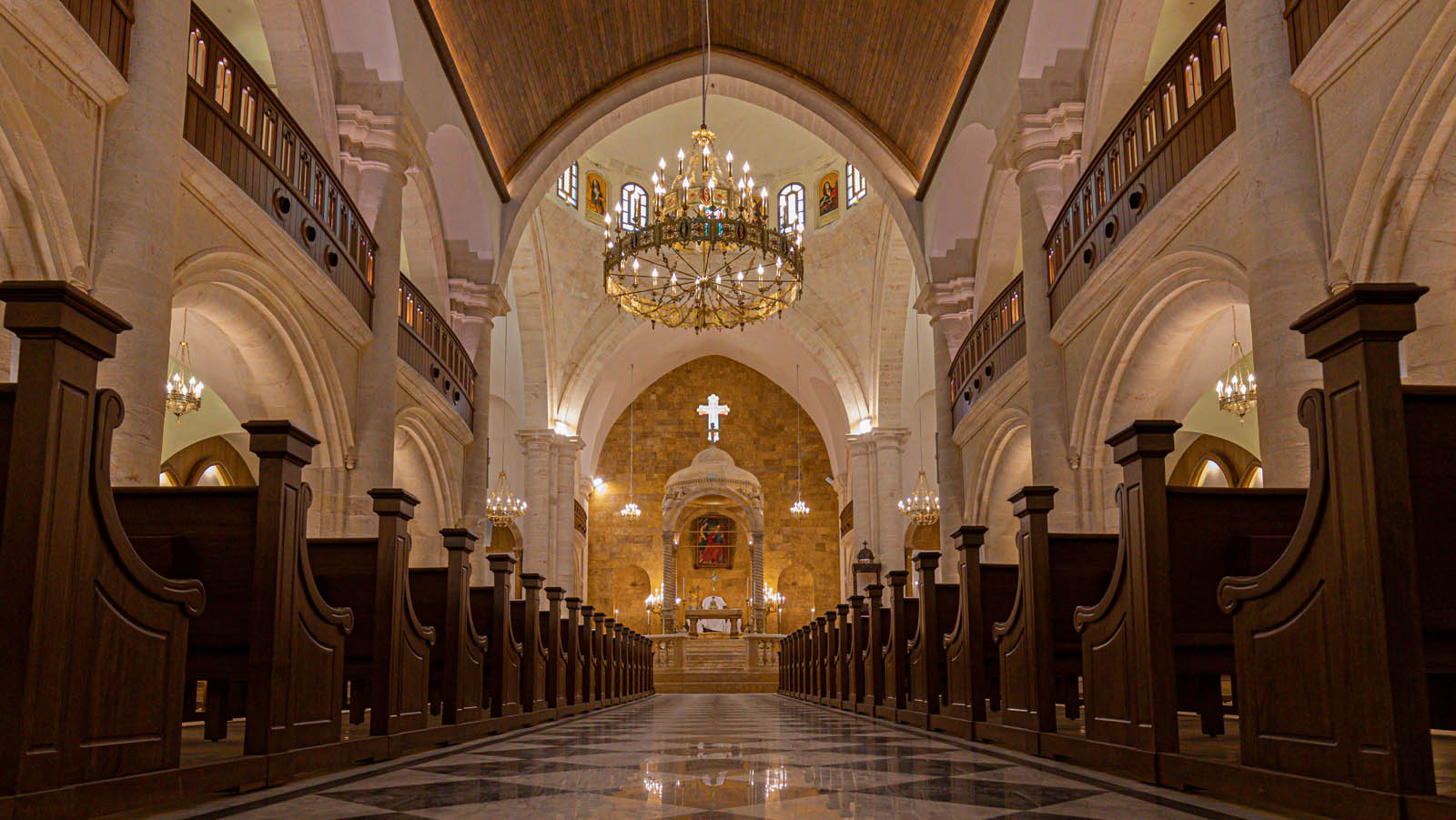 Aid to the Church in Need
After: The restored Cathedral
The Christians of Syria suffered greatly as a result of the civil war. Of the 1.5 million Christians who were living in the country before the war it is estimated that only one third now remain. The figures for Aleppo itself are similar: according to ACN sources there were around 180,000 Christians in the city before the war, of whom it is estimated that no more than 30,000 still live there.

The cathedral serves the Maronite Catholic community which, though not the most numerous in the city, nevertheless provides a major service of social and humanitarian aid for all the people.

“Our desire to stay is a ‘Mission’ and not just because we were born here, or because we are obliged to stay here against our will. We Maronites have no place to bring us together other than this cathedral, and the decision to restore it was self-evident, just like a family who wanted to renovate our only house that brought us together,” the Archbishop explained.

Thomas Heine-Geldern, the executive president of ACN International, which supplied most of the funding for the restoration of the cathedral, has sent a video message to the people of Aleppo, since on account of the coronavirus pandemic he is unable to attend in person.

“I am very saddened at being unable to join you on this day of joy,” he said.

“ACN has been with you throughout the most difficult times, and it would have been wonderful if we had been able to celebrate together today. Sadly, the circumstances do not permit this; however, we see the Cathedral of St. Elijah and it is a miracle. It is wonderful to see it shining with its former splendor. I hope that it will once again become the center of the whole Christian community, just as it was before this terrible war.”

Between 2011 and 2019 ACN International supported 900 projects within Syria to a total value of 38 million euros. Currently ACN is still sponsoring over 100 smaller and larger projects in the country.

The Cathedral of St. Elijah in Aleppo, destroyed during the Syrian war, rises from the ashes