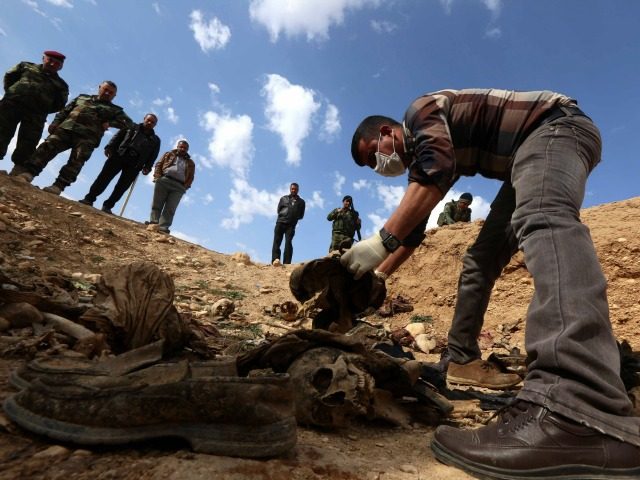 SAFIN HAMED/AFP/Getty, File
Ben Kew
A Yazidi family found what they believe are four of their elderly relatives in a mass grave in the front yard of their former home, local officials revealed this weekend.

Rudaw reported that the grave, which was discovered in the Gir Ozer subdistrict near Shingal, Iraq, held four of their family members aged between 60 and 80 years old.

The family, who lives in Snuny, north of Mount Sinjar, made the discovery after they were told last Thursday that their family home in Gir Ozer had been set alight by an unknown arsonist. Upon arrival, they discovered that their front yard had also been burned, along with the skeletal remains of their relatives. It appears that the corpses were dug up before being set on fire.

Despite the highly distressing nature of the situation, the family reportedly finally had closure over what happened to their relatives when the Islamic State (ISIS) took over the area and killed thousands of Yazidis.

“The four had opted to stay during the Daesh [ISIS] attack. We asked them to come with us. When ISIS arrived in this area, we did not manage to get them out of the house,” said Ghanim Qasim, a relative of one of the four.

“The grave contains my uncle and my uncle’s wife,” another of the relatives, Hassan Khidir, having searched for his relatives remains for six years. “We are collecting them [the remains]. We cannot do anything.”

According to figures from the Kurdistan Regional Government (KRG), 82 mass graves have been discovered since 2014, containing the bodies of around 1,000 Yazidis. At least ten of these graves were dug up in the last year, although they have not identified the culprits. Yet the mayor of Shingal, Fahad Hamid, said that they “suspect Daesh [ISIS] supporters to be behind the burning of the mass graves.”

“We cannot identify those committing such acts,” he said. “They are usually doing it during the night, and especially during the summer.”

The majority were victims of the 2014 Sinjar massacre, in which ISIS launched major offenses in Syria and Iraq, killing thousands of Yazidi men and women while holding girls captive and forcing them into sex slavery. Around 5,000 people were killed, while between 5,000 and 10,000 were kidnapped and held captive. The United Nations has since recognized the events as an act of genocide.

Survivors have largely been exiled from their ancestral lands in northern Iraq after militants destroyed large swathes of their infrastructure. There are an estimated 500,000 Yazidi refugees living across the Middle East, despite the fact that ISIS has been largely defeated.

Yazidis adhere to their own ancient religion, Yazidism, which ISIS viewed as a form of devil worship. Some identify as Kurds given their ancestral lands are in Iraqi Kurdistan. However, many consider themselves to have their own specific identity.