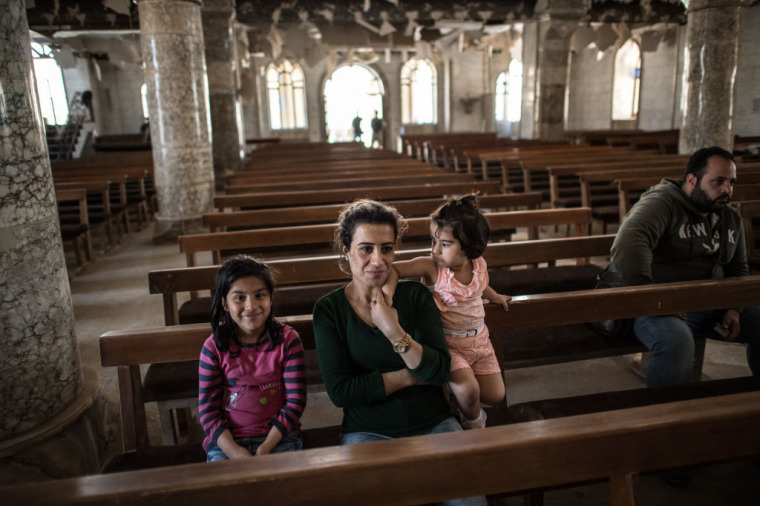 By Samuel Smith, CP Reporter
A woman and her children attend an Easter ceremony in Saint John’s Church (Mar Yohanna) in the nearly deserted predominantly Christian Iraqi town of Qaraqosh on April 16, 2017, near Mosul, Iraq. | Carl Court/Getty Images
Christians in Iraqi territory once held by the Islamic State still face the possibility of extinction as the Christian population there continues to dwindle following the military defeat of the jihadi death cult and the rise of Iran-backed militias in the area.

Aid to the Church in Need, an international humanitarian aid organization that has spent over $53 million to help Christians in Iraq in the last five years, published a lengthy report this week based on a series of surveys of Christians still living in the Nineveh Plains of Iraq.
Through the surveys, the organization identified the major challenges facing Iraqi Christians who returned to their hometowns in northern Iraq following the Islamic State’s invasion of the Nineveh Plains and the city of Mosul in 2014.

Sectarian and political tensions continue to be major factors driving the emigration of Christians from the region.

The report estimates that unless “urgent steps” are taken by the international community, the Christian community in the region could drop to just 23,000, which would suggest that about 20% of the Christian population that lived in the region before the Islamic State invaded in 2014 would remain.

According to Aid to Church in Need, the Christian community in the region would fall to the definition of “endangered with extinction.”

“The findings … make clear that restoring the stability of the Christian community in this post-conflict region is only possible with a concerted effort focusing on security, education, long-term economic opportunities, and reconstruction,” the report states.

Edward Clancy, the director of outreach for Aid to the Church in Need USA, said the international community must “take immediate and decisive action” to solve the issues “threatening the continuing Christian presence in Iraq.”

“It is more important than ever that world leaders work together to prevent Christian numbers falling further in Iraq,” he said.

A Message from Edifi – Christian Podcast App
Looking For Inspiring Christian Podcasts to Grow Your Faith?
Edifi is a powerful app that aggregates thousands of the best Christian podcasts in one place. Cut through the noise and grow your faith by diving into the world’s top Christian podcasts. Find entertainment and inspiration. Download the FREE app today!
Although the Islamic State was pushed from its territory three years ago, the survey shows that concerns about the terrorist group or like-minded groups are still prevalent for Iraqi Christians.

About 87% of Christians surveyed for the study said they feel “unsafe or absolutely unsafe.” Meanwhile, 67% believe that it’s “likely or very likely” that the Islamic State or a similar group will return to the area.

When the Islamic State had control of the area, hundreds of thousands of religious minorities were killed, enslaved and forced from their homes in the Nineveh Plains. But since the defeat of the Islamic State in the region, Christians have continued to flee or have not returned due to failing governmental infrastructure and the rise of two Iranian-backed militias operating on the Nineveh Plains.

Concerns have also been raised that once predominantly Christian towns are being repopulated with Muslims.

According to the report, 69% of Christians who said they plan to emigrate from Iraq cited “political and security reasons as the primary cause.”

It also found that all Christians surveyed who live in the area mentioned a lack of security.

Aid to the Church in Need highlighted the presence of the Shabak Militia and the Babylon Brigade as a “cause for concern.”

The Babylon Brigade is a militia that is part of the Popular Mobilization Forces whose members are predominantly Shia Muslim. However, its leader purports to be a Chaldean Catholic.

Meanwhile, the Shabak militia also has mostly Shia Muslim members from the Shabak minority community, which was also displaced by the Islamic State.

Last year, the militia’s leader was sanctioned by the U.S. government for extracting money from the local population through “extortion, illegal arrests, and kidnappings.” The leader of the Babylon Brigade has also been sanctioned.

“In some areas, militias have been accused of strategically positioning Shia Muslim shrines in prominent positions, sometimes in front of Christian monuments, as a form of intimidation,” the report reads.

The report raises serious concerns that both militias are operating with impunity.

“In particular, militias in the Nineveh Plains refused to comply with the Prime Minister’s instructions in July 2019 to disband and integrate into the Iraqi Army,” the organization warns.  “In part, this refusal to cooperate relates to entrenched economic and political interests. In part, it relates to a genuine fear of ISIS, and the feeling that such militias are needed to protect against the return of ISIS-like groups. The Shabak Militia is broadly supported by the Shabak population.”

According to the report, Bartella, a town in Iraq that was once home to 40,000 Christians before the Islamic State, is now populated by majority Shabak. Earlier reports have indicated that Iran funded the building of an elementary school, library and mosque in the once Christian town.

About 39% of those surveyed who live under an Iran-backed militia say they have been negatively impacted by a militia since the Islamic State was defeated.

Both militias have been the subject of numerous complaints. Aid to the Church in Needs admits that it is hard to verify all of the claims made against the militias but some rights groups, such as Human Rights Watch, have gathered evidence relating to alleged abuses.

The survey found that other common reasons for a desire for Christians to emigrate are unemployment, corruption and religious discrimination.

“The report is not pessimistic, but it is a clear warning because without concerted and immediate political action, the presence of Christians in the region of the Nineveh Plains and its surroundings will be eliminated,” Father Andrzej Halemba, who oversees Aid to the Church in Need’s projects in the Middle East, said in a statement.

According to Halemba,  about 36.2 percent of displaced Christians have returned to their homes in northern Iraq following the defeat of the Islamic State.

“The outlook is inevitably bleak because Christians feel that they have reached a turning point in terms of the viability of their presence in the region,” Halemba explained. “There are containment strategies, plans and initiatives that are not only feasible but sustainable if given regional, national and international cooperation. As many and varied as these strategies may be, what they all have in common is urgency.”

Aid to the Church in Need has helped restore 2,860 damaged or destroyed Christian homes across six communities in the Nineveh Plains in recent years.

But now, the organization is shifting its reconstruction efforts to focus more on Church-run buildings that need to be rebuilt or repaired.

According to the organization, at least 34 church-run buildings were destroyed while 132 suffered fire damage and 197 were partially damaged.

Halemba is calling for “the presence of a permanent representation of Christians in national and local government to ensure the defense of their fundamental human rights, especially the right to equal citizenship.”