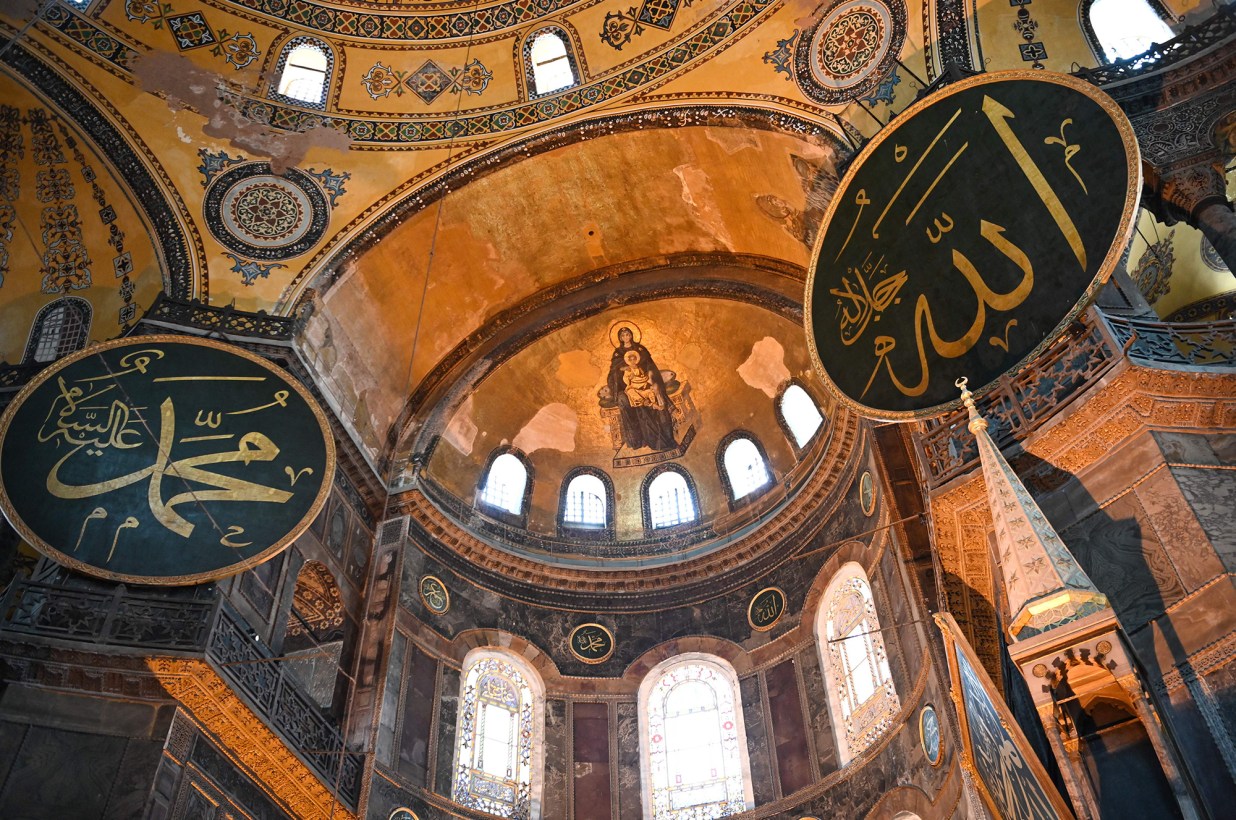 By Toufic Baaklini Enlarge Image
Turkish President Erdogan’s plan to convert the Hagia Sophia cathedral into a mosque has Christians on edge.AFP via Getty Images
From 1915 to 1923, the Ottoman Empire, the forerunner of modern Turkey, systematically killed more than 2 million Christians — 1.5 million ­Armenians and half a million Syriacs, Assyro-Chaldeans, Greeks and Maronites. During that ­period, half the populations of Tur Abdin and Mount Lebanon, among the Middle East’s final Christian strongholds, were slaughtered or died of famine.

To this day, the Turkish government denies this genocide. Now, what remains of the country’s Christian heritage is under attack from President Recep Tayyip Erdogan. The latest ­assault: The Islamist strongman wants to convert the Hagia ­Sophia, his nation’s most recognizable landmark, from a ­museum to a mosque. The move would all but complete the erasure of Turkey’s Christian heritage that began with a genocide a century ago.

Consecrated as a Byzantine ­cathedral in the 6th century, the Hagia Sophia (“Holy Wisdom”) was once Christianity’s largest cathedral and the historic seat of the Orthodox patriarch of Constantinople, as Istanbul was known for much of the last two millennia.

Eastern Christians for centuries viewed the cathedral as an unparalleled pilgrimage destination. Its relics included supposed pieces of the original Cross of Jesus Christ, as well as the lance that pierced the Nazarene’s side. Pilgrims sought healing from these and other items. You might say the Hagia Sophia was the Saint Peter’s Basilica of Eastern Christianity.

In 1453, following the defeat of historic Byzantium, the Ottomans converted the cathedral into a mosque as a symbol of their dominion over Turkey’s ­indigenous Christians. In the process, they desecrated and plastered over the early Christian icons, mosaics and frescos — though some pieces remain.

In 1934, Mustafa Kemal Ataturk, the secularist founder of modern Turkey, converted the Hagia Sophia from a mosque into a museum, as “a monument for all civilization.” This allowed people of all faiths to marvel at the Christian icons and the sheer beauty of the site without a religious litmus test to enter.

Erdogan, however, is unapologetically nostalgic for the days of the Ottoman Empire. His plan to convert the Hagia Sophia into a mosque is of a piece with his ­Islamist vision for the country, a vision that sits uncomfortably with the Hagia Sophia, a gigantic monument to what used to be called Christendom — right at the heart of Turkey’s most ­important city.

He mustn’t be allowed to go forward.

Clear statements from Secretary of State Mike Pompeo and Ambassador-at-Large for Religious Freedom Sam Brownback supporting the preservation of the Hagia Sophia as a museum are encouraging. But they lack the weight of the Oval Office. Now is the time for President Trump to recognize Turkey’s barbarous recent history — and to compel Erdogan to respect the heritage of his country’s indigenous Christian population.

Trump has made religious pluralism a centerpiece of his foreign policy. The seriousness of that commitment stands or falls in Turkey, a country that has ­become increasingly hostile to religious liberty. It’s why Trump should press Turkey to honor the status quo of the Hagia Sophia. This would follow his successful application of pressure on Ankara to secure the release of American pastor Andrew Brunson, a former prisoner of conscience in Turkey.

Beyond these historic and cultural issues, the United States should more broadly reassess its relationship with Turkey — a move that is long overdue.

The world’s most notorious genocide denier, Erdogan, is also infamous for imprisoning journalists and public intellectuals. Turkey’s egregious human-rights violations also include the ethno-sectarian expulsion of Syriacs in northern Syria and the destruction of more than 500 Greek Orthodox churches in Turkish-occupied areas of Cyprus.

At one point, Turkey was a reliable, pro-Western ally. But that is no longer the case, and the American people are always better off when foreign policy deals with reality as it is, rather than as we would wish it to be.

Persuading Turkey to maintain the Hagia Sophia’s status quo would be a monumental step in the right direction — and cement the president’s legacy as a stalwart advocate of religious pluralism in the Middle East.

Toufic Baaklini is the president of In Defense of Christians.

Churches express solidarity for Lebanon, wounded by the explosions

The Chaldean patriarch joins the Maronite Church, which will hold…

Young ministers of mercy Food, clothes and medicine in urgent…

By John Pontifex THOUSANDS of young Christian volunteers are on…

Lebanon’s Catholic leaders seek help; here’s where you can donate

Beirut is a 'devastated city;' the Church has a 'duty'…

By Michael Gryboski, Christian Post Reporter A man sits inside…

Lebanon's Catholic leaders seek help; here's where you can donate

Son of an Iraqi immigrant sets his sights on Washington

Eric Esshaki is running for the Republican nomination for Congress…

MENASource by Paul Gadalla Iraqi Christians attend a mass on…

A Yezidi woman’s journey to freedom, six years after abduction…