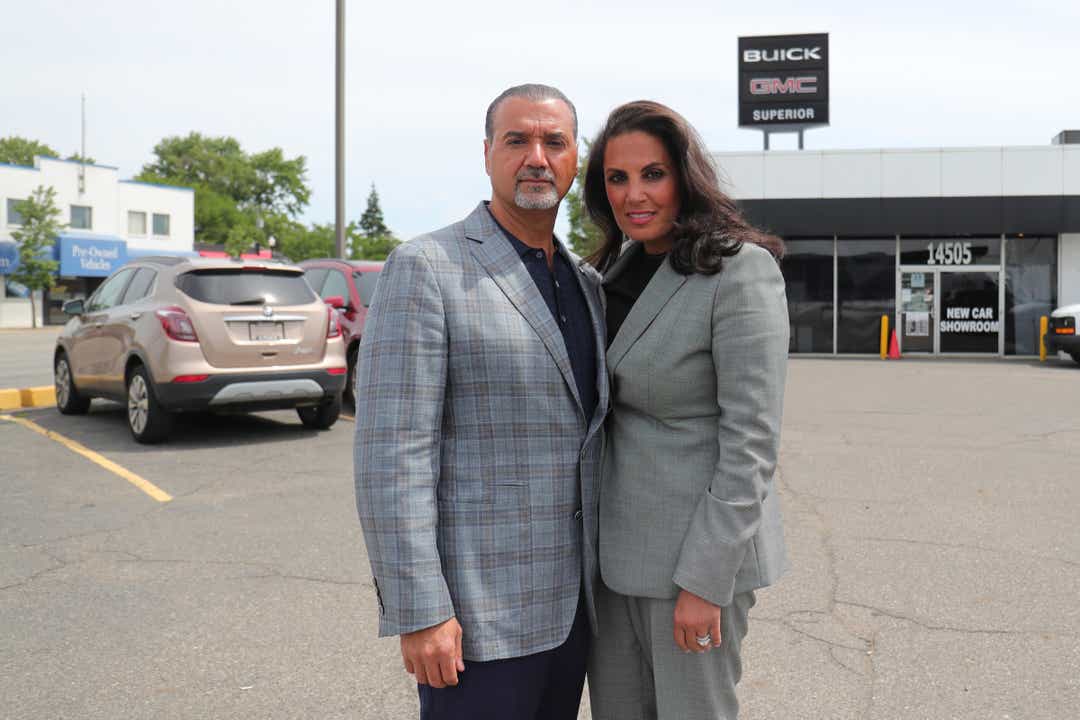 Owned by an Iraqi-American couple since 2015, the dealership has won awards for its sales and customer experience.

But now, Tanya Robin and her husband, Bas Robin, are alleging that GM executives made racially inflammatory remarks about Arab Americans and customers with interracial families.

The Robins claim in a lawsuit filed last month against GM and GM Financial that the dealership they owned lost sales and suffered financially after the auto company cracked down on them.

Filed in U.S. District Court in Detroit, the lawsuit alleges that GM executives raised questions about how their employee family discount program was used by customers purchasing vehicles at the Dearborn dealership.

The lawsuit alleges that GM forced the dealership to require customers, many of them minorities or some with minority family members, to go through excessive requirements not required at other dealerships.

GM “knew that the majority of plaintiffs’ customers of the Dearborn dealership were Arabs, including Chaldeans and immigrants of many other ethnicities,” the lawsuit says. “GM was motivated by an improper bias against GM dealerships that have a relationship (i.e., principals) with persons of the Arab racial identity.”

The lawsuit says the Robins faced “intimidating and disparate treatment,” that “many customers felt insulted and falsely targeted due to their national origin and ethnicity.”

The lawsuit alleges that at a meeting in May of 2019 at GM headquarters in Detroit, some executives made what the Robins say were disturbing remarks about minority groups. Two local groups, the Chaldean American Chamber of Commerce and the Chaldean Community Foundation, have expressed concern about the case.

In a statement, GM spokesman Jim Cain said the Dearborn dealership was to blame for its problems.

“The lawsuit and its claims are wholly without merit and the allegations of discrimination are absolutely false,” Cain said. “Unfortunately, and as acknowledged by plaintiffs, these particular dealers failed and refused to adhere to the terms of their agreements and violated requirements established to prevent abuse of a GM incentive program.”

Cain added that “GM has an excellent record for diversity and inclusion, and GM possesses the industry’s most comprehensive program for minority dealer development. GM intends to vigorously defend this meritless lawsuit and seek relief.”

Cain said that GM attorneys are planning to file a motion to have the case dismissed.

GM has 287 minority-owned car dealerships, more than any other auto company in the U.S., Cain said.

Martin Manna, president of the Chaldean Community Foundation, said that the Dearborn dealership is believed to be the only Chaldean-owned GM dealership in the country.

“The Chaldean American Chamber of Commerce and the Chaldean Community Foundation are deeply concerned about the unfair and discriminatory treatment of Tanya Robin and Superior Buick GMC by General Motors,” Manna said. “It’s clear there has been a deliberate attempt to harm the dealership by imposing requirements that were not imposed equally across GM dealerships. These requirements have been offensive to GM’s only Chaldean owned dealership and the thousands of customers they serve who are of Middle Eastern descent.” 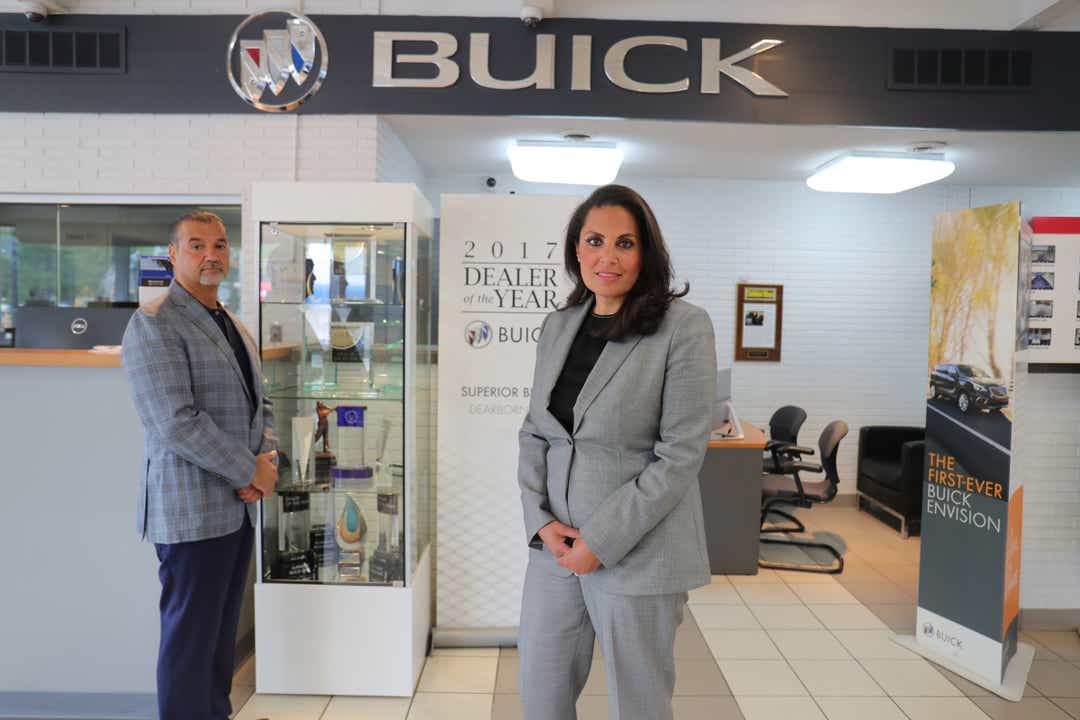 Bas and Tanya Robin at their Superior Buick Cadillac GMC dealership in Dearborn Friday, June 26, 2020.
Kirthmon F. Dozier, Detroit Free Press
According to the lawsuit, the problems started in Feb. 2019, when GM “commenced an illegal scheme to, among other things, discriminate and harm plaintiffs.”

There was a financial dispute between the dealership and GM over 30 GMC Yukons the dealership had ordered from a Texas plant whose delivery was delayed because of a flood.

In May 2019, the Robins met with four GM executives, including its Vice President for Global Buick and GMC, to discuss the dispute.

At the meeting, the executives “raised with the Robins certain issues that they purportedly had concerning the plaintiffs’ compliance with a GM employee family discount program” that’s known as the Vehicle Purchase Program (VPP), the lawsuit said.

The lawsuit alleges that during the meeting, two of the GM executives “stated several times to the Robins that Superior sells ‘too many cars to Arabs with GMS codes from aunts and uncles’ and that customers utilizing the GM employee family discount program in question could not possibly be related to sponsors because the customer did not have an Arabic last name as the sponsor.”

GMS codes refers to GM employee codes that provide a discount to employees or their family members.

The lawsuit said: “The clearly blatant racist remarks continued throughout the meeting.”

At one point during the meeting, the lawsuit alleges,  one GM executive said to another GM executive: “If I’m white and you are black, that is an automatic reason to question whether you qualify for the VPP.”

The Robins were given a letter which said they violated their dealer agreement because of violations of the VPP.

The “letter also required both plaintiff dealerships to obtain approval from GM’s VPP department when using the VPP to provide the customer a discount.  To obtain this approval plaintiffs’ prospective VPP customers were required to provide a birth certificate, marriage certificate, and other documents to prove their relationship to the employee discount holder,” said the lawsuit.

The lawsuit said “the Robins acknowledged that there may have been some prior deficiencies by certain of their salespeople and other staff with regard to the VPP and other discount plans, which were uncovered in 2018, they strongly outlined how that issue had been corrected and more closely monitored.”

The new rules GM placed on the dealership led to harassment of customers, the Robins allege.

One case involved a 37-year-old employee of GM who was white and sponsoring a car to be purchased by a father-in-law who is Black, the lawsuit said. His wife is Black.

“The customer received a telephone call from a Superior Buick employee, ordered to do so as result of GM’s ‘new rules’ for this dealership, asking him to prove that he was related to his father-in-law,” the complaint reads  “The customer informed Tanya Robin of the incident by email, stating that he felt he and his family were being racially targeted due to the fact that his wife and father-in-law were African-American and he was Caucasian.”

Tanya Robin then forwarded the concerns to a regional director at GM who “told Tanya Robin that the reason for the call was that since the sponsor was black, his son -in-law could not possibly be white,” according to the lawsuit.

Leonard Bellavia, one of the attorneys who filed the lawsuit, said in a statement the Robins’ previous success in sales was ruined “based upon racist stereotypes against Arabs.  GM effectively disqualified them from participating in the GM employee discount program by requiring potential buyers of GM vehicles of Arab descent to produce birth and marriage certificates as a condition of proving they are related to white American GM employees.

He added: “GM executives maintained that American Caucasians could not be related to Arab people and caused the dealership to suffer by appearing racist and refusing  to honor the employee discount. … No such requirement of confronting people of color or Arab background  is imposed on any other GM dealer and is allegedly borne out of an intentional desire to destroy the success of entrepreneurs who do not fit the apparent preferred profile of GM dealers.”

The bells of St. Joseph's Chaldean Cathedral echo across Baghdad,…

According to Article 18, a religious freedom website, “Zaman Fadaee,…

Michigan man who fought deportation to Iraq sworn in as…

Iraq is witnessing a surge in coronavirus cases to more…

Iraq’s decision to shut down IDP camps too hasty, NGOs…

By John Pontifex AN oxygen machine is to be despatched…

100 days on, the rebuild begins

Christian advocates call for U.S. to condemn aggression against Armenians

Iraqi priest doubles down on Christianity’s survival in the Middle…

Chaldean priest sees Mosul reborn thanks to young Christians and…

The controversy that broke out between France and part of…