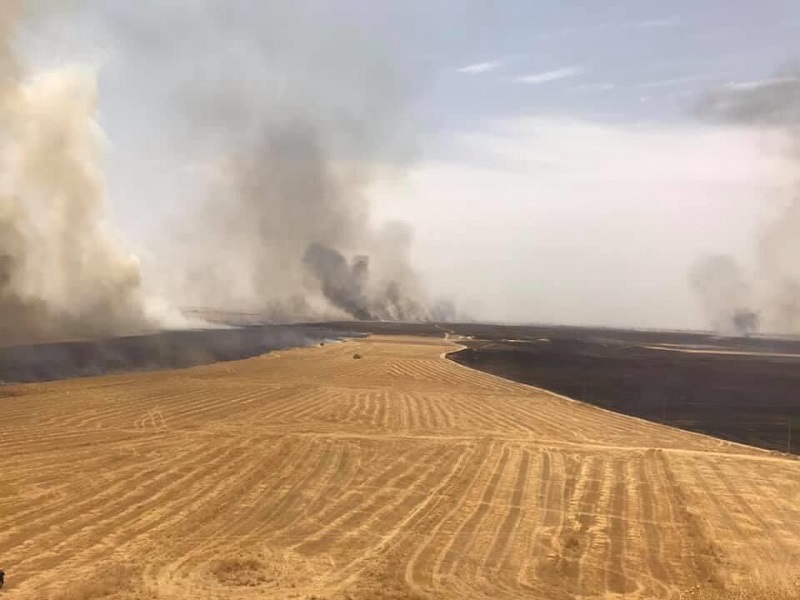 By Claire Evans
06/22/2020 Washington D.C. (International Christian Concern) – Once again, the crops of Iraqi Christian farmers have burned. Charred earth spreads seemingly forever near Karmalesh, a small Christian village devastated by ISIS’s genocide. Some locals had returned as part of an attempt to rebuild their lives following displacement. The farmers amongst them planted seed. But the fire destroyed any hope of profit. “I am sad for the farmer who was waiting for the harvest to make some income for his family; all or part is gone,” said a Karmalesh local.

It was not the first fire that Iraqi Christians have experienced, nor is it the last. Many feel that wherever they live in Iraq, disaster follows. In the case of Karmalesh, it was declared an innocent fire. But it triggered memories of more sinister flames that resulted from sectarian tension. The parish priest shared on social media, “our investigation shows that the fire took place because kids were playing with fire. We do not accuse anyone for that fire, and there are no ongoing conflicts among minorities.”

Many were quick to point out that one innocent yet devastating fire does not mean that the others were also innocent. They remember their history and how fires are a constant consequence of poor governance contributing to persecution.

Following the Karmalesh fire, Milad, a self-described Christian activist, explained, “The Federal Government in Baghdad and the Kurdish Regional Government always avoid saying the truth to prevent a possible ignition for a long civil war among minorities on these disputed areas. Both governments are neglecting the truth instead of chasing and looking for the guilty, especially since the burning is happening to the most important products in Iraq.”

“The governments are neglecting the evidence. Many times they have found phones and lenses. Both are a good start if the government wanted to look for who did the burnings,” he continued.

Last year, the number of fires targeting Christian areas was significantly higher. They occurred within the context of ISIS and Iranian-backed militias jostling for control of these territories. COVID-19 may be keeping people at home, but they maintain these memories along with the expectation that these problems will resume when normal life returns.

“Every time the local state government announces that the state has become self-sufficient with products, we witness fires. I think ISIS has a hand on these fires to create tense circumstances. Iranian militias on the other side have a hand in this, as well, to create discord among (religious) minorities,” shared a Christian woman.

She continued, “also the import products are from Iran, and they refresh its economy. Since the US siege on Iran, we are witnessing crop fires every year. Also, we couldn’t see any investigation about this. We can see fires in Wasit, Najaf, Diwaniya, Diala, Anbar, and even Sinjar had its portion of these fires.”

Looking at the Karmalesh fire within this broader context discourages many. After all, Christians had just survived ISIS, and now these problems exist. Maybe some fires are innocent; maybe some are not. But the outcome is the same. “We don’t have the capability to get more destruction. It is enough what happened back in 2014, (ISIS) displacement and losing everything. The community can’t stand any other hurts,” says a local Christian.

For those Christians who live in the cities, watching the situation of these villages is done with great interest. Many have a family connection with these villages. While they no longer live there, the situation of the Christian villages is often viewed as an indicator of bigger problems facing the country. Problems which disproportionately and negatively impact Christians, whether they live in cities or villages.

A Baghdad physician’s personal story serves as an example. Natalia recalls farms burning during a wave of persecution made more complex by a country at war. She shared how her “grandfather and grandmother used to eat Iraqi dates. They liked it very much, but it is much easier to buy Iranian dates than Iraqi brands. That’s what Iran worked in since 2006. During the civil war, they set fires on the largest date farms in Baghdad and Basra. You still can see how these farms till the moment (today) have no fruit. The date trees were burnt or cut from the top.”

Christians live in Iraq’s agriculturally richest areas, making stories like this a haunting reminder about what is at stake whenever a farm burns. These past stories creep into the present and are made all the more real by Iraq’s deepening political problems. “I think what is happening in the Nineveh Plains are threats on Christian existence. I think the political parties are the ones who get the benefit of this. (They are) importing from Iran, Turkey, and other countries allow them to make more money by getting bribes at the borders and checkpoints,” said another Baghdad resident.

Was the Karmalesh fire innocent? Maybe. But as the smoke settles, it’s clear that for many Iraqi Christians, what remains is mistrust, apprehension, and often despair for the future.
For interviews, please contact Olivia Miller, Communications Coordinator: press@persecution.org

When the Smoke Clears, What Remains?