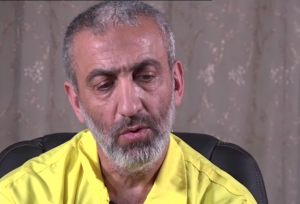 Iraq said on Wednesday it had arrested Abdul Nasser Qardash, a militant who had been operating since before the extremist group was formed.

However, analysts said Qardash was arrested last year in Syria and recently handed over to Iraq by Kurdish forces.

In an interview with Al Arabiya, Qardash described the divisions within the extremist group that once held control of large parts of Syria and Iraq.

He said he was in direct contact with Al-Baghdadi, who was killed by US special forces last year. He is also known to the new leader Ameer Muhammed Saeed Al-Salbi Al-Mawla, who is also known as Haji Abdullah, or Abdullah Qardash.

Speaking about Al-Baghdadi, Abdul Nasser Qardash said: “He was known to be so firm and would not retract his decisions easily.”

However, the current leader is “not as firm,” he said.

He said there was a deep divide within Daesh between the Arab members and the “foreigners,” as well as the theft of funds and the expelling of families during battles.

He also said there were disputes over the killing of prisoners. The group specialised in brutal executions and beheadings, which they videoed and posted online as part of its warped propaganda.

“We had to revise some of the group’s ideas after losing some territory,” Qardash said.

It was unclear where exactly the interview took place.

The new Iraqi Prime Minister Mustafa Al-Kadhimi on Thursday referred to Qardash’s “capture” and said it helped foil a terrorist attack. He also said Daesh activity in Iraq was increasing.

In announcing Qardash was in custody, Iraqi state media said that he was also considered a successor to Al-Baghdadi.

However, this appears to overstate his role.

Born in Mosul, Qardash fought with Abu Musab Al-Zarqawi, the leader of Al-Qaeda in Iraq, which was the predecessor of Daesh.

He chaired Daesh’s delegated committee but told Al Arabiya he was removed from this position after a meeting with Al-Baghdadi, because they “disagreed of some points of view.”

He oversaw several military operations in both Syria and Iraq.

Al-Baghdadi blew himself up in October after he was cornered by US special forces in a cave at his hideout in Syria.

Daesh emerged in 2011 as an extremist faction in the Syrian conflict that installed brutal rules and punishments in the territory it controlled. In 2014, it launched an attack into northern Iraq, sparking fighting with government troops, militias and an international coalition that eventually beat the extremists out of Iraq’s main cities by the end of 2017.