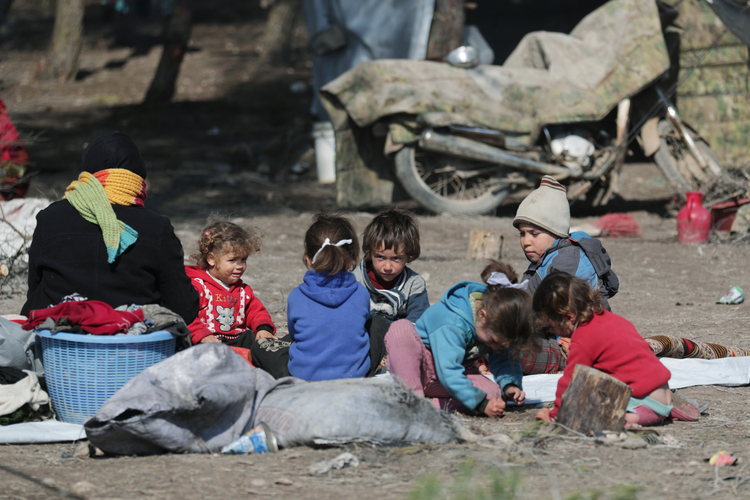 Gerard O’Connell
Syrian children sit on the ground at a makeshift camp in Qatmah Feb. 17, 2020. The Sept. 27 celebration of World Day of Migrants and Refugees will emphasize people displaced within their own countries. (CNS photo/Khalil Ashawi, Reuters)
Pope Francis has called on Catholics worldwide to show particular concern and care for the 51 million internally displaced persons in over 61 countries around the world because of “situations of conflict and humanitarian emergencies, aggravated by climate change” and “living in a state of poverty” that have been exacerbated by the Covid-19 pandemic.

He said he decided to devote his Message for the World Day of Migrants and Refugees, which the church will celebrate on Sept. 27, 2020, to these internally displaced persons because their “often unseen tragedy that the global crisis caused by the Covid-19 pandemic has only exacerbated” risks being overlooked at this time.

He called on people not only to care for the internally displaced, “but also to embrace all those who are experiencing situations of precariousness, abandonment, marginalization and rejection as a result of Covid-19.”

The pope also called on people “to embrace all those who are experiencing situations of precariousness, abandonment, marginalization and rejection as a result of Covid-19.”

He gave his message the title “Like Jesus forced to flee” to remind people that during the flight to Egypt “the child Jesus experienced with his parents the tragic fate of the displaced and refugees, which is marked by fear, uncertainty and unease.”

He reminded all Christians that “in each of these people, forced to flee to safety, Jesus is present” and that “in the faces of the hungry, the thirsty, the naked, the sick, strangers and prisoners, we are called to see the face of Christ who pleads with us to help.” Displaced people, he said, “offer us this opportunity to meet the Lord, even though our eyes find it hard to recognize him: his clothing in tatters, his feet dirty, his face disfigured, his body wounded, his tongue unable to speak our language.”

Two members of the Jesuit Refugee Service highlighted the plight of the internally displaced in an online press conference from the Vatican press office in Rome this morning, May 15: Joseph Cassar, S.J., the JRS director in Iraq, and Ms. Amaya Valcárcel, international coordinator for advocacy.

Father Cassar reported that roughly 6 million people were displaced in Iraq after the Islamic State gained control of parts of the country (and also parts of Syria) in 2014, and today 1.4 million people are still displaced. The word he hears most often from them is “forgotten” because they feel the world has forgotten them. He reported also that around 320,000 mainly Yazidis (survivors of a 2014 genocide) are being hosted in the Kurdistan region of Iraq.

He explained that “protracted displacement, coupled with limited prospects of return in the short-to-medium term, takes its toll on the lives of people. Among the young especially, the sense of ‘no future’ contributes to an increased incidence of suicide.”

He said “another very important aspect of the mission of J.R.S. is among recently returned populations in the Nineveh Plains of Iraq, mainly though not exclusively Christians.” Though returnees are not actually counted among the displaced, “the impact of displacement on the lives of hundreds of thousands of recently returned persons is hard to overstate.” He reported that “among the displaced, the recently returned, host communities, and all people of good will, the desire for peace could not be stronger. In Iraq, displacement has been going on for at least 40 years. The causes are numerous and there are no easy solutions.”

“At the start of 2019 an estimated 4.1 million persons were in need of humanitarian assistance in Iraq,” but due to the pandemic “this figure is set to rise sharply.”

Moreover, he said, “the Covid-19 outbreak in Iraq and the mitigation measures imposed by public health and security authorities have had ramifications on almost all aspects of public and family life and disrupted the economy.”

Father Cassar recalled that “at the start of 2019 an estimated 4.1 million persons were in need of humanitarian assistance in Iraq” but due to the pandemic “this figure is set to rise sharply since already vulnerable households will increasingly be unable to meet even their most basic needs and are already resorting to negative coping strategies that will deplete their existing scarce resources and push them deeper into debt.” Moreover, he said, “both [internally displaced persons] and recent returnees, and the most vulnerable among them, account for a very substantial segment of this population.”

He concluded with a plea to the international community that “apart from the obvious financial response, now is the time for a massive investment in peace.”

J.R.S. is present in 56 countries and works with displaced persons in 14 of them.

Ms. Valcárcel noted that J.R.S. is present in 56 countries and works with displaced persons in 14 of them. Since the war began in Syria 10 years ago, 6.5 million people have been forced to leave their homes, and JRS has been working with displaced persons there since 2011, seeking to provide medical care, education and much else. She reported that Covid-19 has added to the great sorrow of the Syrian population, where 80 percent are living under the poverty level. The JRS health care programs continue to function, but education has to be done online.

She reported also on the tragic situation of 450,000 displaced persons due to ethnic conflict in Myanmar, and the clashes between the army and armed ethnic groups since January of this year. She said the church there and many organizations have appealed for a ceasefire because of the coronavirus pandemic. She underlined the great risk from the pandemic that many displaced persons are facing there and in Kachin state, where JRS is working among the 100,000 displaced persons.

She recalled too the dramatic situation in Colombia, where there are 5.5 million displaced persons as a result of the civil war, as well as another 1.8 refugees from nearby Venezuela. Likewise, she reported that “probably the world’s most forgotten conflict” is in the Democratic Republic of the Congo, where groups seeking to gain control of the country’s rare mineral resources have participated in a conflict that has displaced 5.5 million people over two decades. The population of the DRC is increasingly vulnerable due to Covid-19.

Pope Francis has called us to respond to migration in ways expressed by four verbs: “welcome, protect, promote and integrate.” I

Cardinal Michael Czerny, S.J., and Fabio Baggio, C.S., the two undersecretaries of the Vatican office for Migrants and Refugees, presented the pope’s message at an online press conference. Cardinal Czerny recalled that the tradition of celebrating World Day of Migrants and Refugees dates back to 1915, and was first linked to “the massive upheaval caused by World War I” and then to the Spanish flu (1918-19), but today it takes place in the context of the pandemic.

Father Baggio explained that in the past Pope Francis has called us to respond to the phenomenon of migration in its various forms by taking action in ways expressed by four verbs: “welcome, protect, promote and integrate.” In today’s message, he said, Francis has developed this approach further with “six pairs of verbs that deal with very practical actions and are linked together in a relationship of cause and effect.”

First, “you have to know to understand,” the pope said in his message. “Knowledge is a necessary step towards understanding others.” It is necessary to meet and get to know migrants and their stories, he said, because only then “we will be able to understand, for example, that the precariousness that we have come to experience as a result of this pandemic is a constant in the lives of displaced people.”

“In order to grow, it is necessary to share,” the pope said. He recalled that “sharing was an essential element of the first Christian community.”

Second, “it is necessary to be close in order to serve,” Francis said. But he noted that often “fears and prejudices—all too many prejudices—keep us distant from others and often prevent us from ‘becoming neighbors’ to them and serving them with love.” He emphasized that “drawing close to others often means being willing to take risks, as so many doctors and nurses have taught us in recent months.” He continued, “Jesus gave us the greatest example of this when he washed the feet of his disciples.”

Third, “In order to be reconciled, we need to listen,” the pope said, because “it is only through humble and attentive listening that we can truly be reconciled.” He noted that “silence has reigned for weeks in our streets. A dramatic and troubling silence, but one that has given us the opportunity to listen to the plea of the vulnerable, the displaced and our seriously ill planet.” He added, “listening gives us an opportunity to be reconciled with our neighbour, with all those who have been ‘discarded,’ with ourselves and with God.”

Fourth, “in order to grow, it is necessary to share,” the pope said. He recalled that “sharing was an essential element of the first Christian community.” He added that “the pandemic has reminded us how we are all in the same boat. Realizing that we have the same concerns and fears has shown us once more that no one can be saved alone. To grow truly, we must grow together, sharing what we have.”

Why I have not left my Jesuit mission in Africa during the coronavirus pandemic
Matthew Ippel, S.J.

Who suffers most during the coronavirus pandemic?
David Hollenbach
Fifth, “we need to be involved in order to promote,” he noted. He noted that “the pandemic has reminded us of how essential co-responsibility is, and that only with the contribution of everyone—even of those groups so often underestimated—can we face this crisis.”

Sixth, “it is necessary to cooperate in order to build,” the pope said. “Building the kingdom of God is a duty common to all Christians, and for this reason it is necessary that we learn to cooperate, without yielding to the temptation to jealousy, discord and division. In the present context it should be reiterated: ‘This is not a time for self-centeredness, because the challenge we are facing is shared by all, without distinguishing between persons.’”

“We must commit ourselves to ensuring international cooperation, global solidarity and local commitment, leaving no one excluded,” Francis concluded.
[Explore America’s in-depth coverage of Pope Francis.]