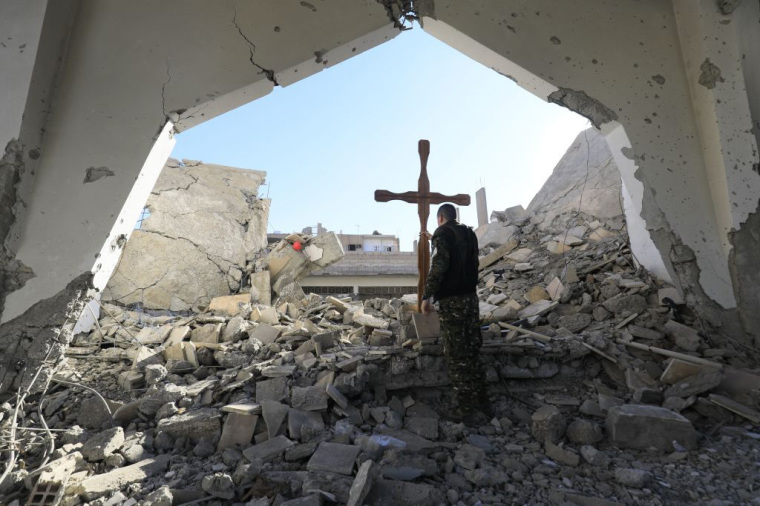 By Samuel Smith, CP Reporter A member of the Syrian Arab-Kurdish forces places a cross in the rubble ahead of a Christmas celebration at the heavily-damaged Armenian Catholic Church of the Martyrs in the city centre of the eastern Syrian city of Raqa on December 26, 2017 following a mine clarence operation at the site a few days earlier. A US-backed offensive ousted the Islamic State group from Raqa in October but the city has been left ravaged by fighting, and only a small percentage of its pre-war population has returned as the year draws to a close. | DELIL SOULEIMAN/AFP via Getty Images
A Syrian Islamic rebel group has been confiscating Christian-owned properties in Idlib, according to a new report released by a Syrian human rights watchdog.

“Christians in Idlib province face the injustice of jihadist organizations and violations by Islamic factions, in terms of applying ‘Islamic Sharia law’ to members of different religious communities,” an April 25 report released by the U.K.-based Syrian Observatory for Human Rights reads.

The group warns that Islamic factions in the war-torn province in northwestern Syria are “clamping down” on Christians and imposing “Jizya,” a hefty tax imposed on non-Muslims.

SOHR warns that the imposition of Jizya, which was imposed by the Islamic State during its reign of terror in Iraq and Syria, is an attempt by Islamic groups to force Christians “to leave their homes to regime-controlled areas.”

According to SOHR, Idlib has been administered by different Islamic factions ranging from Al-Fateh Army to “Salvation Government,” the civilian wing of Hayat Tahrir al-Sham (HTS). HTS is a Sunni militant group that formed in 2017 as a merger of militant factions including Al-Nusra Front.

“HTS has clamped down on the Christians of Idlib city, pursuing the landlords and occupants of their properties,” the report states. “The office of ‘Christians’ properties’ of HTS, which considers as spoils, has notified tenants to check with the administrative offices, to renew the contracts and set new terms, including raising the rents of houses and shops.”

According to SOHR, the factions have informed the tenants that the office has the “right to rent, acquire and dispose of property at any time.”

Civilians within the Christian community in Idlib who have fled from their homes are barred from appointing someone “to change a ruling made by the Sharia courts regarding their property,” according to the watchdog.

“Similarly for the civilians of the Christian community in western countryside of Idlib, in the city of Jisr al-Shughour and the villages and towns of Ya’aqubiya, Al-Qunaya, Al-Jadida, Al-Ghassania and Halauz, where HTS and the office of the spoils, are disposing of properties in order to support the fighters’ families,” the report concludes. “The issue of the property of Christian families remains under the control of radical groups of Tahrir Al-Sham Organization despite their attempts to change their policies to exploit the Syrian people’s revolution.”

A Message from Edifi – Christian Podcast App
All Your Christian Podcasts In a Single App
Edifi gives you today’s most popular Christian podcasts all in a single app experience you can trust. Edifi’s powerful app aggregator offers the most Christian-centric streaming audio experience in the world today. Download edifi NOW for Free!
This week, the U.S. Commission on International Religious Freedom released its annual report. In the report, the commission called on the U.S. State Department to label Syria as a “country of particular concern,” the agency’s worst designation when it comes to the issue of religious freedom.

The CPC designation carries with it the potential for crippling sanctions for countries that “systematic, ongoing, and egregious violations of religious freedom.”

Additionally, USCIRF recommended in the report that HTS be designated by the State Department as an Entity of Particular Concern, a designation given to non-state actors.

USCIRF contends that HTS “persisted in religious repression, including the assault and stoning of an Armenian woman in July.”

According to USCRIF, HTS is engaged in “systematic, ongoing, and egregious violations of religious freedom” as defined by the International Religious Freedom Act.

The State Department already recognizes HTS’ subsidiary Al Nusra Front as an EPC and as a designated foreign terrorist organization. USCIRF stresses, however, that the EPC designation should not be limited only to al-Nusra Front.

Syria is ranked on the 11th on the Open Doors USA 2020 World Watch List of countries where Christians are most persecuted.

According to Open Doors, the yearslong Syrian civil war has left the country in turmoil and Christians have not been spared from suffering as they are caught in the crossfire between government and rebel forces.

“Additionally, Christians are at risk if forces antagonistic to Christianity rule their home regions,” an Open Doors fact sheet explains. “In areas controlled by radical Islamic groups, most historic churches have been either demolished or used as Islamic centers. Public expressions of Christian faith in these regions are prohibited and church buildings or monasteries cannot be repaired or restored irrespective of whether the damage was collateral or intentional.”