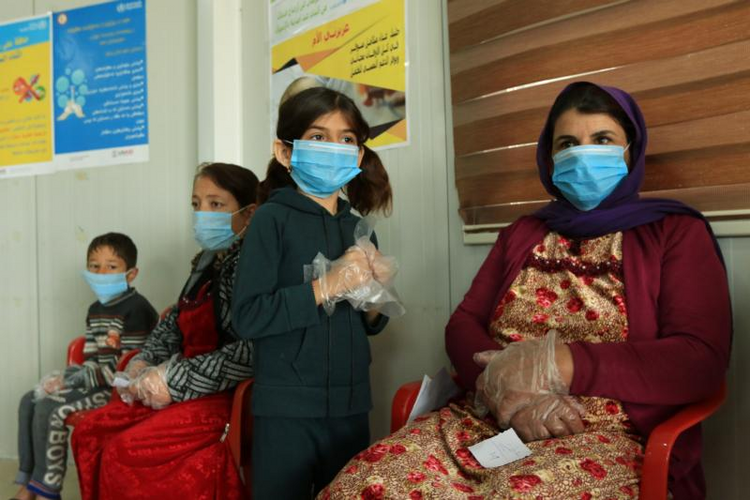 Displaced women and children wearing protective masks wait in the medical center of a camp in Dahuk, Iraq, March 7, 2020, during the COVID-19 pandemic. (CNS photo/Ari Jalal, Reuters)
AMMAN, Jordan (CNS) — A top Catholic humanitarian group expressed concern for the tens of thousands of Iraqis displaced inside their country and dependent on assistance, because access to them has become severely restricted due to COVID-19.

“The government in the northern Kurdish area of Iraq has been very careful and restrictive (with regard to measures to tackle coronavirus), more so than in central or southern Iraq,” said Hani El-Mahdi, Iraq country representative for the U.S. bishops’ Catholic Relief Services. El-Mahdi spoke to CNS by phone from the area’s capital, Irbil.

“But access to people is a challenge,” El-Mahdi said of the current situation as most of Iraq faces lockdown in a bid to stem the spread of COVID-19. Iraq has reported 1,434 cases of the coronavirus as of April 17, but some medical professionals claim the number could be higher.

“Travel between cities and within cities in the first two to three weeks was very restrictive. Now, the government is looking into requests (by aid groups) to access certain areas. But still, most of the nongovernmental organizations and Caritas, whom we work with closely, and others in Irbil, we are all under the same situation — we cannot access the population in these circumstances,” El-Mahdi explained.

[Don’t miss the latest news from the church and the world. Sign up for our daily newsletter.]

“People are stranded more than ever,” he said.

El-Mahdi said nongovernmental organizations and the Kurdish government are considering how to change the way groups like CRS and Caritas can operate under the current constraints, perhaps implementing remote systems and various technologies.

The CRS representative said most of the organization’s work in recent years has been aiding the “returnees,” Iraq’s religious minorities, such as Christians, Yazidis and Shiite Shabak, who were victims of the Islamic State militants’ violent takeover of their towns and villages, both in and outside the Ninevah Plain region from 2014 until 2017.

This has involved aiding about 10,000 people by rehabilitating houses and schools, providing people with livelihood opportunities, educational services and training as well as encouraging ways to reconcile different religious and ethnic communities by tackling issues and building social cohesion among those groups.

CRS also works with the Archdiocese of Irbil to assist those still displaced due to the Islamic State invasion who cannot return to their cities or towns. In the northern city of Dahuk, CRS is helping Yazidis regain educational opportunities and in Zakho, near the Turkish border, it hopes to set up a program establishing livelihood activities.

“The majority of the internally displaced live outside of camps” and in limited measure can access food markets that are functioning, El-Mahdi explained. But restrictions due to the coronavirus mean that no one is permitted to go to offices to work.

“Definitely our travel out of Irbil and Dahuk is very, very limited. Many of our current programs, such as shelter rehabilitation and education, are completely on hold now because schools are closed. Our educational program has been suspended,” he said. “It’s still very limited to where we were in February.”

“Over the past two to three weeks, we have been seriously working with partners trying to restructure many of our program activities, so we can provide some remote assistance, bring cash assistance through mobile money. We are thinking about new ways to help people,” El-Mahdi said.

Meanwhile, humanitarians are expressing concern for the welfare of Syrian refugees and other internally displaced Iraqis still stuck in camps.

Kurdish media reported that Turkish warplanes and drones flew into Iraqi airspace and bombed a refugee camp near Makhmur, some 25 miles south of Irbil, killing three in the camp April 15.

The media outlets said that the incident was not the first time Turkey carried out airstrikes against refugees and in areas where minorities, such as Yazidis, live in northern Iraq. They reported that Turkey claims it is targeting “terrorists,” but has not presented evidence to back the claim.

In another development, the U.N. refugee agency announced April 17 that it is trying to provide cash assistance to some 100,000 vulnerable families in camps for refugees and internally displaced people so they may purchase basic hygiene items to prevent the spread of COVID-19. UNHCR is responsible for the camps, including Basirma refugee camp north of Irbil, where the program has begun. UNHCR said it would also try to reach the families of returnees living in urban areas.

“During these difficult times, we must support those who were forced to flee their homes. Like all of us, they are worried for their families and for themselves, but they don’t have the necessary means to protect themselves. Cash will help them buy basic hygiene items, which is an essential preventive measure,” said Philippa Candler, acting representative of UNHCR in Iraq.

The U.N. children’s agency, UNICEF, said it “will provide 1,800 health care workers with infection-control equipment such as goggles, three-layered masks and gloves, to support Iraq’s health care system.” It added that it is ensuring the continuity of water and wash services in camps for the internally displaced despite the lockdowns.

El-Mahdi said the nongovernmental organizations working inside the camps have been trying to advocate with the U.N. to grant them access to people in the most dire need.

“The U.N. can help these people to a limited extent, but without granting access to the NGOs, who are the service providers to those camps; it is a challenge,” he said.