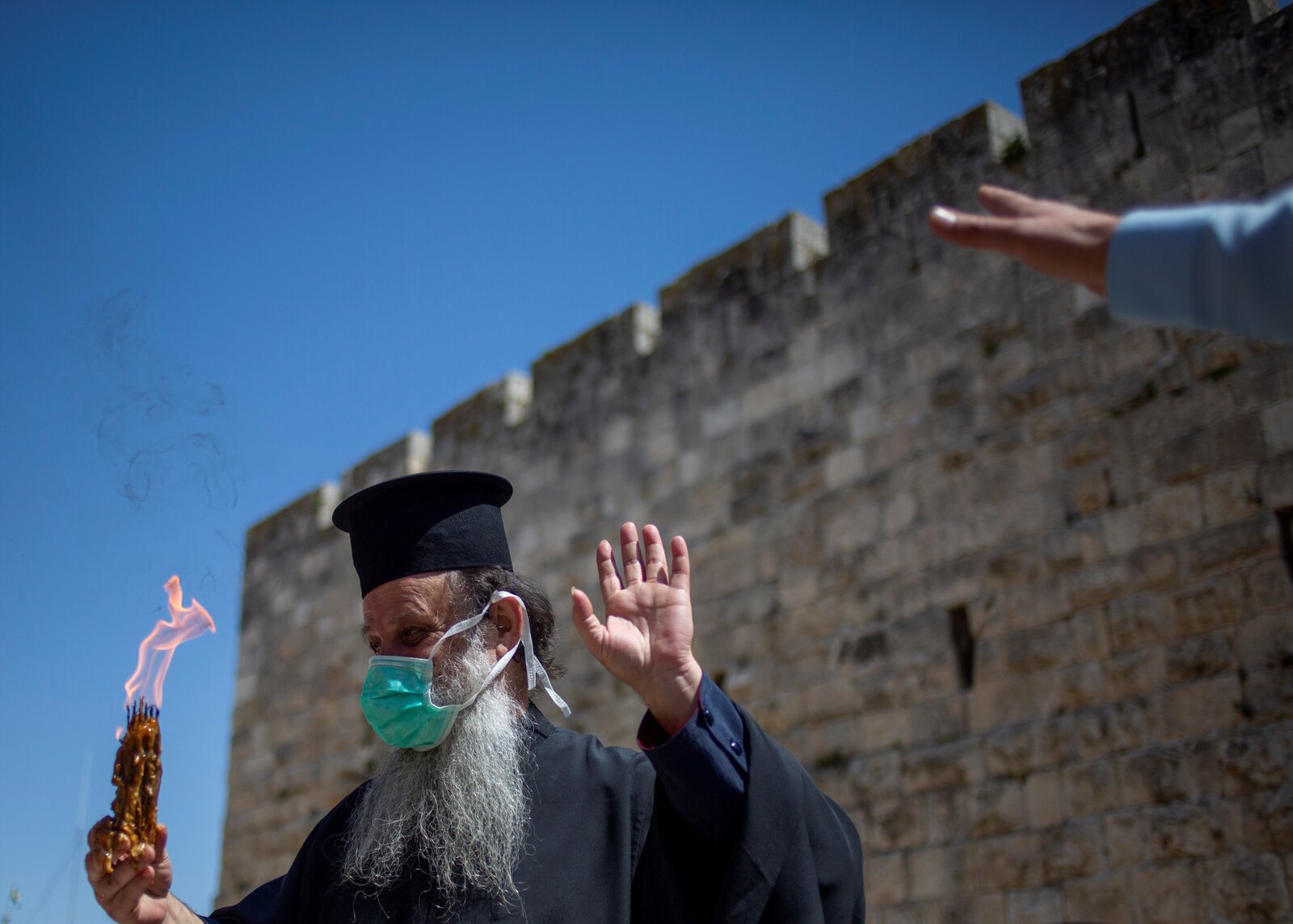 Daniel Estrin
An Orthodox clergyman holds holy fire to transfer to predominantly Orthodox countries from the Church of the Holy Sepulchre, traditionally believed by many Christians to be the site of the crucifixion and burial of Jesus Christ. In Jerusalem’s old city the traditional Holy Fire ceremony was called off amid coronavirus on Saturday.
Ariel Schalit/AP

The coronavirus did not stop the tradition of the Holy Fire on Saturday, the centuries-old ceremony held annually at the tomb of Jesus in Jerusalem the day before Easter on the Eastern Orthodox Christian calendar. But some adjustments were made.

Usually tens of thousands of pilgrims pack the Church of the Holy Sepulchre and surround the Edicule, the inner sanctum that houses the spot where tradition says Jesus was entombed and resurrected.

This year, no pilgrims attended. The church has been closed to visitors since last month, as all houses of worship in the Holy Land have shuttered their doors.

The ceremony was broadcast live to tens of thousands of Orthodox Christian believers around the world. Clergy from Greek Orthodox, Armenian, Coptic and Syriac churches were represented at the ceremony, with a few Israeli policemen standing guard.

A small group of clergy, some wearing masks because of the coronavirus pandemic, stood guard at the Edicule doors, sealed with wax. The Greek Orthodox Patriarch in Jerusalem, Theophilos III, did not wear a mask. He encircled the crypt, wearing a golden crown and vestments, while a lone clergyman chanted.

Then the patriarch removed his golden trappings and entered the tomb. Moments later, he emerged waving lit candles as church bells chimed.

The sudden appearance of the Holy Fire is said to be a miracle, taking place inside the tomb each year at 2 p.m. In normal times, the flame quickly spreads among ecstatic pilgrims carrying candles until the cavernous church fills with light.

Like each year, motorcades drove the flame in small lamps to Orthodox communities in neighboring Jordan, the West Bank, and Gaza.

Because of quarantine restrictions, Akiva Tor of Israel’s foreign ministry said lamps carrying the flame were brought by motorcade to the airport and transferred on the airplane steps with no flight crew disembarking.

In Greece, the Holy Fire was greeted by a bishop and a 15-member band at Athens International Airport, but the flame was not distributed to churches this year as is customary, the Greek daily Kathimerini reported. Greek authorities have banned church gatherings to curb the spread of the coronavirus. The flame was instead kept at the Athens headquarters of the Jerusalem Patriarchate.

Joanna Kakissis contributed to this report from Athens.