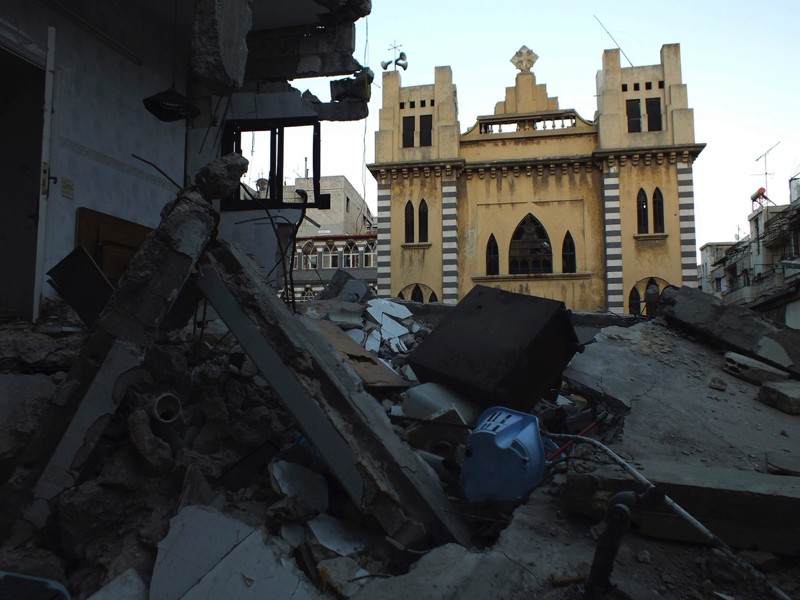 A damaged Syriac Catholic Church is pictured in Homs, Syria, where Christianity is under serious threat.
Photo: CNS/Yazen Homsy, Reuters
The fate of the two missing Archbishops of Aleppo, the Greek Orthodox Boulos Yazigi and the Orthodox Syrian Mar Gregorios Yohanna Ibrahim, both of whom disappeared in April 2013, has been revealed, according to a new report.

The report’s Syrian researcher Mansur Salib says he has found evidence that the two hierarchs were killed in December 2016.

The archdioceses of both bishops have not commented on the accuracy of the report, stating that the condition of the two bishops remains unknown.

This new theory about the fate of Mar Gregorios and Boulos Yazigi contradicts multiple reports concerning the whereabouts of one or both of the Syrian prelates received over the past few years.

Since the two metropolitan bishops disappeared while travelling in the area between the Syrian metropolis and the border with Turkey, no group involved in the Syrian conflict has claimed responsibility for the kidnappings.

In 2017, the leader of Hezbollah, Hassan Nasrallah, revealed that Daesh, or otherwise known as Islamic State, had denied knowledge of the missing Christian leaders in negotiations.

Salib’s investigation hypothesises that on April 22, 2013 the two archbishops had left Aleppo aboard a Toyota pick-up truck, dressed in civilian clothes, with the intention of securing the release of two priests previously kidnapped by anti-Assad jihadist groups.

With the hope of forcing one or both to convert to Islam, jihadist groups captured and held the bishops in eastern Syria and northern Iraq for several years. In December 2016, as areas east of Aleppo were about to be recaptured by the Syrian army, the new report claims that Yazigi and Ibrahim were killed by their captors.

However this latest report, which suggests responsibility for the kidnapping lies ultimately with Turkish intelligence services, is unikely to end speculation over the whereabouts of the two bishops.

The Syrian civil war has had a devastating effect on the country’s Christian population. The charity Aid To The Church In Need estimates well over half the Christian population of the Levantine nation has fled. The Christian community of Aleppo, numbering 150,000 before 2011, has declined by more than 75 percent by to barely 35,000 in spring 2017. The Open Doors 2020 Watchlist placed Syria at number 11 in a list of the world’s most dangerous countries for Christians.