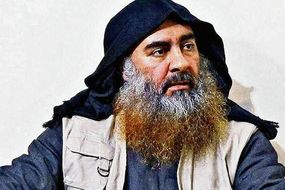 ISIS forced an eight-year-old boy to execute a Christian prisoner in the latest sickening act from the terror group.
By Laura Mowat

The horror images which were released by ISIS’s Amaq news agency showed a child performing an execution, believed to be in the area of Borno Nigeria. The child warned other Christians in the video by saying: “We won’t stop until we take revenge for all the blood that was spilled”. The alarming video was shared online by SITE Intelligence Group, which tracks ISIS

“A child, approx 8, featured in a vid by its Amaq Age executing Nigerian Christian prisoner under its #ISWAP in #Borno. Kid warns Christians”.

This comes after ISIS terrorists are believed to have beheaded 11 Christian hostages on Christmas Day in Nigeria.

The child is shown to perform the killing (Image: SITEINTELLGENCEAGENCY )

There have been an increase in ISIS attacks in Iraq (Image: GETTY )
The video released by the group said: “This message is to the Christians in the world”.

The former US Secretary of State John Kerry has said that ISIS’s “entire world view is based on eliminating those who do not subscribe to its perverse ideology”.

This comes as the founding member of Isis has been confirmed by spies as the organisation’s new leader.

One faction of Nigerian Islamist group Boko Haram broke away in 2016 (Image: GETTY )
Kurdish forces in Iraq have warned of an increase in attacks in the centre and north of the country.

Isis claimed to have launched 106 attacks between 20 and 26 December.

“Their rural networks remain very much intact; after all, Isis members in Iraq still receive monthly salaries and training in remote mountainous areas.

`’That network allows the organisation to endure, even when militarily defeated.”