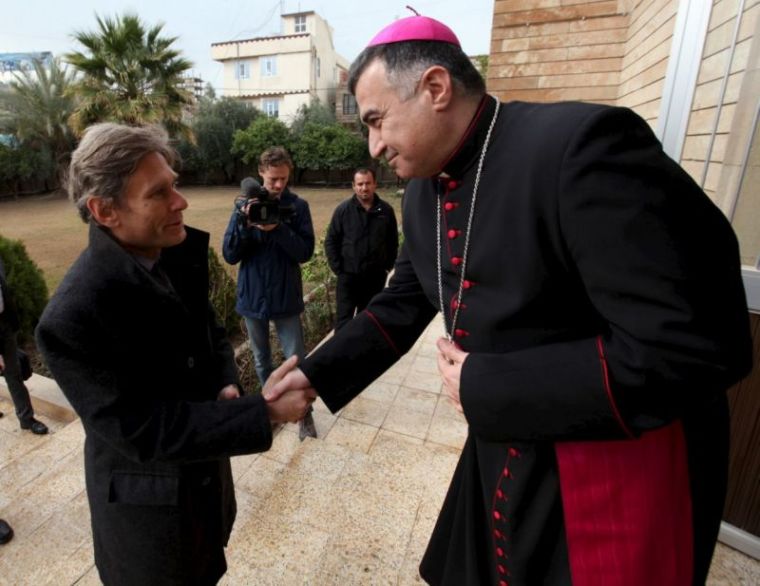 By Samuel Smith, CP Reporter |
U.S. Assistant Secretary of State for Democracy, Human Rights and Labor Tom Malinowski, left, shakes hands with Archbishop Bashar Warda during his visit to the Chaldean Church in Erbil, Iraq. | (Photo: Reuters/Azad Lashkari)
Iraqi Christian groups are responding after grants they were awarded last month from the U.S. Agency for International Development to help restore the Nineveh Plains and strengthen communities victimized by the Islamic State (IS) were criticized by media.

Representatives from the Catholic University in Erbil (affiliated with the Chaldean Catholic Church) and the Shlama Foundation, a small Ankawa-based Christian nonprofit, are defending their organizations’ USAID grants after a lengthy ProPublica article questioned their validity.

The article in question was published Nov. 4 and titled “How Mike Pence’s Office Meddled in Foreign Aid to Reroute Money to Favored Christian Groups.”  Experts cited in the article take issue with the role that Vice President Pence’s office and political appointees played in ensuring USAID funding goes to Iraq-based Christian organizations trying to rebuild their communities.

Through interviews with 40 current and former U.S. officials and aid professionals, the article aimed to “shed new light on the success of Pence and his allies in influencing the government’s long-standing process for awarding foreign aid.” Concern was expressed by “career officials” that USAID could be in violation of the Establishment Clause of the U.S. Constitution for “favoring” Iraqi Christian groups for grants in a predominantly Muslim country.

But some religious freedom advocates say they feel that criticism of USAID funding going to these groups is an attempt to turn America’s bipartisan desire to aid religious minority communities decimated by IS and on the verge of extinction into a “partisan” issue.

“Their conclusion is that the US should not be helping genocide, religious genocide survivors because they are a religious group even though they were targeted for religious reasons.”

New Partnerships Initiative
Among other things, the ProPublica article called into question grants awarded to CUE and Shlama Foundation.

Both CUE and Shlama Foundation were announced last month as part of the first wave of grant recipients for the USAID’s New Partnerships Initiative. A combined total of $4 million was awarded between CUE, the Shlama Foundation and four other local organizations.

The Shlama Foundation will use the grant as it partners with solar companies to conduct solar training for engineers in the Nineveh Plains, who will conduct assessments and oversee the installation of solar systems in 100 homes, solar water pumps for 30 farms and solar street lights in public spaces.

The grant comes as consistent electricity has been a struggle for many across Iraq.

CUE, which was founded in 2015, received $700,000 to provide classes in business language and computer software for widows, victims and former captives of IS.

The ProPublica article reported a concern with the fact that USAID political appointees were involved in the grant approval process for the NPI grants. The article also made mention of the fact that both CUE and Shlama Foundation had no prior experience partnering with USAID.

“NPI is by design a capacity-building tool to help empower responsible local aid providers who do not have prior experience with unique USAID reporting systems,” CUE Vice-Chancellor Stephen Rasche told CP. “The intention is that by empowering local entities that efficiencies can be improved and the enormous overhead costs of US staffers can be reduced.”

The NPI was launched as some organizations and human rights activists became upset with USAID’s grant process that they felt was largely “dysfunctional.”

Before the Trump administration came to power in 2017, USAID funding for Iraq was funneled through the United Nations. But many advocates spoke out about how aid funding that was sent to the U.N. was not making its way to help thousands of displaced Christians.

Archbishop Bashar Warda of Erbil, whose Kurdistan-based archdiocese sheltered and fed thousands upon thousands of displaced Christians afraid they would be persecuted at U.N. displacement camps, was on the forefront of speaking out about how little to no aid was going to help the displaced families his archdiocese was caring for.

However, the ProPublica piece reports that some officials felt that Warda and his allies downplayed the impact that U.N. projects were having on Christian communities in Iraq.

Although the U.N. did fund some projects in predominantly Christian communities, critics contend that the projects the U.N. funded in resettling Christian areas were nothing more than cosmetic in nature and did little to substantially benefit the beleaguered community.

In the predominantly Christian town of Bartella, Shea said, U.N. projects did things like repair a canopy on a municipal building and renovate the “mayor’s building.”

“I’ve been in a meeting where a UN [representative] admitted to fowling up,” one source with knowledge of the situation in Iraq who chose to remain unnamed told CP. “I’ve been in meetings where the U.N. said we simply will not do anything to help these communities because they do a better job than we do.”

In October 2017, Pence announced that President Donald Trump ordered the State Department to enable USAID funding to go directly to faith-based organizations involved in actively supporting Christians and other religious minorities persecuted by the Islamic State.

But in 2018, local Iraqi groups like CUE, the Shlama Foundation and even the Yazidi NGO Yazda had their USAID grant applications rejected. Instead, USAID awarded grants to larger organizations based outside of Iraq that had previously partnered with USAID. Such groups include Catholic Relief Services, Heartland Alliance International and the International Organization for Migration. 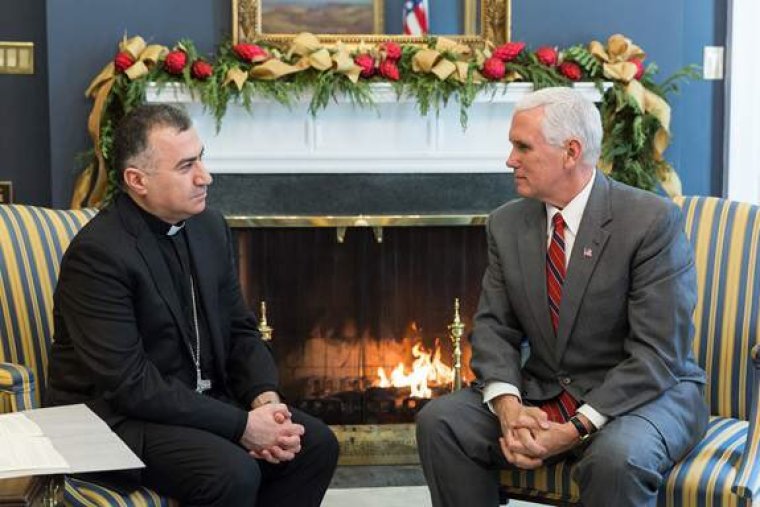 “All of this was directly contrary to the stated policy of the VP and the advertised intention of the [funding],” Rasche, who also serves as Warda’s spokesperson, said. “There was a strong feeling by applicants that the process had been managed in a way which was highly misleading, even dishonest, to the applicants.”

“None of this was published in [ProPublica’s] piece,” Rasche added. “But instead they simply described us as having been previously ‘rejected’, indicating a lack of capability which we think is wholly unfair and not at all reflective of the grossly mismanaged reality of the [USAID] process.”

In July 2018, Warda spoke out again saying that many displaced Iraqi Christians were “worse off now than we were two years ago.”

“We were, again, just frustrated that we had wasted our limited time and resources believing that help might actually come this time,” Rasche explained. “Instead we found ourselves once more as collateral damage in the continuing dysfunction and broken nature of Washington politics, and our disappointment at the time was with USAID as an entity, not any particular person.”

“The only aid that the affected people were aware of was coming from the local organizations,” the Shlama Foundation spokesperson stated. “The recent specialized grant released to support local organizations more directly has increased awareness of USAID among local communities drastically.”

The Shlama Foundation has already completed 185 projects in five years in the area, five recent water restoration projects and one large irrigation expansion to date.

“Shlama has also rebuilt seven homes, six businesses and two road construction projects along with a host of humanitarian efforts throughout the Nineveh Plains,” a Shlama spokesperson stated.

As for CUE, the unnamed source told CP that the university is a “perfectly functional place.”

“It’s worked with the Diocese of Erbil, which I’ve worked with quite closely over the years,” the source said. “And the fact of the matter is that the Church, particularly the Archdiocese of Erbil, ran the entire refugee operation for the Christian refugees [in Kurdistan]. The point is that the church was taking care of people at a higher level than the U.N. was [but on a smaller scale]. And you’re gonna tell me they’re not qualified to run a $700,000 grant?”

Is there an Establishment Clause issue?
Experts cited in the ProPublica article voiced concern that the administration’s focus on providing aid to Christian groups in a predominantly Muslim nation could be a violation of the Establishment Clause of the First Amendment, which prohibits the U.S. from establishing an official religion.

Murad Ismael, head of the Yazidi humanitarian organization Yazda, asserted that the Trump administration is helping Yazidis, another religious minority decimated by IS in Iraq, as much as it is Christians.

“I think this current administration has supported Yazidis, both diplomatically and with aid, more than anybody else,” Ismael told CP.  “We are not Christians and we have been supported. So I think helping the religious minorities who have suffered significantly is really important for American values that people need this help and people appreciate it too.”

Although Yazda has not received an award through the USAID’s NPI initiative, Yazda is a USAID subgrantee receiving funds through IOM and Heartland Alliance. Yazda is using the grant money to support a number of schools and aims to provide grants to launch over 200 small businesses for the Yazidi population in Sinjar.

“The funding in Sinjar mostly comes from USAID and from Germans,” Ismael added. “There are other organizations, of course, that are helping, but USAID and Germany are providing a good amount of funding for Sinjar.”

As a human rights lawyer, Shea doesn’t buy the argument that targeting Christians and other religious minority communities for aid in a predominantly Muslim country violates the Establishment Clause.

“[T]heir entire [Christian] community was being targeted with genocide to be eradicated and was perilously close to eradication,” Shea said. “Between 80 and 90 percent of that community in Iraq is now gone. The Christian community was forced to flee for their lives. This happened since 2003.”

Shea also argues that there is a long tradition in the U.S. of providing aid to persecuted religious minority communities worldwide.

“[T]he U.S. Holocaust Museum itself was paid for by U.S. government funds, which is basically a memorial to the victims of the Jewish Holocaust,” she noted. “Our aid programs, our government funding programs are replete with examples of us helping people who have a religious identity, and who were targeted for religious reasons.”

Shea pointed out that there was much bipartisan support for measures passed by federal lawmakers in recent years that not only called Islamic State’s reign of terror against Christians, Yazidis and other religious groups a “genocide” but also called for the U.S. to provide support to religious minorities persecuted by IS.

“It passed both the House and the Senate unanimously,” the unnamed source with knowledge of the situation in Iraq explained.  “It didn’t lose a vote anywhere. That doesn’t happen in Washington. It has happened on two things: H.Con.Res 75 — this is genocide — and H.R. 390 ?— we should do something about it.”