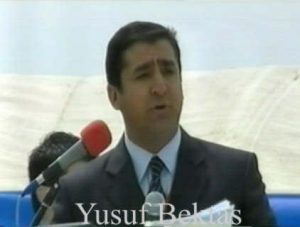 Syriac is an ancient language that takes place within the Semitic language family. This language, which carries the past to the future, has continued its existence by serving as a means of vessel to the meaning and understanding that

constitute “the boundaries of our universe” and has served as an important bridge in intercultural interaction since its beginning and throughout history. Syriac, by its very nature, has its own concepts and flavors of meaning with its rich and multi-meaning vocabulary. The origin of the Syriac meaning/interpretation goes back to the fruitful sources of the deep-rooted culture that has appeared in ancient Bethnahrin (Mesopotamia). In all aspects, Interesting and charming semantic range and interpretation capacity of the Syriac lays down its existence with its stature in all aspects. When Syriac is a matter of in researches, then a person would enter a sweet fatigue marathon and begin to dive into the deep seas and corridors of thought of words. Like in any other language, when it is about studying on the “understanding” and “interpretation” in Syriac, it is not always easy to reach the “root” meaning of concepts. Although since a few Centuries linguists have made admirable studies on Semitic languages in general and Syriac in particular, I think the secrets that are hidden in the depth of this ancient language have not yet been brought to light as it needs to be. Because, it is right there, in the origins of Mesopotamia and in the stratums of ancient wisdom, this very different “system of meaning” about “Life” itself charms us with its colorful revels.

My purpose in this article is; in terms of enlightening the “signification” and “interpretation”, to briefly examine the semiotic and semantic marking and the hermeneutic world of the words “NOSHO/NASHA” and “BARNOSHO/BARNASHA” in Syriac, which mean “HUMAN”, with its philosophical meanings within the linguistic richness. Because in the process of interpretation and conceptualization the very nature of each language shapes that perimeter of meaning. Naming something as an object or subject in a language is based on the meanings attributed to certain and particular concepts. In this way, the relevant “word” can gain meanings revealed by its use, new contexts, fineness, details and hidden meanings in time; it can also have different uses and ways of expression according to the change of social development and change along with the change of time.

That is to say; the only thing that gives a language the integrity of an organic structure is the words and the world of their meaning-value in parallel with their conceptual inner balance. If this “meaning-value universe” had been eroded and had loss in meaning, then it means that this language has lost its creative-constructive and interpreting effect. Because the erosion and loss of its meaning in one language are like a disease. And this causes the conceptual identity of the words either to lose or die completely over time.

The conceptual identity of the words in a language emphasizes the context, the origin of the words, in other words, the spirit of the words. When it comes to the vital-creative power of words, then these matters that we mentioned above on the behalf of words in the language, explain both meaning and value. Because this context, this meaning, this value has very important functions that determine the actions and motivations. The semantic identity of concepts improves mindscapes and by raising the comprehension enhances existing meanings. Even adds new meanings to those words. And this affects the ability of interpretation, the evaluation system of people positively to the utmost. The languishment of interpretation ability is the biggest calamity that could ever happen to a man thus to a language. The conceptual development of a language strengthens the vitality of that language and the socio-cultural formation and raise of comprehension of people who speak that language.

And now, even though the meaning of that concept has been changed over time by use of a familiar word, when it comes to ancient language, this “root meaning”, the authentic richness of meaning that often inspired from the deep historical connection, can be protected even if in the most secluded corners of the language. Although there are controversial assumptions on this issue, the inferences and conclusions based on solid evidences, will continue to enrich the literary horizons. The spirit of concepts which are found in today’s classical Syriac language is so coherent and reconciled with each other, that it is possible to see that that spirit is in close relation and contact with each piece of its life mosaic. Because each word, each noun in Syriac language has very different and sometimes completely opposite usages and details than its semantic origin.

In Syriac following words mean: Nosho/Nasha – Human (n), person Barnosho/Barnasha – Male human (man) Brathnosho/Brathnasha – Female human (woman) Noshoyuthu/Nashayutha – Humanity, mankind Noshutho/Nashutha – Humanity and the human nature Barnoshoyo/Barnashaya – Human (adj), humanistic Barnoshutho/Barnashutha – The human nature. Even though it is not close, we want to correlate the “Anesh” with “Nash” on the basis of root letters from the point of lexicology and etymology. In this verb pattern from this twin-letter (the verb of which the last two letters of root letter are same) verb stem “Nash”, which means to languish, to weaken, to get weak, to become weak, to debilitate, the word Nshosho/Nshasha has been created. In the form of participle of deponent verb of this word, there is a word Nashisho/Nashisha which means “weak, powerless, miserable, sick”.

And from the word Nsho/Nsha of which the letter is “the infirm verb” (see Syriac grammar) that means “to forget, not to remember”, the word Neshyono/Neshyana has been created, which means “forgetfulness, remissness, oblivion”.

It is known from history that the Syriac, which is the extension of Eastern Aramaic, has improved its lexical treasure from the Assyrian, Babylonian and primarily from the Akkadian language. In respect to this, the relation of Syriac with other Semitic languages, such as Hebrew and Arabic, is based on sharing this common lexical treasure. In respect to this, Akkadian language has an important characteristic of basin and stratum for Syriac in terms of etymology. Therefore, Akkadian language establishes the mainstay in researches on Semitic (Syriac, Hebrew, Arabic) languages.

In Akkadian language, ANSHU, ENASHU, ENSHUTU, ENESHU means human and humanity. And this shows us the historical etymological connections, interaction, ancient closeness and deep bond of Akkadian language with Syriac. Because, as it can be understood from the meanings described above, the origin of uses and meanings of the words ANESH, NASH, NOSHO/NASHA extends to the historical roots of the rich lands of Bethnahrin (Mesopotamia), in other words it is hinges on Akkadian language.

In Akkadian language, ENESHU, ENASHU, ENISHTU means “weak, ENSHUTU means “weakness”, ENESHU means “to languish, to get weak, to become weak”. What I am saying is that, as it can be seen from the explanations above, the word “human/nosho” in Syriac and its derivatives, evokes the meanings such as weakness, weak, exhausted in terms semantic meaning to the degree of etymological relationalities that we can establish. I think this description is appropriate to the human nature that feels insufficient and deficient at every stage.

As it is mentioned in resources, because of Turkish language had borrowed many words due to religious literature and liturgic requirements from Arabic that belongs to the Semitic languages and from Persian that belongs to the Indo-European languages after the Islamization process of Turks, even though Turkish language is not in the same family with these languages, it has developed indirect relationship by affinity with Akkadian and Hebrew languages because of words it had borrowed especially from Arabic language. Even to that degree that it is known that even the Turkish word “akraba”, which means relative, has been quoted from Akkadian word “qerebu” and the Arabic word “qâribo”. In respect to this, the relationship between Akkadian and Turkish languages has been largely through Arabic.

If the language is a constructional activity, a civilization, a way of thinking and realization of a human as it is known, then it is necessary to build accordingly a new “area of consciousness” by new awareness. It seems not possible for the mindset that does not see and feel this need, to be successful in the matter of carrying the Syriac to the future.

The point here is that; the word “human” in Akkadian language; our perception will expand more, when the words “ANSHU, ENASHU, ENSHUTU, ENESHU”, which mean weakness and to languish, are comprehended better. Of course, it passes through making the intellectual contribution to the concepts of Nosho/Nasha, Barnosho/Barnasha in Syriac by establishing these relationalities. Contributing to the humanization efforts passes through expanding the range of meanings that the words Barnesh, Burnosho/Burnasha and Barnosho/Barnasha imply and through formulating ideas on them. Then, in order to find solace in life, we must fill the internal pits with subtle data of meanings that exist in a language, so that the external protrusions will be flattened out by the compounds of these meaning and will gain an aesthetic appearance.

And the life will find more meaning!

As it can be seen, the word “human” can be correlated with meaning such as to get weak, to get loose, to become weak, to forget, not to remember, to neglect and oblivion. Besides, isn’t it like that in “life” too? All meanings that exist in Syriac are not against the human nature. On the contrary, it is in accordance with human psychology and physiology. Because, as human beings, we always struggle in weakness and deficiency. When we feel and assimilate it, the desired complementary understanding will add more meaning to our world meaning. When we are fed from this area of consciousness, our comprehension will become more rich. Only then, everything will become more beautiful! Thus, we will embrace and adopt both our culture and life more differently. And we will develop and carry to the future our values more differently.

As it is said, “Each term, each word opens a window to culture.”

P.S.: I would like to express my gratitude and respect to researcher/writer, Dear Malfono Nineb Lamassu, whose Akkadian knowledge I’ve benefited from, and specifically to the faculty member of Mardin-Artuklu University, our dear Malfono, Assoc. Prof. Dr. Mehmet Sait Toprak, for his complementary academical touches and generous linguistic contributions.