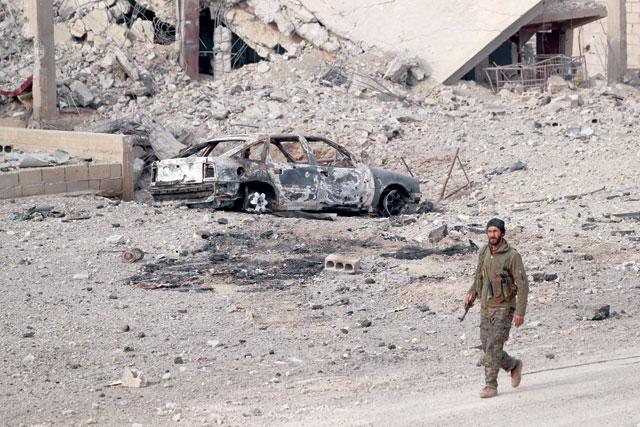 By AFP –
A member of Syria’s Arab Shaytat tribe, who has joined a Kurdish-led alliance fighting Daesh in northern Syria, walks past the debris of a bombed vehicle in the Syrian village of Baghouz, on Sunday (AFP photo)
BAGHUZ, Syria — Near the front line in eastern Syria, Amer Khalifa plays with a sword he found. To “avenge” his family, he has joined a Kurdish-led alliance fighting Daesh.

The 22-year-old is one of numerous members of the Shaytat tribe, who have joined the fight to flush out the terrorists from a shrinking enclave near the Iraqi border.

Backed by US-led coalition air strikes, they have confined the extremists to a final pocket, spanning just 4 sq.km. on the Euphrates River in Deir Ezzor province.

‘‘I want to avenge my brother and my relatives,’’ Khalifa says.

‘‘I will fight to the bitter end of the battle, and then I’ll hunt down their sleeper cells,’’ says the Deir Ezzor native.

Daesh swept across large swathes of Syria and neighbouring Iraq in 2014 and proclaimed a ‘‘caliphate’’ that, at its peak, reached the size of Britain.

As they rampaged across Deir Ezzor, Daesh fighters massacred more than 900 members of the Arab Shaytat tribe.

That summer, Khalifa’s 26-year-old brother, his maternal uncles and a cousin on his father’s side all went missing.

He joined the Kurdish-led Syrian Democratic Forces (SDF) in the neighbouring northeastern province of Hasakeh in late 2016, after escaping his Daesh-controlled home village of Abu Hamam.

But still he has heard nothing of his relatives, nor found their remains in any of the mass graves the Daesh group left in its wake.

In December 2014, one such death pit was discovered, its belly containing the bodies of 230 Shaytat tribe members — but not Khalifa’s brother or relatives.

Daesh has been ousted, from nearly all of its once sprawling proto-state, in multiple offensives by various state and non-state parties, including the SDF, formed with US-led support in 2015.

Of the SDF’s around 30,000 fighters, some 5,000 are from local Sunni Arab tribes. The force also includes Christians and ethnic Turkmen, as well as its core Kurdish fighters.

On the east bank of the Euphrates River, in the village of Baghouz near the front line, Arab fighters have set up posts inside modest one-storey homes.

Among them, Abu Zeid, a fighter in his late 30s, scrutinises the distance to the nearest possible terrorist.

He has a glass eye in his right socket, but his left eye is sharp.

‘‘Watch out, between the trees,’’ he warns journalists.

‘‘They’re on the white dirt road… Look, they’re behind the pillars,’’ says the fighter in uniform, an olive-coloured scarf tied around his head.

He speaks excitedly about the latest developments in battle, and the nearing end of Daesh territorial control.

But when he is asked about what brought him to the front, he becomes silent.

He too lost relatives from the Shaytat tribe after Daesh overran his hometown, but refuses to recount what happened.

After a pause, he says: “Whatever, it’s all so normal. Even my grief has become normal.’’

As soon as they hear gun or artillery fire against the jihadists on the edges of Baghouz, the US-backed fighters scuttle from one terrace to the next to get a better view.

The SDF have whittled away at the last Daesh territory east of the Euphrates in a major offensive launched in September.

The alliance’s commander-in-chief last week said he expected to announce the demise of their ‘‘caliphate’’ within a month, before pursuing remaining sleeper cells.

Daesh has retained a presence in the vast, virtually unpopulated desert to the west, and has claimed several deadly attacks in SDF-held territory in recent weeks.

In a building under construction in Baghouz, Khalifa sits with fellow Shaytat tribesmen around a small fire, heating a blackened kettle to make tea.

Asked about why he is fighting the militants, he echoes the answer of his fellow Arab combatants.