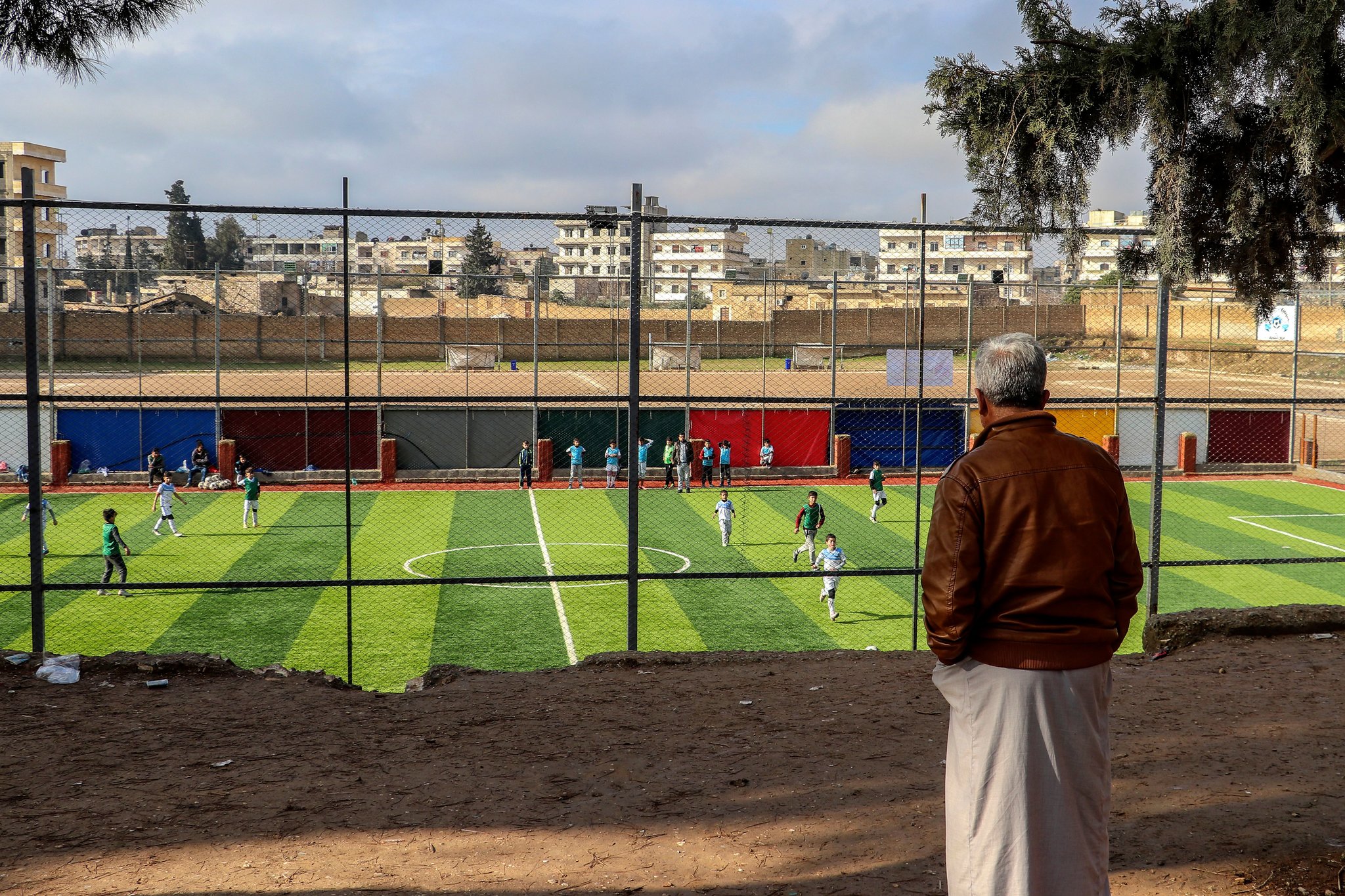 The United States must ensure that a safe zone is guaranteed by international forces and not by Turkey.
By Shervan Derwish
Mr. Derwish is a spokesman for the Manbij Military Council.
A soccer match in Manbij, Syria, which was freed from Islamic State control by Kurdish fighters in 2016.CreditEPA, via Shutterstock
Image

MANBIJ, Syria — Whether the United States and the international coalition against the Islamic State will protect Manbij and areas controlled by the Syrian Democratic Forces in northern Syria from an unknown future is a significant test of their credibility.

I am writing from Manbij, a city of 700,000 people in northern Syria governed by a civilian administration made up of Arabs, Kurds, Turkmen and Circassians. Thanks to the Kurdish fighters who liberated Manbij in 2016, we have been able to enjoy freedoms unimaginable under either the Islamic State or the Syrian government.

In Manbij, where women were once bought and sold as slaves by the Islamic State terrorists, now they run economic cooperatives, serve in the Manbij Military Council and have equal representation in elected councils.

For the first time in Syrian history, we have held free local elections. We have reopened or built several hospitals and 350 schools attended by 120,000 students. We have given 2,000 licenses to factories and flour mills. The physical reconstruction of our city has been slow but steady. Most important, people are living without fear.

Our civilian administration has given people the courage to rebuild their lives and, for the first time, participate in building democracy. We formed the Manbij Military Council, a security force composed primarily of local Arabs, to hunt down terrorists and sleeper cells, fighting to ensure that terrorist groups can never again threaten the people of Syria.

Without international support, none of this might have been possible. Coalition forces fought alongside the women and men of the Syrian Democratic Forces, and coalition jets hit the Islamic State as we battled the group on the ground. Together, we liberated more Syrian territory from the terrorist group than any other force. Statistics show that fewer people around the world have died in terrorist attacks each year since 2015 — something attributable partly to the sacrifices our forces made to eliminate the Islamic State.

The inclusive and democratic political system established across northeast Syria has undoubtedly succeeded in Manbij and it threatens dictators and terrorists who want to see our country divided along religious and ethnic lines.

But we are grappling with a precarious future since President Trump announced his decision to withdraw United States forces from Syria. The American political class might not fully understand it, but these soldiers who served with us do. After Mr. Trump’s announcement, one American officer told us: “I am at a loss for words. I can’t tell you why. I can’t. These are our orders!” Tears streamed down his face.

Though the Islamic State is nearly defeated, we face threats every day from a new enemy: Turkey’s president, Recep Tayyip Erdogan. Mr. Erdogan has repeatedly announced his plans to invade our region, claiming that the Peoples’ Protection Units, or the Y.P.G., have a presence here.

We have repeatedly emphasized that the Y.P.G. has left Manbij and that our forces pose no threat to Turkey’s national security. We believe that Mr. Erdogan fears not the presence or the absence of any given military force but the peaceful and democratic coexistence of Arabs, Kurds, Christians and others in northeastern Syria.

Mr. Erdogan cannot exploit such coexistence. He plans to use the Turkey-backed Islamist opposition in Syria to invade Manbij, just as he used it in the nearby Azaz, Jarabulus and Afrin areas.

While Turkey claims to be returning these territories to their “true owners,” Mr. Erdogan is instead dooming Syrians to foreign occupation and militia rule and making the prospect of peace after eight brutal years of war even more elusive.

Nowhere is this more evident than in Afrin, where Turkey has been accused of enlisting former members of the Islamic State and militias with ties to Al Qaeda to decimate the peaceful region and its autonomous administration. Turkey’s incursion into Afrin in northern Syria displaced around 300,000 people, and the militias backed by Turkey seized, looted and destroyed property of Kurdish civilians.

If the United States allows Turkey to attack Manbij, that will be our fate, too.

Unfortunately, it seems that global powers are still willing to play Turkey’s games. Mr. Erdogan’s “road map” for Manbij does not serve and reflect the interests of its people. He also proposes the establishment of a “safe zone” in the wake of an American withdrawal, a plan that Mr. Trump appears to have, in some form, agreed to.

We are not opposed to the concept of a safe zone. We believe that it is possible for the United States to withdraw its forces from our region without abandoning our people. However, we will not accept any Turkish incursion into the areas we have liberated, no matter the words used to describe it.

Any “safe zone” in northeast Syria must be guaranteed by international forces and not by the Turkish troops and jihadist militias massing at our borders. An international safe zone would ensure that Turkey’s borders are protected, without subjecting the people of northeast Syria to the mercy of Mr. Erdogan’s proxies. It would also facilitate the continuing reconstruction efforts taking place in our region, which are key to peace and stability.

Get our weekly newsletter and never miss an Op-Doc

Watch Oscar-nominated short documentaries from around the world made for you.

And the United States and other members of the coalition must support efforts for a negotiated settlement to the Syrian conflict and ensure that our administration is represented in those talks. Since the beginning of the war, we have fought to build a stable and equal future for all Syrians.

Together with the coalition, we won historic battles in Kobani and Raqqa. Now that the war is coming to an end, we believe that the international forces that fought with our people must play their moral role in securing our dignity, safety and our vision for Syria’s future.

In Manbij, where the Islamic State once planned attacks against the West, children now grow up in a world free from fear. The world has a responsibility to ensure that their future continues to be safe, secure and peaceful. We ask our partners to rise to the occasion for this last moral task.

Shervan Derwish is a spokesman for the Manbij Military Council.