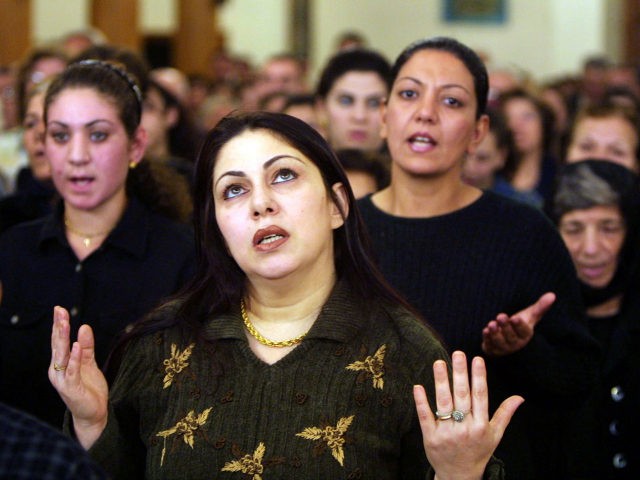 Iraqi Christians pray in a church, as all Christian denominations in Iraq prayed to prevent war on Iraq November 22, 2002 in Baghdad, Iraq. NATO members have declared themselves united in backing U.N. efforts to rid Iraq of weapons of mass destruction, but the 19-nation defense alliance stopped short of …
Salah Malkawi/Getty Images

The archbishop of Erbil, Iraq, thanked President Donald Trump this week for his administration’s support for persecuted Christians in the Middle East.

Last June, Vice President Mike Pence promised funding for Christians who have suffered ongoing persecution in the country, and last week Hungary and the United States announced an alliance to assist Christians in the Middle East to “recover from genocide and persecution by the Islamic State.”

The government of Hungary and the U.S. Agency for International Development (USAID) signed a Memorandum of Understanding (MOU) on December 18 “to increase coordination to help communities in the Middle East recover from genocide and persecution by the Islamic State of Iraq and Syria (ISIS).”

The agreement between the two nations follows Hungary’s declared strategy of taking assistance “to the troubled spots where it’s needed, instead of bringing the trouble and instability to Europe.”

According to Archbishop Warda, the financial assistance is a welcome Christmas present.

“We now have people on the ground from USAID to follow up with the churches and everyone affected by the ISIS genocide,” he said.

The funding is currently being used to rebuild schools but USAID will soon be announcing other projects as well, since Islamic State militants destroyed numerous dwellings as well as basic infrastructure.

“These are tangible results,” Warda said. “We’re seeing it more than before.”

Persecuted Iraqi Christians have long been “forgotten” by the world, and when they see concrete examples of support and solidarity, “it affects them,” the archbishop said.

“Our people need a big ally, someone to tell them you’re not forgotten and we’re watching closely what’s happening on the ground. They need a friend to support them, and we’re starting to see that now,” Warda said.

During the encounter, Mr. Salih extended an invitation to Pope Francis to visit the Iraqi city of Ur, the Biblical birthplace of Abraham, for an interreligious summit in 2019.

Although the Vatican has not yet commented on whether the pope intends to accept the invitation, observers suggest that this is exactly the sort of event that attracts Francis.

In a statement released by the Iraqi president’s office, the two leaders discussed the situation of Christians in Iraq, and spoke “a great deal” about how to help Christians remain in the country, which will require rebuilding homes, businesses, schools, and churches.

Cardinal Parolin celebrated Mass Friday in the Altahera Syro-Catholic Cathedral in Qaraqosh, which was overtaken by the Islamic State in 2014.

In his homily, the cardinal praised those who stood strong during the persecution.

“In God’s saving plan, your sacrifices will not be without fruit, as fruitful as the witness of so many martyrs who, from the first centuries of Christianity, bathed this land with their blood and lived their faith heroically to the end,” he said.

Last Friday, Pope Francis underscored the sufferings of persecuted Christians around the world and said that the Church is living in a new era of martyrdom.

We are experiencing “a new age of martyrs,” the pope told members of the Roman Curia in his yearly Christmas address to them. “It seems that the cruel and vicious persecution of the Roman Empire has not yet ended.”