Iraq’s capital is throwing itself into the spirit of Christmas, with shops and restaurants festooned with decorations, trees and effigies of Santa Claus
A woman walks past a store selling Christmas decorations in Baghdad, Iraq (Reuters)
Tom Westcott’s picture

BAGHDAD – Baghdad residents are approaching Christmas with an enthusiasm that defies increasingly outdated international perceptions of Iraq as a perpetually war-torn country often at the mercy of armed groups.

Across the capital, many hotels, cafes and restaurants have trees and decorations, mostly featuring images of Father Christmas rather than Nativity scenes, with such Christian symbolism largely confined to churches.

This year is special, and we’re celebrating in a bigger and wider way, ringing the church bells and singing

“We haven’t had any threats or problems this year, and the situation for us is nice and stable,” said a nun in the Dominican Convent in Baghdad’s Karrada district who preferred not to give her name.

Standing beside an illuminated Nativity scene and richly decorated Christmas tree in Baghdad’s Christ the King Church, she told Middle East Eye that Iraq’s Christians have previously tempered their celebrations, as the holiday has sometimes coincided with the Islamic month of Muharram, when many Muslims mourn the killing of the Prophet’s grandson, Imam Hussein.

“We respect Muslims’ sadness at this time,” she said.

This Christmas the two do not overlap, however, and security in the Iraqi capital is at a recent high, “so this year is special, and we’re celebrating in a bigger and wider way, ringing the church bells and singing”. 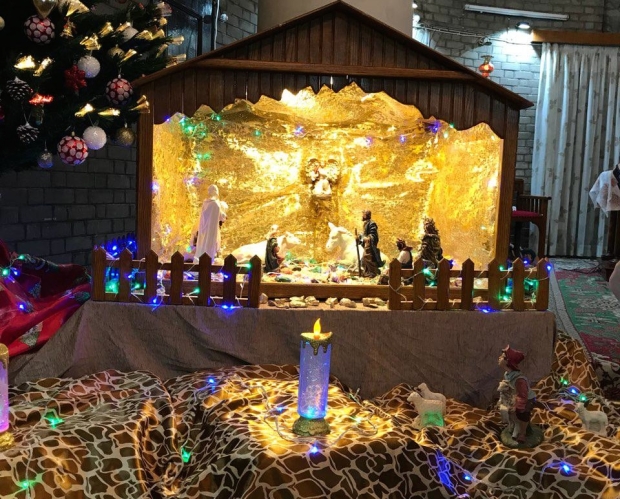 The nuns here play an important role in the local community, running a school and supporting a nearby hospital.

“There is no problem between Christians and Muslims in Baghdad. We love them, we work with them and we live with them in solidarity,” the sister said. “And all the children here are very excited about Christmas.”

But, despite this positive portrayal, she sadly admitted church attendance had shrunk by 90 percent over the past decade and a half, a consequence of years of instability and economic decline. According to the nun, Baghdad’s Christian community has also continued to diminish year by year.

“My extended family in Iraq used to be almost 100 people, but now we’re only 10, and it saddens me that most of my relatives no longer live here,” she said.

According to Iraq’s last official census, in 2003 there were 1.5 million Christians (comprising around six percent of the country’s 26 million population), but years of sectarian-fuelled violence following the US-led 2003 intervention have seen numbers diminish to an estimated 250,000.

A senior church leader in Baghdad, speaking on condition of anonymity, told MEE this figure was a generous estimate. He believes the actual number is considerably smaller, especially after the 2014 rise of the Islamic State group (IS) in northern Iraq – formerly home to the majority of Iraq’s Christians – which prompted many to seek asylum in Europe, Canada or Australia.

With Iraq’s ever-dwindling Christian minority now accounting for less than one percent of the country’s population, in Baghdad far more Muslims are marking Christmas, however modestly or non-religiously, than actual Christians.

“As Muslims, we believe in Jesus, and there is a whole chapter in the Quran about him and his mother. We love Jesus and his mother Mary,” university professor Suad Hussein, 46, told MEE.

“Muslims have to respect all the prophets, but we should celebrate Christmas in a modest and moderate way, not making lots of noise and disruption with car horns and blaring music.”

Hussein bakes popular Iraqi deserts, especially kletcha (date-filled pasties), to distribute to friends and neighbours over Christmas and New Year. “A Christian family lives nearby, and we see them go to church very early on Christmas Day and then, later, we congratulate them on their festival and take them kletcha,” she said.

Manager of Baghdad’s Sama al-Bait Mall, Ammar Riad, 47, told MEE: “Christmas is a celebration of our Christian brothers, and we are celebrating with them because it’s the birthday of a prophet.” He insisted Iraq’s Muslims and Christians were united, sharing both their happiness and sadness, and were not divided by religion. 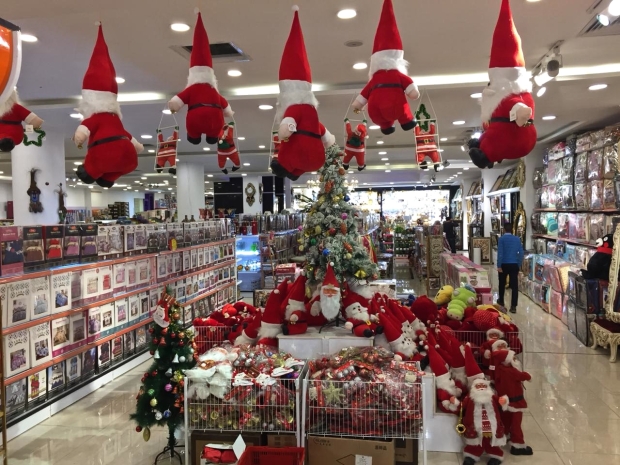 “The situation in Baghdad is fine now, and we’re trying to rebuild trust with each other and forget about all our suffering,” he said. “And we really hope our Christian brothers who fled the country will return to Iraq and live here again as they did in the past.”

It is an optimistic outlook. Many Iraqis profess a desire to leave the country, especially minority Christians and Yazidis in northern Iraq, whose homes and communities were torn apart by IS and who now live in fear of yet another wave of persecution.

“I really love every aspect of Christmas. It’s more fun than our Eid celebrations, and we really enjoy it here in Iraq,” enthused English student Zeineb Mohammed, 19. “The only thing we don’t have here in Baghdad is the snow.”

Even many from religiously conservative Muslim backgrounds, who prefer to observe the festivities from a distance, enjoy the atmosphere.

“I love the colours of Christmas, and I think the decorations and Christmas spirit change people’s mood,” said US embassy employee Wassan Arif, 42.

“If I lived alone, I’d have a tree at home, but I can’t because I live with my family and they have their own religious beliefs. But my brother lets his wife put up a tree because she really loves Christmas.”

The spirit of Christmas is nice, and for the last two years it’s been great to be able to enjoy some family time without any violence or bad things happening in Baghdad

Several young people not marking Christmas at home said they still enjoyed the feeling of participating in a worldwide celebration by sharing festive images on social media.

A common misunderstanding that Christmas is synonymous with New Year’s Eve further fuels the festive spirit, as many people do not realise that much seasonal imagery holds Christian meaning.

“Christmas is a dual celebration. For Christians it’s about the birth of Jesus and for us it’s the start of a new year,” said Mariam Abdul Mohsen, 27, a Muslim sales assistant in one of Baghdad’s many cosmetics shops.

Abdullah Saffa, 27, working in a nearby clothing store, admitted many Iraqis did not fully understand Christmas.

“It’s just another day, really, and Iraqis don’t know how to celebrate it properly,” he said. “But the spirit of Christmas is nice, and for the last two years it’s been great to be able to enjoy some family time without any violence or bad things happening in Baghdad.” 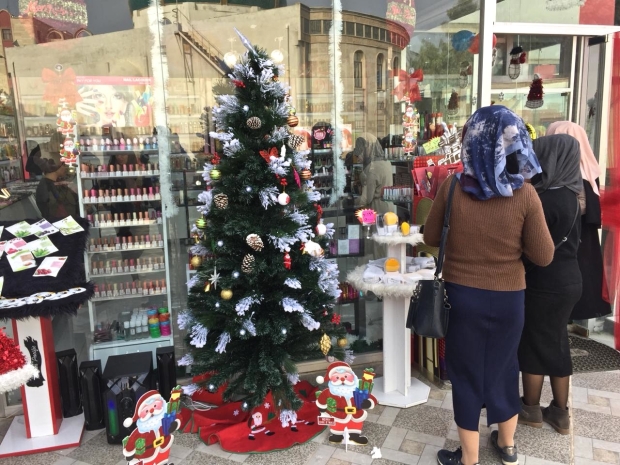 A mosque is reflected in the window of the cosmetics shop, outside which stands a decorated Chrstmas tree (MEE/AbdelHakam Ziyad)

Indeed, Baghdad in 2018 is a far cry from the dangerous city seen in recent years, particularly the years following the 2003 invasion, which inspired American garage-rock band Black Lips to pen the 2007 song Christmas in Baghdad.

Written from the perspective of a US soldier fighting in Iraq, the opening lines are: “Christmas in Baghdad can be such a drag, I don’t want to come home in a body bag.”

In Baghdad, as in much of Iraq, general safety and security is better than it has been for over a decade.

Some of the concrete bollards designed to prevent suicide attacks and the city’s many checkpoints are gradually being dismantled, and in December Prime Minister Abdil Abdul-Mahdi partially reopened Baghdad’s ultra-secure, fortified Green Zone to the public.

Many Baghdad residents largely credit the city’s Christmas-decorated streets to such general improvements to security following Iraq’s defeat of IS, and several noted that there were more decorations this year than ever before.

“I come from a very traditional Muslim family, so Christmas wasn’t part of the important years of my life,” said primary school assistant head Zeineb al-Adhami, 29. “But now I see Baghdad is celebrating, and this makes my heart overflow with joy.”