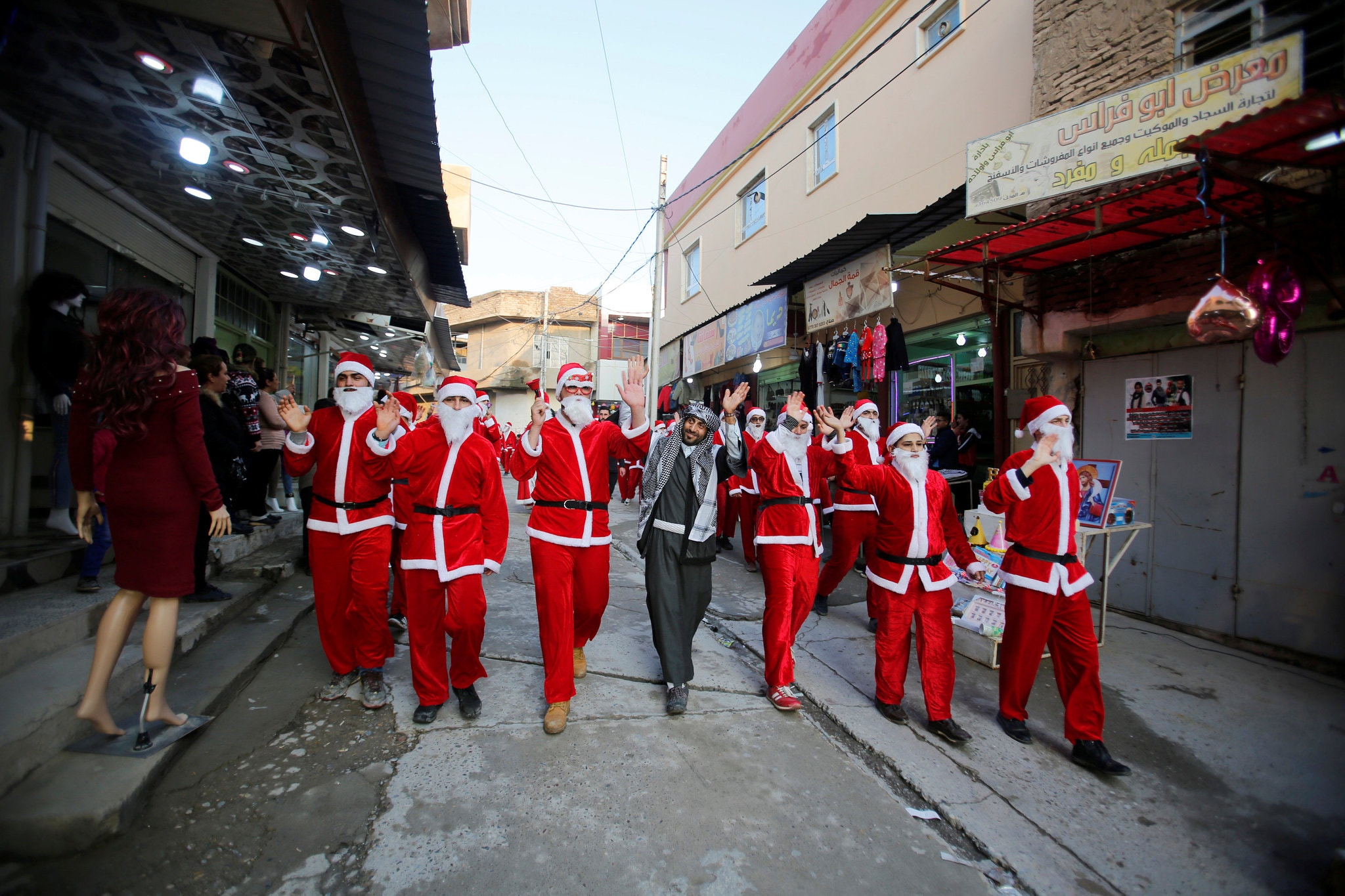 Wearing Santa outfits in the streets of Hamdaniya, Iraq, on Friday.CreditCreditKhalid Al-Mousily/Reuters
By Rod Nordland
Never mind who’s being naughty or nice, Santa Claus himself supposedly has had bigger problems in Iraq and Syria, where he either did or did not get arrested in the run-up to his big night this year.

Various accounts widely shared in local social media during the weekend before Christmas had Papa Noel, as Christians in Iraq and Syria call him, being arrested by the Iraqi police, drafted into the Syrian army or going off to fight the Islamic State.

The reports grew so widespread that the police in Iraq, a country where sectarian divisions often lead to bloodshed, took pains to publicly deny them.

“A group of sarcastic posts spread talk of the arrest of Papa Noel with a picture written on it, ‘Karbala police arrest Papa Noel,’ and this picture spread on social network sites,” said Col. Alaa Al-Ghanimi, the spokesman for the police in Karbala, the Shiite holy city in central Iraq. “The police command absolutely deny this news and there is no such arrest.”

Colonel Ghanimi said the photo had actually been taken not in Iraq but in Syria, and the police in the picture with the Santa were actually helping him distribute presents to children, using a police Toyota pickup truck instead of the customary reindeer-powered vehicle.

Iraq has a significant Christian minority, although many of them have fled the country in recent years, attacked in some places by Shiites and in others by Sunni extremists like the Islamic State. In 2010, attacks on Iraqi Christian churches were so serious that many canceled the traditional Christmas Eve services for fear of bombing, but recently those fears have eased.

As the offending photographs — some showing two Santas in custody, and wearing oddly short black beards rather than white ones — were more and more widely shared, the locations changed to various cities in Iraq. Posts claimed that the arrest had taken place in Karabala, Najaf, Hamdaniya or even in distant Sulaimaniya, a Kurdish area.

“Can anybody tell the truth about it?” asked one Twitter poster, Ali Y Al-Baroodi.

The police spokesman from Karbala warned people that citing unfounded claims and stirring up sectarian sentiments was dangerous.

“The Holy Karbala Police Command calls on the necessity of checking the news with official sources to prevent posting such rumors, deliberately or not,” Colonel Ghanimi said. “They should report true news and not be dragged along behind the lying news.”

The opposition Syria Untold website jumped into the fray, showing a cartoon of a Santa figure being hanged and tortured by a Syrian government goon. “Papa Noel detained while distributing gifts in Syria,” a caption with the cartoon read.

Most of the social media shares, however, appeared more lighthearted fun than Russian-style attempts at spreading disinformation.

“To Hajin!” one Syrian account said, showing two Santas allegedly riding off with the Syrian army. Hajin is the last territorial holdout of the Islamic State in Syria.

Outside war-torn Iraq and Syria, recent news of Santas behaving badly was more grounded in reality.

In Orlando, Fla., the police did arrest a Santa impersonator, Robert Kendel, 48, who they said had advertised on Craig’s List for work as “Santa Bob,” using a photograph of himself with a child in his lap, without disclosing that he was a registered sex offender. His wife told a local news organization that he had been working as a Santa for years, despite his 1990s arrest and conviction for sexual battery of a young girl.

In Odessa, Ukraine, two bad Santas got into a furious fist fight in front of children at a shopping area; apparently it was over a turf dispute. One of the Grandfather Frosts (as the Ukrainians call Santa) was much younger than the other, but the older Frosty was reportedly a martial arts enthusiast. (Video of the brawl was unconvincing on that point).

A similar outrage took place this month in St. Ives, in the genteel and normally peaceful countryside of Cambridgeshire, England. A Father Christmas in a shopping mall stormed out of his grotto, ripped off his beard and began yelling and swearing at a large group of children.

Parents said he had told the children, who were making too much noise for Father Christmas to be heard, to get out, punctuating the command with obscenities, according to a report in The Guardian newspaper. The police said the incident was under investigation.

In Iraq, social media alarmism to the contrary, many Christians said that 2018 was better than a lot of Christmases past, thanks to improved security.

“I love Christmas,” said Fadi Hana, 25, a college student in Baghdad. “I went shopping yesterday, and this year I saw some people wearing Papa Noel costumes and standing in front of shops playing with children and saying hi to everyone.”

“I heard those reports about police arresting people in Santa suits, but I didn’t believe it,” she said. “Such a thing never did and never could happen.”