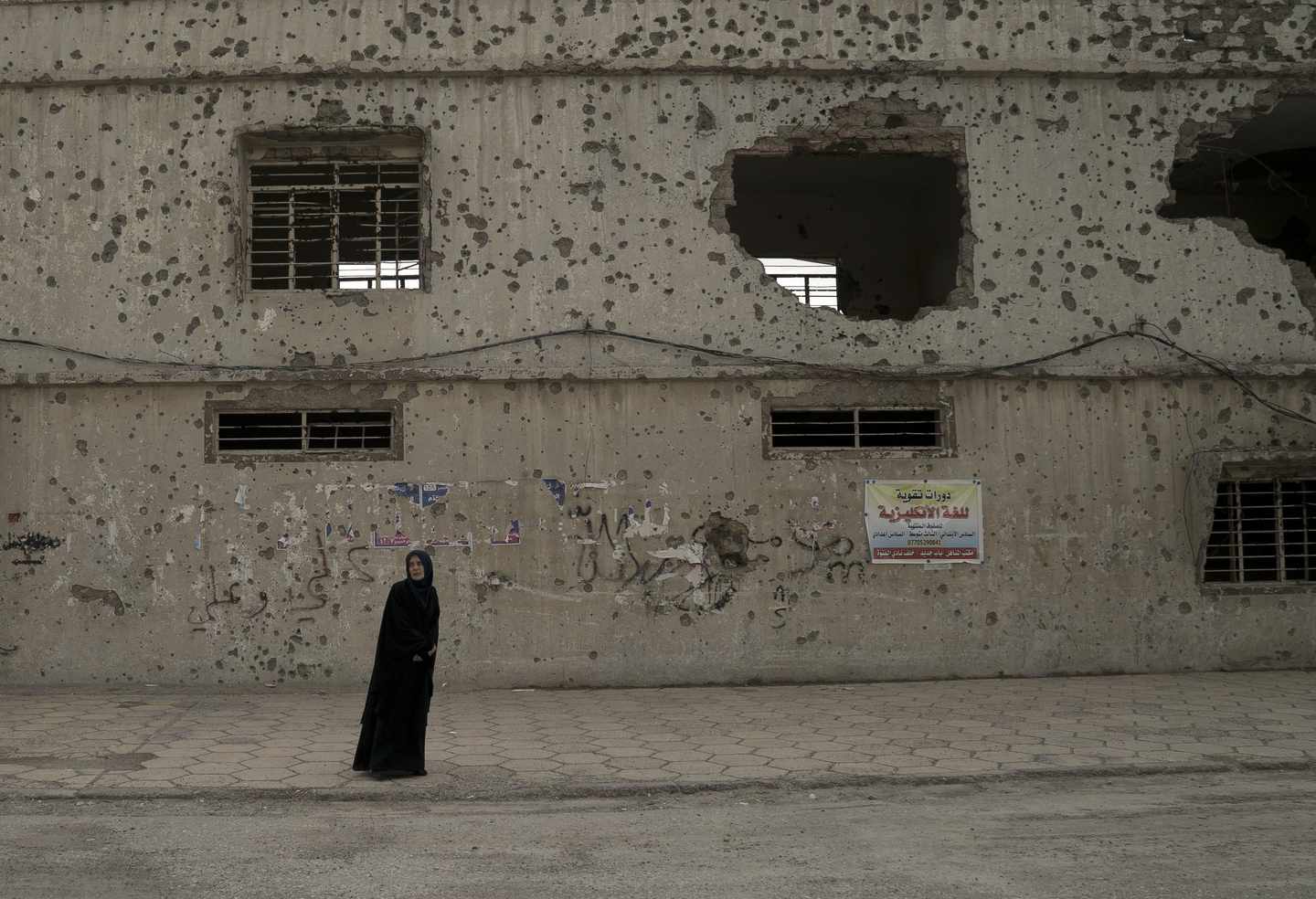 By Benedict Kiely
AP Photo/Maya Alleruzzo
In March of 2017, with the battle for control of Mosul, Iraq’s second largest city, raging just miles away, I was driven into the town of Karamles, recently liberated from ISIS control. Together with a journalist friend, the parish priest of the town and an American adviser to the Catholic Archdiocese of Erbil, we walked among the ruined buildings surveying the results of ISIS occupation, which included a burnt church.

Virtually none of the former inhabitants had yet returned. There was nothing in the way of functioning infrastructure — no water or electricity — and many of the buildings were still booby-trapped with IEDs. The parish priest’s own house, intact because it had been used as an ISIS base, also had a bomb left inside it, which was discovered and disarmed when he returned.

Before ISIS, Karamles had some 10,000 residents, most of them Christians. Father Thabet Habib, the enthusiastic pastor, was determined that they should return and that the town would rebuild and thrive. As we left, the U.S. adviser told me to turn and look at the large metal structure that formed an official entrance to the town. Three flags flew from it. One was the flag of the Iraqi army, the second was that of the local Christian militia, the NPU. But it was the third banner that he wanted me to notice: the flag of Ali, the fourth Caliph of Islam, revered by Shia Muslims, and the official emblem of one of the Shia “Popular Mobilization Units.”

Why, he asked, was that flag flying as there were virtually no Shabak, the ethnic Shia population, living in this Christian town. Fr. Thabet interpreted its ominous significance: “The next attack on Christians,” he said, “will come from the Shabak.”

I returned to Karamles this past May, and much of Fr. Thabet’s positive dream is coming true. Due in great part to the generous help of the U.S.- based Knights of Columbus, the town is coming back to life, with houses and infrastructure being restored and families moving back. Many challenges remain, however, principally the need for jobs and security. At the entrance to the town is the ancient monastery of St. Barbara, desecrated and used as an ISIS base, complete with large tunnels. It has been restored and celebrations have resumed.

So far, the issue with the Shabak in Karamles has stayed relatively calm. But not so in the town of Bartella, liberated from ISIS in October 2016. It had a pre-ISIS population of 30,000 people, the majority of whom were Syriac Christians.

I have known the pastor of Bartella, Fr. Behnam Benoka, since I first visited Iraq in early 2015, when all of the Christians of the Nineveh Plain, some 120,000 people, had been driven out by ISIS. Fr. Benoka was then running a medical clinic in one of the largest refugee camps in Erbil, dealing with families traumatized after having fled their towns and villages with only the clothes on their backs. Fr. Benoka, widely regarded as one of the most able and effective Christian leaders in Iraq — he speaks multiple languages, including excellent English — was the priest telephoned by Pope Francis in December 2014 to share his concern for all the persecuted Christians terrorized by the Islamist terrorists.

In May of this year, I walked through the Old City of Mosul, perhaps the first Western priest to ever do so, accompanied by armed Iraqi police. Much of the Old City was still dangerous, with IEDs that had yet to be cleared and, sadly, many unrecovered bodies. However, driving into the town of Bartella, I felt a much greater sense of oppression than I’d felt in Mosul just hours before. Those in the town have a feeling of being surrounded. Meeting with Fr. Benoka in his parish, he confirmed my feelings.

Bartella, a Christian town for centuries, was controlled by the Shabak militia’s “Brigade 30,” one of the Hashd al-Shaabi PMU forces backed and resourced by Iran. Fifteen years ago, U.S. military forces assisted in settling some 2,000 Shabak families from Mosul and placed them in and around Bartella. That was already a considerable change to the demography, but after the entire Christian population fled from ISIS in 2014, it could be argued that Bartella’s fate was sealed.

Last week I spoke with Fr. Benoka for over 40 minutes on FaceTime. A few weeks ago, the Shabak militia blocked the road to his church, preventing his congregation from attending. They also strafed the church with gunfire. Fr. Benoka told me that this was the second time his church had been attacked in the last nine months. One of the militiamen held a handgun to the priest’s face when he went out to demand that they clear the street and stop shooting.

Later, in a provocation unreported in any media, the same hostile militia went to Qaraqosh, the largest Christian town on the Nineveh Plain, and menaced the people living there. Fr. Benoka told me that the Shabak want to drive the Christians from the area. “They are the new ISIS,” he told me. “We are really vulnerable.”

The Iraqi army controls the entire Nineveh Plain, at least in theory, but it has failed to intervene. This is unsurprising since the PMU militias were legalized by the Iraqi parliament in 2016 and are, effectively, an army within the army. It is also important to note that Kurdish forces, the Peshmerga, are not allowed to enter much of the territory of the Al-Hamdinya District, which critically includes Qaraqosh, thus leaving the Hashd al-Shaabi in effective control.

Since the removal of ISIS control of the Nineveh Plain (“defeat” is perhaps an unwise word as ISIS attacks are continuing on an almost weekly basis), the area — which has had a Christian population since the time of the Apostles — is now described as “the disputed territories.”

Although never ethnically Kurdish, the Kurds are making claims to the land, as are the Shabak and, of course, the central government in Baghdad. In the middle, with no support, no protection, and no influence, is the Christian population.

On Dec. 11, President Trump signed the Iraq and Syria Genocide and Relief Accountability Act of 2018, the long-promised legislation authorizing U.S. aid to communities being targeted with genocide or war crimes. Already, assistance is beginning to arrive, helping rebuild towns destroyed by ISIS. Another positive development is the presence of Max Primorac, USAID special representative for minority assistance, who is on the ground in Erbil. Primorac is highly regarded locally as someone who is deeply committed to helping religious minorities under threat in the region.

There is much to applaud and commend about the new proactive polices of the Trump administration, especially in contrast to the frustrating indifference of the Obama administration. Yet, a real and present threat remains in spite of the rebuilding efforts. Unless the security situation is addressed, which means powerful U.S. pressure applied to the Iraqi government to stop the ethnic cleansing of Christians by the Shabak and Shia militias, Fr. Thabet’s ominous words in Karamles will come true: “The next attack on Christians will come from the Shabak.”

Fr. Benedict Kiely is the founder of Nasarean.org, a charity helping the persecuted Christians of the Middle East.