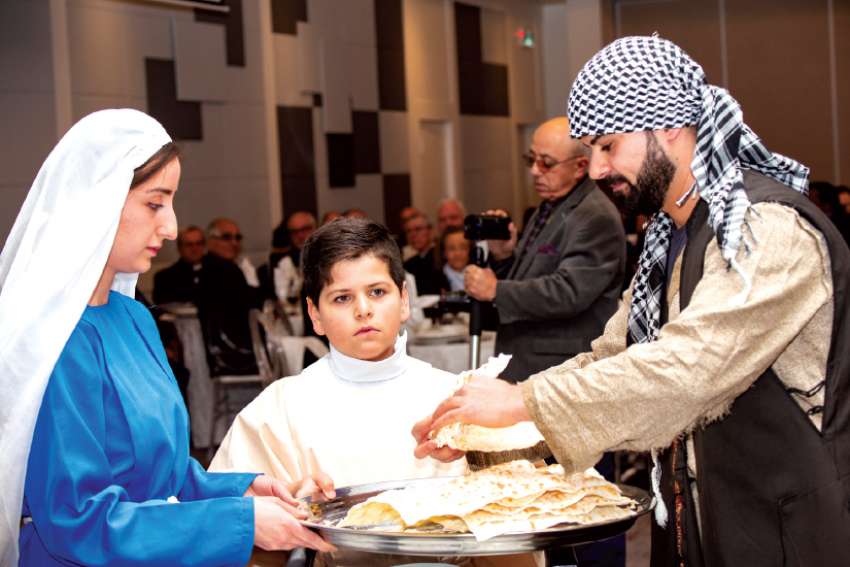 In the traditional dress of Iraq’s indigenous Chaldeans, Anta Alantwan, Antonues Polo and Suhel Bawood distributed bread and salt to begin the 2018 Christians in the Middle East Benefit Dinner, this year focussing on Iraq. Photo by Michael Swan
By Michael Swan, The Catholic Register
Leading by example is rarely easy but neither is it a grim, joyless task — at least not for Canada’s Chaldean Bishop Bawai Soro.
Soro took the mike at the annual Christians In The Middle East Benefit Dinner Nov. 17 and, with a twinkle in his eye and grin across his face, pledged an entire month of his own salary to support the work of the Catholic Near East Welfare Association of Canada.

Then he told the audience of about 300 who had gathered at a banquet hall near Pearson International Airport they could easily discover just how much their bishop is paid by calling CNEWA and pledging at least $100. Every $100 pledge comes with full financial disclosure to those who request it.

Soro’s mischievous pledge drew laughter and applause on a night dedicated to the hundreds of thousands of Iraqi Christians who have been forced out of their homes since the American-led invasion of Iraq in 2003 and the rise of the Islamic State in 2014.

“Faith is needed when nothing else works,” said Soro as he went on to describe a modern Iraqi society where nothing works as it should.

The exodus of Christians from the country evangelized by the Apostle Thomas has reduced Christians, once the majority, to just one-quarter of one per cent of Iraq’s population, Soro said.

“That is how much we have suffered,” he said.

As the Indigenous people of Iraq, whose claim on the country pre-dates the rise of the Arab-Muslim empires in the seventh century, the Chaldeans still have important contributions to make to a new, peaceful Iraq, said Soro. Dialogue with Muslim Iraqis will be the key to not just Christian survival but to a better country, he said.

“The thought of the Middle East emptying out of Christians is just horrible,” Cardinal Thomas Collins told an audience evenly divided between Roman and Chaldean Catholics. “Nobody should ever have to flee their homeland.”

“If nothing is done, there will be no Christians in the Middle East anymore,” said CNEWA executive director Carl Hétu.

In addition to sponsoring the fundraising dinner — this year focussing on CNEWA’s work in Iraq — the Catholic Near East Welfare Association was promoting its Christmas appeal which highlights the plight of Christian refugees both inside Iraq and in the surrounding countries. From post-traumatic counselling to basic shelter and medical aid, CNEWA’s work with refugees is all delivered by parishes, religious orders and volunteers under the supervision of the local bishop, Hétu said.

“When we go into Iraq, into Syria, into Palestine and Israel, all the work we do is with the Church,” he said. “Most of the services they offer are for the Muslims, for the Hindus, for the Jews. What does that do? It brings people together.”

Interfaith dialogue and work for justice helps to build societies where Christians can flourish and contribute, Hétu said.

The dinner expected to raise $20,000 that will go toward CNEWA’s programs in Iraq and neighbouring countries, he said.