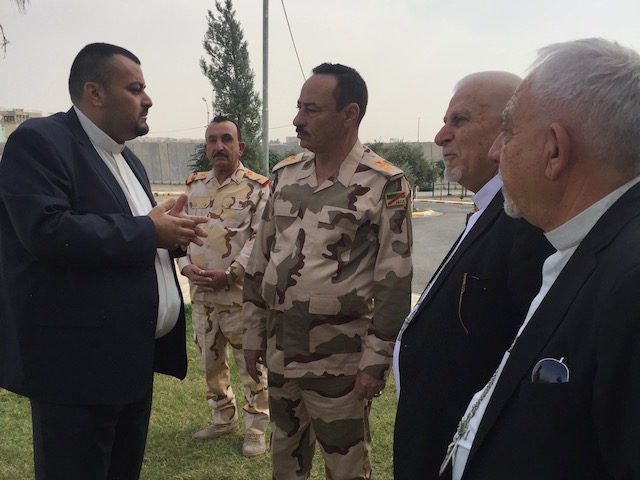 In an interview in his Mosul office, General Zebari detailed a series of recent arrests of ISIS fighters who had gone to ground in the Mosul area after the end of major military operations last year.

“We found one cell of seventeen fighters trying to reconstitute themselves into an active terror cell,” General Zebari said. “When we arrested them, they were carrying fake IDs, money, weapons, and communications equipment. They told our interrogators, ’our leaders are in Turkey.’”

ISIS continues to be led by foreign fighters – Chechens, Afghans, Syrians, and Pakistanis – based inside Turkey, General Zebari said: “Here in Mosul, they are moving into new neighborhoods. During the occupation, there were around 30,000 to 35,000 ISIS fighters in Mosul. Of those, 7,000 were killed, 7,000 escaped, and 7,000 we arrested. We believe around three to four hundred remain underground.”

To avoid attracting attention to their activities, he noted, ISIS is increasingly using women as couriers. “Just two weeks ago, we arrested a woman who was distributing money to ISIS families in and around Mosul,” General Zebari said. “She told us that her leader was in Turkey.”

“In recent months, we have arrested forty women just in our sector, which is East Mosul. These women are being used to reconstitute ISIS and handle communications, logistics, messages, and money. They were protected and aided by the Turkish government,” he said.

Asked about reports that Turkish President Erdogan’s daughter had built hospitals just inside Turkey along the Syrian border to treat wounded ISIS fighters, General Zebari was unequivocal. “That is true. We see an ongoing pipeline to ISIS from Turkey. If ISIS reappears, it will be because of Turkey.”

On the upside, General Zebari believes that ISIS is finished in Mosul itself. “The people have rejected ISIS and inform us of their movements,” General Zebari said.

General Zebari and the Iraqi commander of anti-ISIS operations, Maj. General Najim al-Jabouri, detailed in separate interviews a dramatic turn-around in relations between the Iraqi security forces and the predominantly Sunni population of Mosul.

“Before ISIS came to Mosul, even I – a police chief – wanted to be saved from the injustice of the Iraqi state. We said at the time, the whole people of Mosul are in a prison because of the behavior of the Army and the federal security forces toward them,” General Zebari said.

The problem was that the overwhelming majority of Iraqi army troops stationed in Mosul were Shia Muslims from southern Iraq. Arbitrary roadblocks and daily harassment of the Sunni Muslim inhabitants were then common, he claimed.

“I could not visit my family – me, a General!” Zebari said. “So imagine what it was like for poor families held up at checkpoints and harassed on a daily basis.”

General Najim al-Jabouri became a familiar face to Iraqis and to Americans during coalition operations against ISIS. He believes that Mosul, today, is safer than any other city in Iraq.

“It’s not me who says this but the Minister of Interior,” he said. “The security situation does not depend on the security forces but on the people. If you win the people you beat the terrorists, you win the battle.”

“In Mosul, we have won over the people,” he affirmed. “But before 2014, when Mosul fell to ISIS, not even the local Governor could go outside this building. Christians and Sunnis could not go to government offices or the university. People could not go to the market. All this was because of al Qaeda, or ISIS.”

The military and security forces contributed heavily to the ISIS takeover in June 2014, he said. “Before 2014, relations with the people were very bad. People looked to the security forces as the enemy.”

Once al-Jabouri took over military operations against ISIS, he worked hard to change that equation.

Since 2015, we realized we must work day by day to build bridges to the people. Now, as commander, I can sit with Kurdish peshmerga leaders in restaurants at night. Before, that was impossible. More than 300,000 people celebrated New Year 2018 in the streets of Mosul until 3 o’clock in the morning. Things have changed in the mind of the people. They won’t grant safe haven to ISIS again.

New problems have arisen, however, with the emergence of the Popular Mobilization Forces (PMF). These are comprised of more than sixty-five “brigades,” many of them backed by Iran or loyal to the head of the Badr Organization, Hadi al-Amiri, an Iranian-backed politician in Baghdad.

“Not all the PMF are bad,” General al-Jabouri said. “Some of them fought with us against ISIS and sacrificed. But others are very bad. We do not need the PMF in Mosul, or in the Nineveh Plain. We have asked Baghdad many times to keep them outside, without success.”

“What we need here in Mosul and especially in Nineveh are local police recruited from the people of the area. We can put some troops there from the army, outside the towns, to support them. But inside, security should be handled by local forces.” General al-Jabouri believes that the battle against ISIS – which united Sunnis, Shias, Kurds, and Christians – could help Iraq to move beyond the sectarianism that has crippled post-Saddam governments and led to ongoing civil war. “We look to the future. [Outgoing] Prime Minister Haidar al Abadi worked hard to defeat ISIS. I hope the new government won’t go backward. We have missed many chances to rebuild Iraq.”

General al-Jabouri was one of several nominees to become Defense Minister in the new Iraqi government last week, and in the interview did not hesitate to speak out on political issues. “ISIS and some Iraqi politicians destroyed the fabric of Iraq. Christians have lived here for thousands of years and have deep roots. Yazidis, too. Our fathers lived together. ISIS worked very hard to destroy this fabric.”

“I don’t like our Constitution,” he added. “Our constitution also destroys the fabric of Iraq. It says Iraq is Arab, Kurd, Turcoman, Shia, Sunni, Christian. This is not a Constitution: this is ISIS. A real constitution would say, We the People. We, the citizens.”

Kenneth R. Timmerman was jointly nominated with Amb. John Bolton for the Nobel Peace prize in 2006. His latest book is Isis Begins: A Novel of the Iraq War.