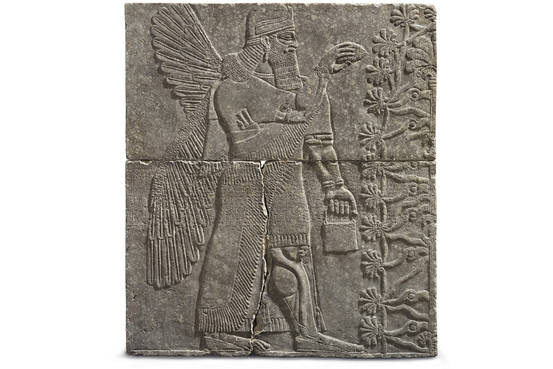 By Fang Block
An important Assyrian relief offered by the Virginia Theological Seminary is expected to fetch up to $15 million during Christie’s classic week auction. Illustration: Christie’s
Christie’s New York will auction an important Assyrian relief on behalf of the Virginia Theological Seminary, the largest accredited Episcopal seminary in the U.S., which has housed the ancient sculpture since 1860.

The relief is expected to net between $10 million and $15 million on Oct. 31 to underwrite a scholarship fund at the seminary, according to Christie’s.

Relief, from the Latin verb relevo, is a type of sculpture that the sculpted material is raised above the background plane. Large-scale carved limestone reliefs were often used by Assyrian kings (2500 B.C. to 609 B.C.) to adorn the walls of their gigantic palaces.

The 3,000-year-old relief was sold by the English archaeologist Sir Austen Henry Layard to Henri Byron Haskell, an American missionary in 1859. Haskell gave it to the Alexandria, Va.-based seminary in 1860, making it one of the earliest-known examples of ancient art to reach American soil, says G. Max Bernheimer, international department head of antiquities at Christie’s New York.

“This Assyrian relief is without question the most exquisite to come to the market in more than a generation, in terms of the style, condition, and subject,” he says.

The last example of Assyrian relief, depicting two figures that were only preserved from the waist up, was sold by Christie’s London for a record £7.7 million in 1994. By comparison, this relief has a complete figure preserved from head to toe, Bernheimer says.

The seven-foot-tall relief depicts a deity, known as an Apkallu, wearing robes, a horned headdress, an earring, a necklace, and armlets. The feather-winged deity holds a bucket and a cone-shaped object, signifying fertility and protection for the king.

Another relief acquired by Haskell is housed at the Metropolitan Museum of Art in New York. Approximately 60 museums around the world contain reliefs from Ashurnasirpal’s palace, including the British Museum, the Brooklyn Museum, and the Yale University Art Gallery.