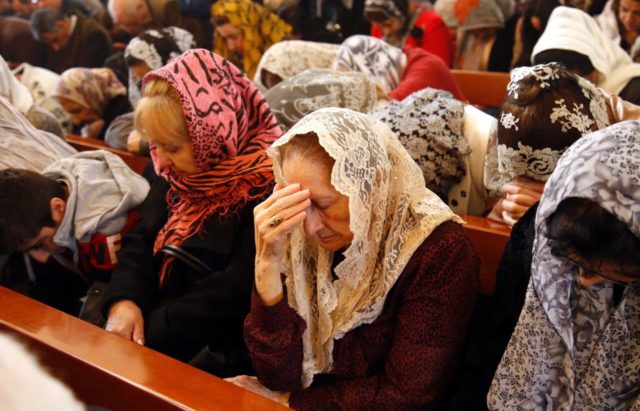 LEBANON-SYRIA-IRAQ-RELIGION-CHRISTIANITY-CHRISTMAS
ANWAR AMRO/AFP/Getty Images
The Assyrian Church in Syria may have paid more than a million dollars to the Islamic State (ISIS) in extortion fees, the New York Times claimed in a report Wednesday.

The report, published on Wednesday, details the plight of Christian communities across Syria amid the country’s brutal civil war, many of which have been subject to persecution and brutal attacks by ISIS. The situation has led to a major decline in the nation’s Christian population.

The caliphate sought to make money off of the Assyrians, a group of indigenous Middle Eastern people spanning areas in Turkey, Iraq, and Syria, whom they believed would have relatives abroad willing to pay large sums to secure their freedom, the New York Times notes.

Most Assyrians are Christians associated with either the Assyrian Church of the East or the Chaldean Catholic Church. According to the Times, while jihadists would usually kill or enslave Shiite Muslims and Yazidis, they would often secure up to $50,000 for the release of individual Assyrian hostages.

“When the Islamic State began its rampage across Iraq and Syria, the jihadists killed or enslaved Shiite Muslims and Yazidis, but they sought to make money off the Assyrians,” the report claims. “The church has never revealed exactly how much it paid the Islamic State, but most assume it was more than a million dollars.”

Approximately 10,000 Assyrians lived in Syria across 30 villages before the onset of the war in 2011, while there were more than two dozen churches. Nowadays, only 900 Assyrians remain, while the Assyrian Church of the East has just one church still holding regular religious services.

“More Syriac Christians live outside their ancestral homelands than in them. It’s possible that if present trends hold, there will be more Syriac Christians in the United States and Mexico than in Iraq,” he wrote last month. “These are the people we have been praying for when we pray for the persecuted—and they have a lot to teach us, not the least of which is how to remain faithful in the face of unimaginable oppression and persecution.”