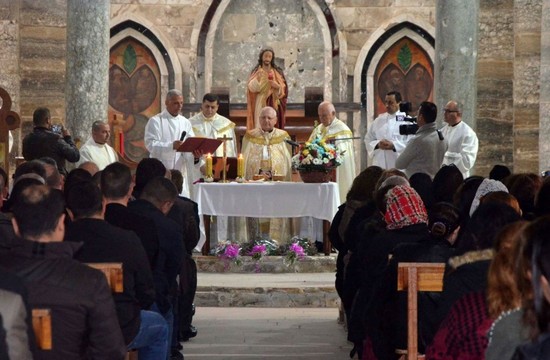 Exactly four years after the ISIS invasion of the Nineveh plain, Iraqi Christians who did not leave their homeland are now returning to their villages even as Iraq’s Chaldean bishops have met to study the “main challenges” facing the country and the church.

As he opened the Synod of Bishops meeting in Baghdad, Cardinal Louis Raphael Sako, the Chaldean patriarch of Babylon, sought to highlight what he characterized as “a turning point” in the history of the Chaldean Church.

Four years after ISIS invaded the Nineveh plain, this small Eastern Catholic Church, which is also numerically the largest in Iraq, still has its back to the wall, as does the whole country.

On the night of Aug. 6-7, 2014, some 120,000 Christians, mostly Syrian and Chaldean Catholics, fled in panic from the villages around Qaraqosh and sought refuge in the churches, parks and gardens of Erbil in Iraqi Kurdistan.

Now, four years later, ISIS has been pushed back and exiled families are beginning to return — at least those who have not sought exile in Europe, North America or Australia.

However, the events of that period has caused immense damage.

“The international community was slow to act and Iraq is now paying the price,” he said. “Cities and villages were partly destroyed and populations terrorized. Many are still dazed and no longer see a future in their country.

“In fact, there is no future for Christians if the nation as a whole does not return to peace and freedom,” he warned.

A statement issued by the Patriarchate of of Babylon noted that, in his opening speech to the Synod meeting, Cardinal Sako highlighted the main challenges facing Christians and the Chaldean Church in particular.

“He expressed his particular concern over the delay in forming a new Iraqi government, the rise in social protests and the persistence of corruption mechanisms,” the statement read.

The whole of Iraq, ranging from from its economy to government institutions, requires rebuilding, Msgr. Gollnisch said.

Iraq also “needs to build a future without any regional foreign influence,” he told La Croix.

The country also needs to re-establish the very concept of co-existence between Christians, Sunni and Shia Muslims, Shabaks, Kakais, Mandeans, and other groups, he added.

The situation of the Christian churches is particularly serious, he said. Weakened by the emigration of two thirds of their members, these churches have still not recovered from the disaster. They fear being reduced to the state of “witnesses” of a glorious past as is the case with their sister churches in Iran and Turkey.

Nevertheless, despite the difficulties, “some church members still want to return to their land,” Msgr. Gollnisch said.

Several thousand people have already returned to Qaraqosh, the most significant of the Christian majority cities on the Nineveh plan. Many schools and convents have already re-opened.

Around 25 percent of the city’s dwellings, which were the least damaged, have been repaired. Christian aid and solidarity organizations such as Aid to the Church in Need, Oeuvre d’Orient or Fraternité en Irak have greatly assisted with this task.

These organizations are still calling on donors to maintain their generosity during the period of reconstruction.

On Aug. 6, Iraqi Christians commemorated the fourth anniversary of the ISIS invasion by organizing a procession in Karamles, a small mostly Chaldean village on the Nineveh plain, where 300 families have returned since December.

As well as electing new bishops for the vacant dioceses, the Chaldean bishops during their Baghdad Synod meeting, also sought to study the situation of each diocese and its respective priorities.

The meeting also endeavored to explain the financial situation of the patriarchate “in complete transparency,” the statement read.