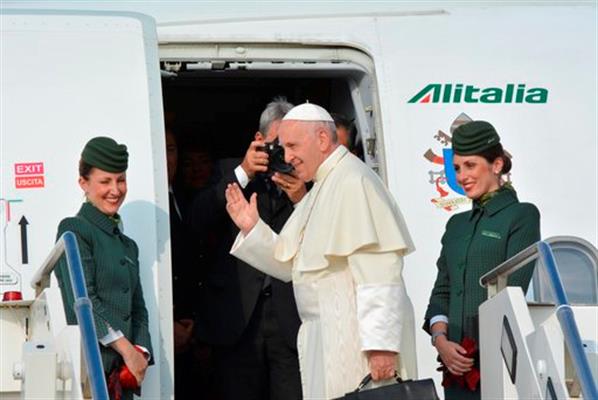 Pope Francis salutes as he boards the airplane for the ecumenical pilgrimage to Geneva, at the ‘Leonardo Da Vinci’ airport in Fiumicino, in the outskirts of Rome, Thursday, June 21, 2018. The visit is part of celebrations marking the 70th anniversary of the World Council of Churches. (Telenews/ANSA via AP)

GENEVA (AP) — Pope Francis journeyed Thursday to the well-heeled city of Geneva to encourage all Christians, despite their differences, to join in efforts to foster justice and fight poverty while the rich grow “ever more wealthy.”

The pontiff’s day-long “ecumenical pilgrimage” to the lakeside Swiss city that embraced the Protestant Reformation was aimed at stressing what can unite, rather than divide, Christians.

During his visit, Francis met with a group of Korean Protestants, four from the North and four from the South. Their handshakes and smiles built on the pontiff’s oft-voiced hopes for peace and unity on the Korean Peninsula, especially with the recent summit of U.S. and North Korean leaders.

Francis pitched for greater togetherness at an ecumenical prayer service hosted by the World Council of Churches, which is marking its 70th anniversary this year. The WCC is a fellowship of 350 churches that aims to show the unity of the Christian faith. The Roman Catholic Church is not a member.

The Rev. Olav Fykse Tveit, a Lutheran minister from Norway who is the WCC’s general secretary, told reporters he hoped the pope’s greeting will be a “gesture that will inspire” the Koreans.

Korean Protestants regularly attend the Council’s meetings, but the show of unity comes amid a thaw in relations between the two Koreas and between the United States and North Korea.

A day earlier, Chairman Myong Chol Kang of the Korean Christian Federation, which has the stamp of approval from Kim Jong Un’s regime, told WCC’s central committee: “Peace has begun to emerge on the Korean peninsula, which has been struggling with nuclear confrontation and war.”

He said the world welcomed “the dramatic events that could not even be imagined until just a few months ago on the Korean peninsula and the surprise of the new era of peace,” before quoting from Matthew: “Blessed are the peacemakers, for they will be called children of God.”

The council describes the KCF as “post-denominational” but with Protestant roots, particularly the Methodist and Presbyterian faiths.

Addressing an ecumenical gathering, Francis said Christians were called to “respond to the cry of all those, in every part of the world, who suffer unjustly from the baleful spread of an exclusion that, by generating poverty, foments conflicts.”

“The more vulnerable are increasingly marginalized, lacking their daily bread, employment and a future, while the rich are fewer and ever more wealthy,” the pope said. “Let us see what we can do concretely, rather than grow discouraged about what we cannot.”

One of the council officials who addressed Francis, Agnes Abuom of the Anglican church of Kenya, told the pope that she and other women at the gathering had chosen to wear black as a reminder of violence against women. She said they seek to bring an end to the “pestilence” of such violence.

Earlier in the day, the pope told his non-Catholic Christian hosts: “I have desired to come here, a pilgrim in quest of unity and peace. I thank God because here I have found you, brothers and sisters, already making this same journey.”

In remarks of welcome, U.S. Methodist Bishop Mary Ann Swenson told the pontiff that his visit “has inspired and enthused” those making a “common journey of pilgrimage of justice and peace.”

In his first speech of the day, Francis said that “all you need to do is read history” to see how religious divisions have led to wars and destruction.

But “our differences must not be excuses,” he said, adding that it was possible to “pray, evangelize and serve together.”

His last public event was an early evening Mass at an exhibition hall near the city’s airport that is known for hosting international auto shows.

After giving a final blessing in French to some 40,000 faithful, many of whom had come from France for the occasion, the 81-year-old pope missed a step as he started leaving the altar area on a raised platform. Francis quickly grabbed hold of an aide who had given the pontiff his arm to guide him down the steps, and that helped keep the pope upright.

The pontiff then walked out by himself in a procession of clergy.

Francis, who has used his papacy to champion the causes of peace and justice, has often suggested that Christians can work closely together on humanitarian projects.

He has been a big supporter of efforts by a Rome-based Catholic charity and the Waldensian Evangelical Church to bring Syrian refugees to Italy on special flights known as “humanitarian corridors” so that those fleeing war won’t have to risk their lives at the hands of migrant traffickers.