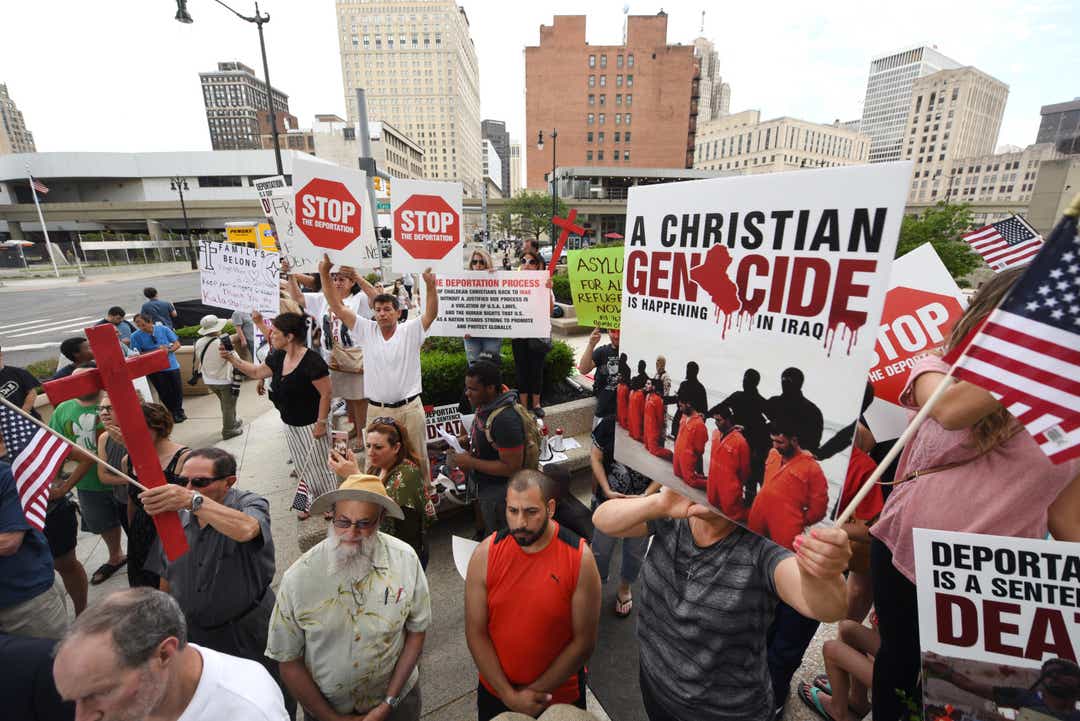 A federal judge in Detroit issued an order Wednesday to stop federal immigration agents from pressuring Iraqi immigrants into agreeing to be deported, thereby giving up their legal rights to remain in the United States.

According to the order, Immigration and Customs Enforcement officers and the Department of Homeland Security employees “shall not threaten prosecution, project or suggest how long they might remain in detention, projecting when or suggesting they will be sent to Iraq, and must inform detainees they can not be punished.”

The order is the latest development a class-action lawsuit the ACLU filed in June 2017 to halt federal immigration officials from deporting more than 1,400 Iraqi nationals swept up in raids by ICE last summer. More than 100 detainees were from Metro Detroit. About 130 detainees remain in custody, said Mariam Aukerman, an ACLU senior staff attorney.

The ACLU told Goldsmith that, since August, ICE officers have threatened detainees to sign documents stating they wanted to be sent back to Iraq or face further prosecution in the United States,Aukerman said.

“They were threatened with punishment, told they would be deported or would stay in detention for years and that their only way out was to sign a deportation document,” Aukerman said Wednesday. “They face grave danger if they return to Iraq, and to force them to go back to face that fate is appalling. We are very pleased with the judge’s ruling and it’s an important order because now they can not continue the abuse and coercion.”

Aukerman said 33 detainees, whom Iraq has agreed to readmit and has issued travel papers for, signed documents. Six detainees did not sign papers to return to Iraq.

As of this week, 42 detainees have been sent to the Stewart Detention Center in Lumpkin, Georgia. It’s unclear how many are from Michigan and how many remain at the Northeast Ohio Correction Center, which housed the majority of detainees after the sweep.

ICE officials said in court Monday that they were unable to comment on the court order.

The order Wednesday also requires government officials to permit lawyers to meet with detainees after ICE refused entry to the lawyers over the last year and prohibited phone calls to facilities.

“Unlike a normal attorney relationship, here, our clients are locked up and extremely difficult to get a hold of them,” Aukerman said. “We can now meet with them before they have interviews where the documents are presented. We’ve been granted basic lawyering.”

Ashourina Slewo said her father, Warda Slewo, often was forced to sign documents while he was detained at the Youngstown center in Ohio.

“My dad can’t read English so it’s unclear if he signed that specific paper, but there were times where they would tell him to sign and he would have no idea what they were,” said Slewo. “Without a lawyer looking at them, we worried they were trying to coerce him into basically signing his life away.”

Warda Slewo, 51, was arrested outside his Madison Heights home after returning from church, swept up in immigration raids that Trump administration ordered last year. Slewo, an Army veteran who also served time in jail and probation for criminal sexual conduct, was reunited with his family in March.

“It was scarier for me, I think,” said Ashourina Slewo, 23. “I’m the one who handles everything for my dad as far as paperwork and wanted to help him understand what they were giving him but I couldn’t.”

The ACLU anticipates returning to court to fight for relief for the 130 people still in detention.

“We believe they’re being held unlawfully and are asking for further relief,” said Aukerman. “The government can’t hold people because they’re Iraqi. They have to be in holding for deportation.”