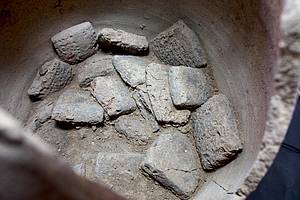 Iraq Mardaman identified
(Peter Pfalzner, University of Tübingen)
TÜBINGEN, GERMANY—Live Science reports that a site in northern Iraq has been identified as containing the ruins of the lost city of Mardaman. Philologist Betina Faist of the University of Heidelberg found the city’s name in the texts of 92 cuneiform tablets that were discovered in a pottery vessel by a team of archaeologists from the University of Tübingen, who started excavating the site in 2013. The tablets date to about 1250 B.C., when the city was part of the Assyrian Empire and strategically positioned on trade routes connecting Mesopotamia, Anatolia, and Syria. Peter Pfälzner of the University of Tübingen suggests the tablets may have been buried at the palace site around the time the building was destroyed, since the jar was covered with a thick layer of clay that protected and preserved the tablets. To read in-depth about cuneiform tablets, go to “The World’s Oldest Writing.”