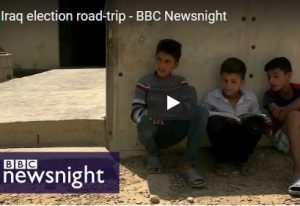 BBC Newsnight / Ayman Oghanna
How influential is Iran in the politics of Iraq? Ahead of the Iraqi general election, 15 years since Saddam Hussein was toppled, reporter Ayman Oghanna, producer Warwick Harrington and cameraman Jack Garland went on a road-trip across the country to find out what’s at stake.